G. Elliott Morris, the Economist data journalist, looked into some of the VA traditional exit poll claims and finds them, essentially, unbelievable. I agree.

“[The traditional exit polls show] show that Democrats made gains with Latino and Asian voters between 2020 and 2021 despite their declining vote share statewide. According to Edison, Youngkin won in Virginia because McAuliffe’s share of the two-party vote with whites fell by eight points relative to Biden’s share with the group last year.

This is not unbelievable in isolation. Eg, perhaps Latino voters were just particularly drawn to Trump last year, and so have now reverted to their typical Democratic lean. However, this is a weird result when you consider that it is rare for a party to improve significantly with a group when their overall vote share falls by six points over a year. Usually, the public moves in more parallel strides. (NB: There is more heterogeneity on longer time horizons, to be sure.)

The Edison exit poll starts looking a lot stranger once we look at swings among white voters by their education level. According to Edison, McAuliffe won just 24% of white voters without degrees. That’s compared to Joe Biden’s 38% just a year ago — making for a 14-point decline. And according to their exits, college-educated whites and voters of color did not change significantly since 2020:

OK, now things are starting to fail the smell test. Maybe you believe non-college-educated whites moved right since 2020. That is a reasonable assumption; Biden is less popular than he was a year ago and, after all, Democrats did lose the election! But do we really believe that the only group to change its political leaning since 2020 was whites without degrees? In an election where overall Democratic margin fell by ten points? That explanation falls flat even before we look at other evidence.

How is this reconcilable with the exit poll? The short answer is that it’s not. While it is technically possible that white college-educated voters in counties with a lot of non-college whites are driving the trends in the figures above, that wouldn’t explain the full relationship. Besides, according to Edison, college-educated whites didn’t change their behavior at all since 2020! And there aren’t enough non-whites in these counties to drive significant trends either; the exits estimate voters of color made up just over a fourth of Virginian voters in 2021, and there are fewer of them in the counties with the highest shares of non-college whites.

As if this weren’t enough, friend of the blog Lenny Bronner (who runs the elections-forecasting models for the Washington Post) found that McAuliffe did worse versus Biden in the precincts with the most African Americans and Hispanics. This is a direct contradiction of the exit poll!”

Ridiculous. These data are just not trustworthy. And yet political journalists continue to write story after story based on them, since the traditional exit poll fielded by Edison still has dominant market share in the media. That should change. Until then, caveat emptor. 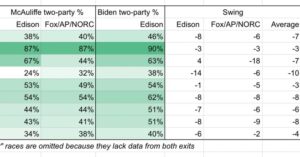 One comment on “Teixeira: Stick a Fork In ‘Em: The Exit Polls Are Done”