The new paper by Micah English and Joshua L. Kalla, Racial Equality Frames and Public Policy Support: Survey Experimental Evidence, has gotten quite a lot of attention and deservedly so. Through a clever survey experiment, they show quite clearly that racial framing detracts from support for progressive policies relative to a class or even a neutral framing. This indicates that Democrats are marketing their policies poorly to the extent that they use racial framing to urge support for essentially race-neutral policies that will disproportionately benefit blacks and Latinos because they are disproportionately poor and disadvantaged. Therefore by increasingly relying on racial framing for progressive policies they are actually hurting the very constituencies (the black and Latino poor) they are so intent on helping.

The conclusion to the paper is worth quoting in full:

“As we have demonstrated, despite leftward shifts in public attitudes towards issues of racial equality, racial framing generally decreases support for progressive policies. Despite increasing awareness of racial inequities and a greater use of progressive race framing by Democratic elites, linking public policies to race is detrimental for support of those policies. Importantly, our results showed that Black Americans were just as swayed by the class frame as they were the race frame. Future research should investigate the causal mechanisms behind this.

As Mendelberg (2001, p. 187) detailed in her examination of racial appeals: “Democrats are correct in perceiving that their best interests lie in shifting the electoral agenda away from race and toward economic issues on which blacks and working class whites can agree. The Democrats can still pursue racially liberal policies while in office, and in fact it is in their interest to do so. By eroding racial inequality they will aid in bridging the racial divide that renders them so electorally vulnerable. But as many African Americans recognize, highlighting these efforts to white voters is likely to erode Democratic support among whites.”

It appears that this still holds true today. Democrats’ use of racial frames in describing their progressive policies may inadvertently make it harder for them to adopt public policies that will advance racial justice.”

Note particularly that the racial frame doesn’t even increase support among blacks for progressive policies. I would also note that it doesn’t matter why support among whites is decreased by a racial framing–that is, whether it’s “racial resentment” or the simple fact that when you’re highlighting how a policy will benefit a particular group, those not in the group will then tend to wonder what’s in it for them. The effect is the same: a racial framing does not work to increase support for progressive policies, it decreases it. Therefore, you shouldn’t do it.

A further note, discussed in the paper, is that the findings, while striking, are hardly a one-off. A wide range of studies and survey evidence has shown the same pattern. (See the graphic below for one of many examples, taken from a recent CAP poll.) 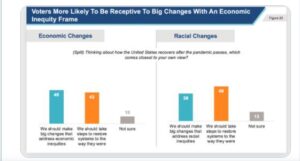 I will close by reiterating a principle I put forward in a recent post.

This principle is more relevant than ever, given the current vogue for attaching the word “equity” to virtually everything the Democrats are advocating and frequently seeming to justify race-neutral and popular polices on the grounds that they would promote racial equity. As politics, this makes no sense. You are taking policies that have great appeal to persuadable voters–otherwise they would not be so popular–and framing them as equity policies, which will reduce their appeal to persuadable voters who have non-liberal views on racial issues.

This is a very bad idea. There are far more persuadables who support progressive economic positions but are non-woke on racial issues than there are those that are woke on racial issues but don’t support progressive economic positions. So framing race-neutral, popular Democratic economic programs as equity programs is a very poor tradeoff in support and electoral terms.

What more do you need to know?

2 comments on “Teixeira: The Negative Payoff to Racial Framing of Policy Issues”