If you’re baffled by the direction of so-called “progressive” politics these days, you’re not alone. An intellectual and political movement once grounded in the reformist policies of the earliest progressives—and the universal principles of 20th century American liberalism—has given way to a well-funded network of activists, academics, and social media denizens who reject these principles in part or wholesale.

In place of a commitment to individual freedom, political equality, and social welfare policies designed to offer people protection from hardship and a hand up in life, today’s progressives organize themselves around abstract theories of oppression and power relationships grounded in racial, gender, and religious categorizations. Where liberals and the early progressives saw deep flaws in American society and set out to create practical solutions to achieving greater equality and freedom for all people, modern social justice progressives see a country irreparably broken by “400 years of systemic racism” and seek to overturn perceived social and cultural hierarchies in favor of historically oppressed groups. Older liberals once fought for laws and regulations to overcome racial and gender discrimination and increase individual rights, while modern progressives increasingly fight over language, representation, group-based accusations, and who is allowed to say or think what.

Likewise, 20th century American liberalism and progressivism was strategically and politically focused on building the majorities necessary to put in place some of the most important reforms in our history. This involved rallying reformers and voters across the political spectrum. Although the Democratic Party of FDR, Truman, and LBJ—alongside a powerful labor movement—led many of these liberal reforms, pro-civil rights and pro-social welfare Republicans also played a major role passing legislation and standing up against reactionary elements in society. 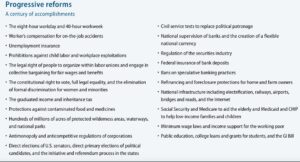 In contrast, much of contemporary progressive politics seems markedly apolitical and strategically unfocused with activists more content firing off social media shots from the sidelines and complaining about people ignoring them rather than persuading people in different parts of the country—and from different political backgrounds—to join in a common cause for reform.

There are many different explanations for why this shift happened. But one that is often overlooked is the changed intellectual infrastructure sustaining liberal politics.

A young person looking for a solid reform-based liberal education and philosophical training today would be hard pressed to find it anywhere in the billion-dollar progressive infrastructure of contemporary politics. They could however find lots of “conversations” about structural oppression and extended Twitter threads and digital media trainings to combat “white privilege” and advance abstract notions of “equity.”

Conservatives (prior to the Trump years) have generally done a much better job laying the groundwork for long-term reflection on first principles and the foundations of American life based on their commitment to free enterprise, Judeo-Christian values and beliefs, and individual rights. Much of this work involves policy and intellectual development for emerging movement leaders.

As Molly Worthen explained in an interesting overview of these intellectual efforts:

These conservative seminars make an enormous impact simply by taking students seriously. “They’re not at the children’s table,” said Tom Palmer, who directs Cato University, a program that mixes undergraduates with midcareer professionals and retirees. “No one pinches their cheeks and tells them how cute they are.”

There is another insight here: the power of teaching the canon. Most of these programs conceive of the canon far too narrowly, but the canon is an elite debating society that anyone can join. It shows students that the struggle for freedom and justice began long before the 1960s, and that this deep history lurks beneath today’s policy debates.

Unfortunately, at most universities, studying political philosophy has become a form of countercultural rebellion, a discipline marginalized by courses in supposedly practical subjects like business and communications. Campus activists may learn organizing strategies and the argot of identity politics, but few study the history of their own ideas.

It’s not as if liberals and progressives lack these foundations. Sadly, too many universities and elite progressive training programs choose not to emphasize them in their politics, or to engage intellectually with other philosophical understandings of politics, whether radical or conservative. As Worthen writes:

Yet for all its relativism and wonkishness, the progressive tradition grew from firm ideological commitments: a faith in human equality and empathy; the rule of law; the scientific method. Progressives can find kindred spirits among classic conservative thinkers: Adam Smith on moral sentiments, Edmund Burke’s critique of imperial power. You can’t fully understand the theology of the Rev. Dr. Martin Luther King Jr. without grasping Augustine’s doctrine of original sin. But few young progressives read these authors. The hyperspecialized, careerist ethos of mainstream universities has served them just as poorly as it has conservatives.

The lack of a fortified intellectual infrastructure supporting traditional American liberalism is a big challenge. So what needs to be done?

The first order of business for liberals is to recognize the depth of the problem. Identity-based politics, on the left or the right, will not just disappear on its own. The incentives for this kind of politics have grown immensely in recent years, and it will have to be counterbalanced by an equally well-supported effort from liberals on both the center-left and center-right.

The second order of business is for those with resources to increase their support for strategies to uphold genuinely liberal values—such as freedom, equality, pluralism, tolerance, rationality, and a commitment to the common good—and help rebuild liberal education and political work in America. Lots of self-funded groups are doing yeoman’s work along these lines. But if liberals really want to push back against the cultural extremism ascendant on the left or right, they will need to build their own institutions and programs to develop new leaders, grow new social movements, create new policies, and influence political parties based on genuinely liberal principles.

American liberals need to step up financially and politically to support projects grounded in the belief that “all human beings are born free and equal in dignity and rights” and focused on pragmatic policies to steadily improve the lives of all people.

2 comments on “Halpin: Liberals Must Rebuild Their Intellectual Infrastructure. Sectarian politics will only be defeated through a long-term commitment to equal dignity and rights for all people”