I like to think that if Che was with us today that would be his uncompromising cry. Well, maybe not. Anyway, people really love to complain about Joe Manchin. But the ineluctable fact is that the Democrats would be two slices of hot buttered toast without him. So rather than complain about Manchin, which won’t do any good anyway, people on the center-left should be thinking hard, really hard, about how we can get *more* Joe Manchins.

The road to sustainable progressive governance lies through an expanded Democratic Senate majority. No substitutes.

Fanciful proposals to abolish the Senate or air-drop a bunch of lefty states into the Senate are not serious proposals. Progressives who do not have plausible ideas about how Democrats can capture Senate seats in redish states like IA, OH, NC, TX and FL are kidding themselves that they have a viable political strategy for the actually-existing United States, as opposed to some mythical country of their imagination.

David Leonhardt nails it in his column this morning, which includes this fantastic graphic, which smart Democrats should affix to a wall near their computer. And look at carefully before they fire off their latest tweet denouncing Joe Manchin.

“The structure of the Senate has not always favored Republicans. But in recent decades, heavily white and rural communities have moved to the political right. Because these communities dominate many small states, and because small states enjoy a lot of power in the Senate, it now has a large pro-Republican bias.

So how have Democrats nonetheless won control of the Senate, allowing them to pass an ambitious bill last week that will reduce poverty, lift middle-class incomes, cut the cost of health insurance and more? There are two main answers.

First, the Democratic Party has been the more popular political party nationwide for most of the past three decades, and this national edge sometimes allows it to overcome the Senate’s built-in bias. Last year, Joe Biden won the popular vote by 4.4 percentage points. That was enough for him to win exactly half of the country’s 50 states and for Democratic Senate candidates to flip seats in Arizona and Georgia.

Without him, there would be no Democratic Senate right now and no $1.9 trillion virus relief law. It’s unclear how many of Biden’s cabinet nominees would have been defeated and how successful the president would be at putting federal judges on the bench….

Few things in American politics are as valuable to a party as people like Manchin, Tester and Collins. And finding more such politicians is even more important to the Democratic Party because of the Senate’s pro-Republican bias.

As Matthew Yglesias writes in his Substack newsletter, addressing progressives: “If you don’t want your governing agenda perpetually held hostage to Joe Manchin (or for a majority to be out of reach if Manchin retires in 2024), then you need to win Senate races in right-of-center states like Iowa, Ohio, North Carolina, Texas and Florida that just aren’t as right-wing as West Virginia.” 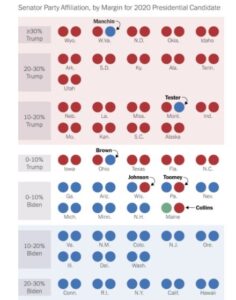