Mike Freedberg of Here and Sphere shares an instructive graphic that helps explain the Georgia flip to an Electoral College blue state: 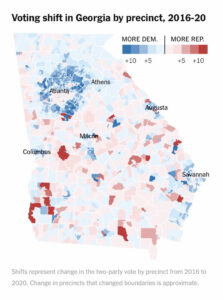 A map of voter shifts, precinct by precinct, in Georgia from the 2016 election to the 2020 tells a lot about how Joe Biden became President-elect. Let’s study the map, pictured above, and make some determinations based on what is shown.

You will notice, of course, the enormous shift of votes in the Atlanta suburbs, all of them, as well as in greater Savannah (the blue precincts on the coast). As happened in suburbs all over America, Joe Biden won tons of votes that Hillary Clinton lost. This part of the Biden win in Georgia is common knowledge. Absent this vast a shift, Biden could not have won Georgia by some 12,880 votes. Everything that follows this shift depended on it, and Biden certainly is aware that he will be the President of suburban America.

The voters who so drastically moved away from, Mr. Trump are middle class, mostly, and overwhelmingly white. Their entrance into the Democratic coalition changes the party — as I have previously written about — from being a mostly working-class party to a party chiefly of educated affluents.

However, Freedberg adds, “Joe Biden did not carry Georgia by suburban voters only. Two other outcomes played an equally cruicial part :

( 1 ) almost all Black voters chose Biden, but not more than chose Clinton in 2016. His percentage actually dropped by one percent ( 1% ) from Hillary Clinton’s number. As has been noted by others, Mr. Trump had some success, nationwide, winning more Black votes than in 2016 — not many, but some. Black voters in this Georgia election numbered only 27 percent of the total — down from 30 percent in 2012 — yet even that one percent shift to Mr. Trump cost Joe Biden about 16,400 votes, enough to have moved Georgia into Trump’s column despite the suburban landslide for Biden.

( 2 ) that Mr. Trump’s increase of Black votes did not cost Biden this State is due to a shift among voters who nationwide became Mr. Biden’s crucial success : Biden GAINED one percent of rural white voters, over Hillary Clinton’s totals, mostly in very white North Georgia but also throughout the State. Rural white voters have been Mr. Trump’s base, and he won them big in this election as in 2016 : but not quite AS big. Rural white votes totaled about 25 percent of Georgia’s total, and a one percent shift of them from Trump to Biden was just enough to counter Biden’s 16,400 vote shortfall among Black voters.

Freedberg notes that many believe “Joe Biden, himself of white working class background, was the only 2020 Democratic candidate who could have peeled off enough rural white voters to defeat Mr. Trump.” Further, “Almost no other Democrat running for office this past election won a similar break. Voters in Republican counties did not switch their Congress votes as they did for President.”

Freedberg says that winning both senate seats in the Georgia run-off would be a “difficult task,” which will require “a profounder shift of voter sentiment than the one which benefitted Biden.” Democrats can hope that the historic low turnouts for run-off elections in Georgia provide an opportunity for them to win a disproportionate share of voters. But that will require a heroic GOTV mobilization of pro-Democratic constituencies, a formidable challenge for GA activists.