We are six days out until voting ends on Tuesday, Nov. 3. The ever-present noise machine has the volume turned all the way up, and it’s even louder if you live in a battleground state. But all of us are being buffeted by the news of the day: Everyone around Pence is COVID-positive and he is still campaigning; Amy Coney Barrett was sworn in to RBG’s seat on the Supreme Court and each day there is a new record for COVID cases in the U.S. After all that, Trump’s tax returns, which show an astonishing level of indebtedness and near complete tax avoidance, while perhaps offering a greater explanation of his motivations, are no longer a topic of discussion.

If you are wondering when it will all end, consider what battleground state voters, who don’t necessarily even like politics, think of the deluge they’re experiencing. That, in part, explains why so many have rushed to cast ballots early (they know we will stop calling them).
So, let’s look at what we know about the state of the race today.

Where Do Biden’s Chances Look Strongest?

Last Sunday, Working America surveyed 38,871 battleground-state voters who have already cast their votes and compared those results to responses from people yet to vote whom we have surveyed in the last month. This research approach means we can look beyond the simple ballot returns by voter partisanship or aggregate polling data. By dividing up survey data between those who have voted and those likely voters who have yet to cast ballots, we can get clearer insight on the range of election outcomes.

First, we compared how many ballots have been cast in this year’s contest versus the total 2016 turnout. We found that it’s likely that a majority of the total vote is already in across a handful of states, while others are moving at a slower pace. (Of course, a big unknown is whether voter turnout will surge or decrease and if it does, among which voters, in the last few days — hence we are not making projections on the final tally.) 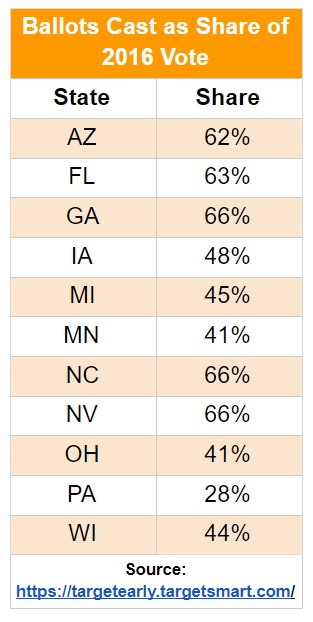 Next, we looked at how the race breaks among early voters. One of the important distinctions between our data and some of the voter-file-based reports is that we see the Biden margin increasing more than partisan identity would suggest virtually everywhere. The difference is that we are reflecting what voters shared with us, while other reports simply use the probable vote choice based on voter file data. 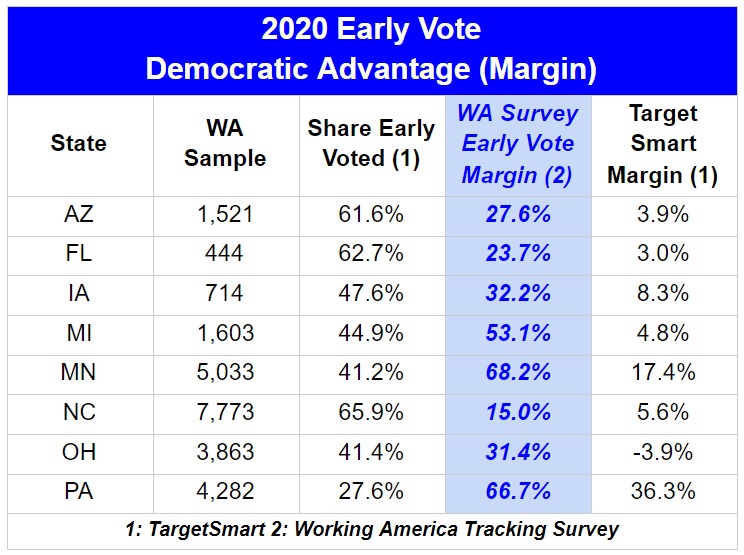 We can also examine where the race stands among those who have yet to vote. Here, the picture is less favorable for Biden, (but still not bad). In states such as Arizona and Michigan, it is notable that Biden is running even with or slightly behind Trump in the remaining vote — a promising indication, especially when combined with his strong leads among early voters. But other states like Florida will be closer calls. 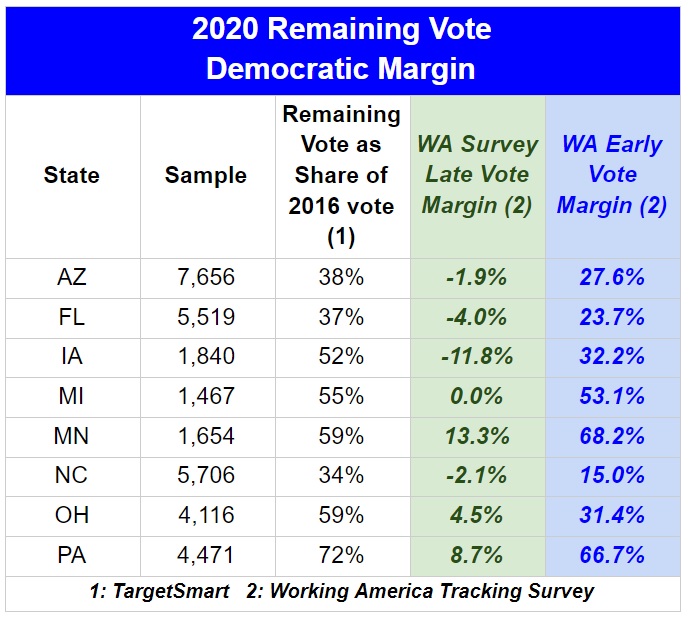 These data tell us that while Democrats are voting earlier and Republicans are voting later in the election cycle, Trump has a steep hill to climb in certain states.

How We (And You) Are Shaping the Outcome

But, more than simply reporting on electoral outcomes, Working America is working to shape them.

Using our 2020 playbook, Working America has fully deployed its electoral outreach program. We continue to reach voters across racial, geographic and political divides to move them to support Biden and pro-worker Democrats up and down the ballot. The map shows where the Working America program has already been making the difference this cycle. For example, if recent testing results are fully replicated on Election Day, we will add 81,212 votes in Pennsylvania, a state Trump won by 44,292 votes in 2016. This is just one part of a national program that’s adding hundreds of thousands of Biden votes, as well as down-ticket candidate supporters. 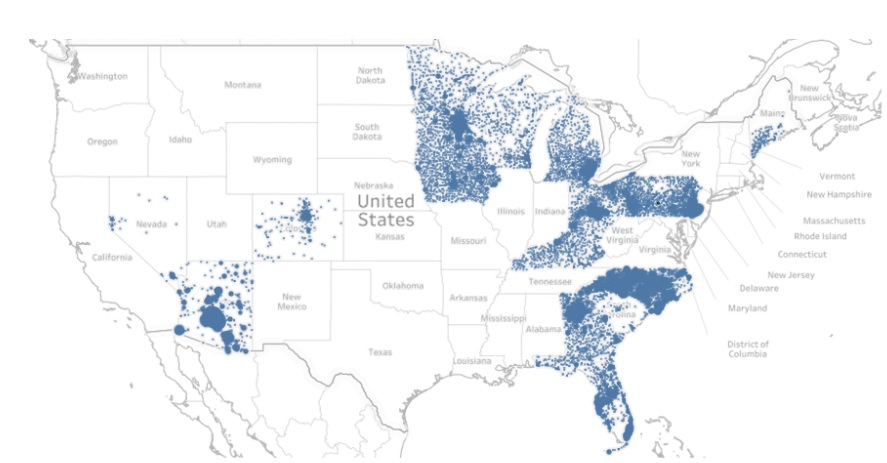 As a down payment on that substantial vote gain, we can confirm we have already banked 24,854 extra Biden votes (from just one program we evaluated) based on the survey conducted Sunday among early voters. We’re picking up every vote possible and continuing to focus on the interests and concerns of voters all the way through Election Day and beyond. Keep up the good work.