It’s out! The new States of Change report on the potential effects of generational change on future elections. And they’re huge! This should put a smile on your face.

In this report, we show that incorporating generational cohorts into one’s analysis has a potentially substantial impact on the political landscape of future elections. We do this using four scenarios:

* No generational effects. This simulation assumes voting and turnout patterns from the 2016 presidential race remain the same in future elections for all demographic groups defined by race, age, education, gender and state. The only thing that changes is the size of these various groups among eligible voters. Such a scenario takes no account of the changing generational composition of the electorate and serves as a baseline for judging the impact of incorporating generational preferences.

* Full generational effects. This simulation assumes that generational political preferences will remain the same in future elections. Put simply, instead of assuming that younger voters vote exactly like older groups as they age, this scenario assumes that each generational cohort will continue to vote in future elections like they did in the 2016 presidential election. Like the first scenario, this scenario also accounts for changes in the underlying composition of the electorate by race, education, gender, and state. Age-related turnout rates for various groups are held constant at the levels assumed in the age-based simulation.

* Generation effects decline with age. This simulation assumes that generational political preferences will carry forward into future elections, as in the second simulation, but also assumes that generations will become more conservative as they age. Like the first two scenario, this scenario also accounts for changes in the underlying composition of the electorate and holds the age-related turnout rates of groups constant over time.

* Post-Millennial generations more conservative. This simulation assumes that generational political preferences will fully carry forward into future elections but assumes that Gen Z and the as-yet unnamed generation following them will be more conservative than the Millennial generation. As in our other scenarios, this scenario also accounts for changes in the underlying composition of electorate and holds the age-related turnout rates for various groups constant going forward into future elections.

There are two key findings from these scenarios.

First, the underlying demographic changes our country is likely to experience over the next several elections generally favor the Democratic party. The projected growth of groups by race, age, education, gender and state tends to be more robust among Democratic-leaning groups, creating a consistent and growing headwind for the Republican party. This will require the GOP to improve their performance among key demographic groups, election after election, just to keep their vote share competitive as illustrated by our first, age-based simulation that includes no generational effects. That simulation finds Michigan and Pennsylvania moving Democratic in 2020, with later elections in the 2020s adding Florida, Wisconsin, Georgia, and North Carolina to the Democratic column.

Second, incorporating generational cohorts into this analysis dramatically accelerates the rate at which America’s political terrain could potentially shift, as shown by our second, generation-based, scenario. That scenario finds Michigan, Pennsylvania, Wisconsin, Florida, and Arizona moving Democratic in 2020, with later elections in the decade adding Georgia, North Carolina, Texas, and Ohio to the Democratic tally.

Even under scenarios where cohorts grow more conservative as they age or younger generations are substantially more conservative, these changes are still far faster than with simulations that consider only age groups and ignore the way generational changes can reshape the electorate.” 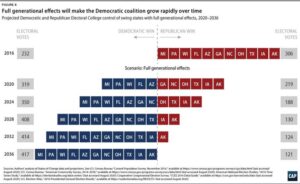