The following article is cross-posted from a DCorps e-blast:

Democracy Corps’ phone, mostly cell poll with 1,500 respondents in sixteen battleground states shows Joe Biden and the Democrats moving into the kind of lead it needs to deny Donald Trump the ability to disrupt Election Day. The poll was conducted after the selection of Senator Harris and the launch of the convention, but prior to the final night acceptance speech.

It shows Biden gaining 3-points in his margin over Trump, reaching 10 points (53 percent). The race showed Democrats stable with a 6-point lead in the generic congressional and up a point to an 8 point margin in the big five Senate contests. That suggests Democrats could win full control in November. That the others moved hardly at all, suggests the Biden gain is sustainable. 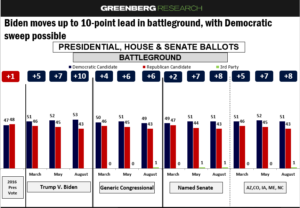 Biden’s gains are produced by his campaign finally concluding the primary, not the convention itself.The percentage of Sanders voters supporting Biden jumped from 73 to 89 percent; the percent of Sanders voters hit 10 on the enthusiasm scale jumped from 80 to 90 percent. Biden moved from a +4 point to a +18 point lead with white millennials.

Biden has huge margins now across the Rising American Electorate, especially women. This is a very happy chapter for Biden’s performance with Hispanics (margin up from +19 to +32 points), white unmarried women (ahead by 19 points), white college women (margin up from +21 to +28 points), and white millennial women (up from +12 to +38 point lead).  Biden has a huge margin with blacks, but among black men, Trump has double digit support.

Trump has lost his working class hold – both men and women.  Few noticed how much Trump lost working class voters in the mid-terms (margin down 13 points with women and 14 with men). But Trump has lost further ground in this cycle – 6 with the women and 4 with the men. That means Biden is only losing white working class women by 8 points in the battleground. It also means Trump’s red-meat, base strategy is not moving the men where he won by 48 points in 2016.

Biden has slipped with white baby boomers and dropped sharply with the white silent generation. This is a significant drop, though obviously, more than offset by his gains with millennials —and there are a lot more of the latter. Nonetheless, it could be a reaction of older voters to the ticket and the convention; it could be Trump getting an audience on crime where Biden has only a modest advantage.

Biden does not have a strong emotional bond with voters. Biden still has a net-negative overall image, with only 28 percent “very warm” feelings for him. More voters are intensively negative.  He does not get an intense response with millennials; in fact, he does much better with older voters. He has a net -17 image with white working class women – double his vote margin.

The Republican Party is imploding. It is shedding voters and now 18 percent say, they used to identify as Republican. Biden is winning two-thirds of these voters who are very favorable about ACA.  Biden is getting 17 percent of GOP moderates and 8 percent of Catholic conservative Republicans.