So, Was Biden the Most Electable Candidate? Yup.

Once upon a time, there was quite a debate about this, including whether electability was even a real thing. Political scientist David Hopkins notes in his Honest Graft blog:

“In the young progressive circles that are disproportionately well-represented in the online world, it was common either to reject the electability logic altogether or to claim that it actually favored candidates on the left. The science reporter at a well-known “explainer” website even argued that because differences in the relative potential strength of prospective nominees cannot be determined precisely in advance, the entire concept was dubious even in the abstract: “it’s subjective, not objective . . . electability ain’t no science.”

These arguments did not carry the day. Rank-and-file Democrats did think Biden was more electable and they were right to do so. Hopkins:

“From one perspective, the electability argument for Biden has been completely vindicated. Biden has opened up a bigger lead over Trump in the national popular vote than any candidate has enjoyed at this stage since Bill Clinton coasted to re-election in 1996, and he is so well-positioned in the electoral college that the battleground map has expanded into the traditional red territory of Arizona, Georgia, and even Texas. The Trump campaign has proven unable as of yet to land a damaging punch on Biden, and has even struggled to find a promising line of attack.

Biden hasn’t been as invisible a candidate as some critics claim, but his campaign activities during the pandemic have not generated much sustained attention. Because journalists do not find the very familiar Biden to be a particularly fruitful source of interesting stories, the national media has been focusing instead almost entirely on Trump, and Trump’s spiraling political problems, since the Democratic nomination wrapped up after Super Tuesday. The relative novelty of nearly every other major potential nominee—Sanders, Elizabeth Warren, Pete Buttigieg—would have attracted more coverage from the media and pulled the spotlight away from Trump much more frequently….

[E]enough evidence now exists to shed light on two claims made by some advocates of non-Biden candidates in the 2020 Democratic primaries. One is that there are so few remaining swing voters in our current age of rampant polarization that mobilization of the party base is more productive than trying to achieve a broader appeal, and the other is that a Biden nomination would not excite enough voters on the left to stimulate this necessary mobilization.

Both of these claims have already been contradicted by the polls. Biden wouldn’t have pulled into the strong lead he now holds if he weren’t drawing significant support from previous Republican voters. (According to recent surveys by the New York Times, 14 percent of battleground state residents who supported Trump in 2016 are not supporting him in 2020.) After years of media stories about Trump’s skill in stoking the passionate devotion of his own party, the last few months have forced a widespread journalistic rediscovery of the importance of swing voters and the danger of Trump’s declining popularity among this still-pivotal bloc. And while Biden himself doesn’t inspire as much personal enthusiasm among Democrats as Trump does among many Republicans, overall levels of interest in the election are equal across party lines: Democratic voters are as motivated to vote against the president as Republicans are to vote for him.”

it’s also worth noting the overwhelming support Biden is receiving from the supporters of other Democratic nomination candidates. Nate Cohn:

The unity of Democratic voters in the Times/Siena polls represents a marked change from four years ago, when a significant number of Sanders supporters never embraced Hillary Clinton’s candidacy. According to the Cooperative Congressional Election Study, she won just 74 percent of voters who backed Mr. Sanders in the 2016 primary, while 12 percent voted for Mr. Trump.”

I know some–many–are reluctant to admit it but Biden is turning out to be a truly excellent candidate for the current moment and his opponent. He is uniting the widest possible coalition and efficiently turning Trump disapproval into the cold, hard currency of Democratic votes. It’s a beautiful thing.

That’s why the conservative Cook Political Report ratings now have Biden with a majority of the electoral college solid, likely or leaning Democratic (see graphic below). That’s why Biden is:

* Cleaning up among white college voters

* Cutting Clinton’s deficit among white noncollege voters in half 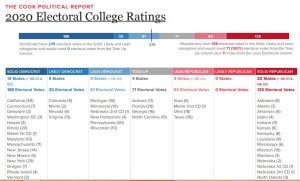 One comment on “Teixeira: Biden Unites the ‘Widest Possible Coalition’”