At The Cook Political Report, David Wasserman reports that “20 Races Move Towards Democrats,” and notes:

We may be approaching the point at which dozens of House Republicans will need to decide whether to cut the president loose and run on a “check and balance” message, offering voters insurance against congressional Democrats moving too far left under a potential Biden administration.

Trump now trails Joe Biden by nine points in the FiveThirtyEight average, roughly matching Democrats’ average lead on the generic congressional ballot and seven points larger than his 2016 popular vote deficit. But because there are plenty of solidly blue urban districts where Trump didn’t have much room to fall in the first place, his decline is especially acute in swing suburban districts with lots of college graduates.

Republicans began the cycle hoping to pick up 18 seats to win the majority back. Now they’re just trying to avoid a repeat of 2008, when they not only lost the presidency but got swamped by Democrats’ money and lost even more House seats after losing 30 seats and control two years earlier. For the first time this cycle, Democrats have at least as good a chance at gaining House seats as Republicans on a net basis.

Wasserman flags the following races as “reflecting movement toward Democrats”:

Wasserman proves one paragraph summaries of the trends for each race and also provides a link to summary data for “all competitive races,” with lean, toss-up or likely designations for each race.

Also check out sbd’s “Here are the Lean D House races. Find one to support at Daily Kos, which notes that “Pundit ratings and a few polls show 230 D, 21 Tossup, 184 R.” Sbd also provides short analysis for each of the districts and this map of which parties hold U.S. congressional districts: 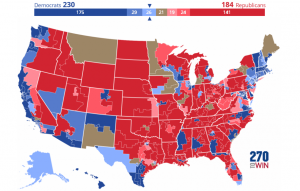 Kyle Kondik’s “The House: Democratic Murmurings in the Texas Suburbs – and Elsewhere: 11 rating changes, most in favor of Democrats” at Sabato’s Crystal Ball also merits a read. Kondik explains why “as many as 10 Republican-held House seats could become vulnerable” in Texas and why “Democrats remain favored to retain their House majority.”