It’s important to understand what public opinion is and is not saying about the protests, BLM and the police.

First, as widely understood, net favorability toward Black Lives Matter has spiked upward in the last few weeks. The public generally sees the associated protests as justified, overwhemingly condemns the killing of George Floyd and police brutality generally and is increasingly likely to see a racial bias problem in policing.

Not surprisingly, support for reforming the police and police practices is now very strong indeed, as poll after poll has shown (see graphic below for one example).

But that does not mean the public is suddenly on an anti-police vendetta and wants to defund or abolish (!) police forces. That is a view among some BLM and associated activists but it is wildly unpopular with the public (see below for a representative polling result). Even “cutting funding” for the police isn’t popular and the most anodyne formulation possible–reducing the police budget in your community to shift funding to mental health, housing and education–only garners 39 percent support vs. 60 percent opposition (Ipsos). This result no doubt reflects the fact that most people are very or somewhat satisfied with the job the policy are doing in their local community (71 percent, Monmouth).

Finally, the embrace of the Black Lives Matter by the public does not mean the embrace of what you might call the ideology of the movement, which sees the US as a white supremacist society where radical steps like defunding the police are a necessity. It reflects, rather, horror at the specific George Floyd incident and a general opposition to racism and policy brutality that is rooted in the deeply-held value that all should be treated fairly. This is shown by a recent Yougov/Economist result where people were asked about whether they had positive or negative reactions to different slogans, including Black Lives Matter and All Lives Matter. The associations with Black Lives Matter were 52 percent positive/22 percent negative. The associations with All Lives Matter were….56 percent positive/23 percent negative.

So it’s a different world out there than you find on Twitter or among activists or within elite media circles. But that world is the real one and the one where change has to take place.

I’ll give the last word to the very wise James Clyburn:

“When you allow people to use incendiary terms, we create a climate within which we can’t get much done,…‘Defund the police’ is unnecessarily confusing, I think all of us know that sound bites tend to get interpreted in all kinds of ways and if you’ve got to explain the sound bite, you’re losing the whole issue.

Nobody wants George Floyd to be remembered by a burning building — we want to remember him by reforming policing,” 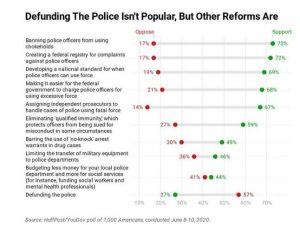 One comment on “Teixeira: Public Opinion on the Protests, Black Lives Matter and the Police”