I get it: you’re terrified the Orange One will somehow overcome all his problems and replicate his Electoral College win/popular vote loss performance of 2016. And you won’t stop being terrified until Biden gets the 270th electoral vote allocated to him on election night or next morning. I get that too.

But really….it is quite striking how big a hole Trump is currently in. Yes, maybe he’ll somehow climb out and come roaring into the November election with the wind at this back. But right now, that’s looking like a very tough assignment, for several reasons.

“Trump’s current number ranks seventh out of the polling-era presidents through 1,202 days. What’s more telling is that there are clear historical patterns for presidents seeking a second term.

Trump’s net approval is -8.1 (that is, 43.2 approval minus 51.3 disapproval). The three recent presidents who were easily re-elected had solid positive net approval at this point: Richard Nixon at +17.7, Bill Clinton at +16.1 and Ronald Reagan at +15.3. The two most recent presidents both won somewhat narrowly; at this point, Barack Obama was at +1.7 and George W. Bush at -0.3. And then there were the two most recent losers. George H.W. Bush had fallen from a then-record approval down to -6.8. Jimmy Carter was only at -2.7, but that was probably just a quirk of the data, since he had recently been at -10 and would soon sink even further underwater.

Both Carter and the first Bush dipped lower by Election Day; the three easy winners all improved further. That suggests there’s still time for Trump to either rise to a level where he could win re-election — or to plunge low enough for former Vice President Joe Biden to win something around 400 electoral votes.

The truth is that if voters react to the current recession the way they typically do in an election year, Trump will lose, and lose badly.”

Incumbents with recessions on their watch close to the election–indeed within 2 years of the election–typically lose. And what a recession we are having; the Q2 (negative) growth projections are dire (-12 percent) and many swing state counties will be very hard hit (see graphic below from the FT). And no, better Q3 growth performance does not seem to help incumbents much.

3. The coronavirus and the handling thereof

“We’ve only seen a few elections since polling began where the incumbent was eligible to run for reelection and the economy wasn’t clearly the most important issue, but these elections tell a consistent and worrisome message for President Donald Trump. Whoever is most trusted most on the non-economic issue is likely to win the election.

Right now, voters trust former Vice President Joe Biden over Trump on the coronavirus. In a new Marist College poll, Biden is more favored among voters on handling the coronavirus by a 56% to 40% margin. An NBC News/Wall Street Journal poll from earlier in April had Biden favored by 9 points.

The advantage Biden has on leading the effort against the virus comes at the same time his swing state polling has improved. He’s up in key swing states like Florida, Michigan, Pennsylvania and Wisconsin.

Trump probably wishes he had the type of polling Franklin Roosevelt had going into the 1944 election. By a 42-point margin in a National Opinion Research Center poll, Americans thought Roosevelt was better equipped to win World War II than Republican rival Thomas Dewey. Roosevelt would go on to win an unprecedented fourth term.

Trump likely would settle for the numbers George W. Bush had ahead of his successful 2004 re-election effort. Bush was more trusted than Democrat John Kerry on the Iraq war and terrorism. The final Fox News poll, for example, found that Bush was more trusted on Iraq by 6 points. The same poll had Bush up by 12 points on who would do a better job on terrorism.

You’d have to go back 40 years to find an incumbent president who lost on the big non-economic issue of the day. In 1980, Republican Ronald Reagan was ahead of Democratic incumbent Jimmy Carter by an average of 4 points on who was best to handle the Iranian hostage crisis. Remember these pre-election polls tended to underestimate Reagan’s overall support, so the true margin on this issue was likely higher. Combined with job losses, this all proved too much for Carter to overcome.

Right now, the economy is shrinking. That Marist poll is one of the first I’ve seen where Biden led Trump on who would better handle the economy. Trump is very likely to get blown out if he loses to Biden on both the economy and the coronavirus pandemic.”

If all that seems like a lot to overcome, that’s because it is. Remember: Trump is a politician, not a magician. If Democrats play smart, tough politics, they should win this one. 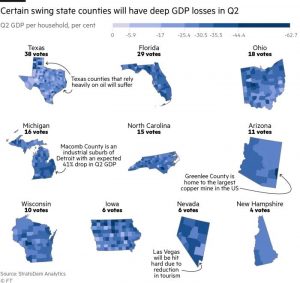