Tom Edsall has an excellent review of recent research on trends in racial liberalism/conservatism. Among several studies, he highlights one by Daniel Hopkins and Samantha Hopkins that avoids the huge methodological problem of using the standard “racial resentment” battery, which despite its name measures nothing of the sort. (I have posted previously about the problems with the racial resentment battery, if you are interested in searching my archives. And see the Riley Carney and Ryan Enos paper, “Conservatism , Just World Belief , and Racism : An Experimental Investigation of the Attitudes Measured by Modern Racism Scales”)

“Daniel Hopkins, a political scientist at the University of Pennsylvania, and Samantha Washington, a former research assistant there, challenge the argument that racial polarization in the United States is increasing. They contend that on matters of race, the views of both groups — white Democrats and white Republicans — are liberalizing.

In their paper — “The Rise of Trump, the Fall of Prejudice? Tracking White Americans’ Racial Attitudes 2008-2018 via a Panel Survey” — Hopkins and Washington use a measure of prejudice that is significantly different from the [racial resentment battery] used by [Andrew] Engelhardt.

Hopkins explained in an email why he and Engelhardt differ in their assessment of white Republicans. In his study, Engelhardt uses responses to the battery of what are known as “racial resentment” questions. Hopkins argued that these questions tend to push Republicans in a conservative direction because some directly relate to a separate issue, the role of government, including questions asking whether the government should intervene to help minorities.

According to Hopkins, some Republicans will oppose intervention on the basis of ideological “small government” principle, not racism, nonetheless raising their racial resentment score.

Hopkins and Washington write that they used a separate measure designed to capture white respondents’ beliefs in stereotypes. Speciﬁcally, our panelists were repeatedly asked to rate Blacks, Hispanics/Latinos, and Whites on two stereotype scales, work ethic and trustworthiness.

The advantage in this approach, they argue, is that the use of in-group stereotypes helps address concerns about social desirability biases, as people can rate an out-group positively while also rating their own group more positively.

As the accompanying graphic shows, Hopkins and Washington found bipartisan declines in anti-black and anti-Hispanic prejudice.”

Now, none of this means Trump can’t win….but it does indicate that continued support for Trump cannot be explained simply on the basis of racism. It is (and was originally) a far more complex political impulse than that reductionist view suggests. That should be kept in mind as Democrats seek to undercut Trump and build the broadest possible coalition for 2020.

It is even possible, as Hopkins put it in an email to Edsall:

“Overall, I do think these results indicate that the share of white Americans who would rally to a general election campaign because of its explicit appeals to racial prejudice is smaller than many political strategists suppose.” 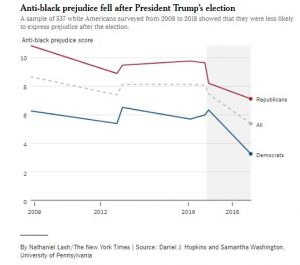 2 comments on “Teixeira: What If Racial Liberalism Is Increasing?”