Below I show the results (for the 20 most competitive states) of G. Elliott Morris’ “toy model” that integrates national and state polling with some regression analysis to give an idea of how the election is shaping up in each state in the country. 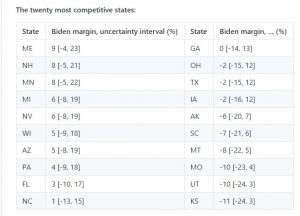 As you can see, the model implies that Trump is in deep trouble, behind in enough states to give Biden an easy win with other states like GA, OH, IA and TX either tied or very close.

Evan Scrimshaw of Decision Desk HQ reviews the latest data and sees the same kind of electoral landscape. His assessment of Trump’s troubles vis a vis Biden I largely agree with and I’ll quote it here.

“The Democrats have the upper hand across enough states to comfortably win the Electoral College, and the Midwest would be back to Obama 2012 levels of relative partisanship. For Joe Biden to be able to pull this off is a testament to his specific popularity with voters who don’t have a degree, and a sign that Hillary Clinton’s campaign was a specific turnoff for those voters who populate the legion of counties and Congressional Districts that flipped from Obama to Trump. It makes sense why that would be, too – her campaign was frequently about social issues which mattered to young progressives but not to the overwhelmingly older constituency who don’t have degrees. Biden, in contrast, is running a tight ship where he says little and doesn’t allow himself to take too many questions where troubling issues can come up. As of now, it’s working, with Quinnipiac polling this week showing Biden up 10% with seniors and 11% Nationally. For Trump, those numbers need to start reversing fast.

If Trump can’t eat into Biden’s lead with older voters and can’t stretch his non-college white lead back to Clinton levels, it’s over. Older people vote, and the suburban voters who broke for Trump in 2016 because they disliked both candidates aren’t coming back. Trump was able to squeeze out his narrow win because he got more Obama-Trump voters in exurbia than Hillary got Romney-Clinton voters in suburbia, and right now that trick isn’t repeating itself. He’s bleeding Obama-Trump voters back to Biden while the slow march of Romney voters in the suburbs continues unabated.

The President is now more than one usual polling error away from re-election, meaning he needs to do some work just to get back to the 30-70 underdog Nate Silver had him at in 2016. Even if the LeanTossup Presidential Model is aggressive in some states, namely Texas and Georgia, Trump is still in a very real mess in the upper Midwest, North Carolina, Florida, and Arizona. It’s hard to see the strategy that can flip back suburban Maricopa County, Arizona while not costing the President his huge margins in rural Wisconsin or southwest Pennsylvania. If he goes in on the culture wars, he may claw back non-degree holders with socially conservative views in some areas, but that won’t solve the problems in the suburbs of Phoenix and Atlanta. Go in on a tax cut for the well off and you give up a lot of your claim to be a different Republican who cares for real America.”