At Sabato’s Crystal Ball, Chaz Nuttycombe shares an insightful update on the battle for control of the 50 state legislatures, which is under-reported by major media. Nuttycombe, director of the election forecasting group CNalysis.com, writes:

With more than 5,000 districts at stake this year, there are many opportunities at the state level for either party to maintain or improve their advantage. We at CNalysis acknowledge the importance of these elections; we are currently casting ratings for most of these districts — 5,233 to be exact — as well as their respective state legislative chambers.

The consequences of state legislative control are enormously significant, including gerrymandering and and prospects for a broad range of social reforms at the state level, including health care, environmental protection and voting rights, to name just a few areas of critical concern. 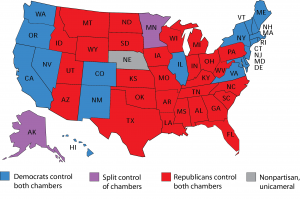 He notes further that “Overall, Republicans control 58 chambers, and Democrats control 40. Again, this tally excludes Nebraska,” while “Republicans have 20 trifectas [governors as well as majorities in both state legislative chambers], Democrats have 15, and 14 states are split. Again, Nebraska is excluded, but functionally the state could be counted as one where Republicans control both the governorship and legislature.”

But looking towards the November elections, “While Republicans hold an advantage in the number of chambers they control, the certainty of Republicans maintaining such a lopsided control of chambers is not assured…there are 11 competitive chambers remaining: nine held by Republicans, and just two held by Democrats.” Also, “Currently in the CNalysis forecast of over 5,000 single-member state legislative districts, Democrats are favored to have a net gain of 11 state Senate seats, and Republicans are favored to net 11 state House seats. Given how many seats are being contested, this would be a very modest shift in seats…only about 20% of all the districts are competitive, with the remainder either safe for one party or the other or uncontested.” In addition,

Minnesota is the greatest opportunity for Democrats to create a trifecta in state governments this year, with only the state Senate standing in their way. North Carolina and New Hampshire double as trifecta opportunities for both parties, because both states have competitive state legislative chambers and gubernatorial races. Alaska Republicans only have to flip the state House to create a trifecta in the state, though that will depend on how they fare against Republicans in the chamber who caucus with the Democrat-aligned majority coalition (more on that here).

As Nuttycombe sees Democratic goals in state legislatures for 2020:

— Keep and expand their current projected net gain in state Senate seats by mostly flipping Clinton-won suburban seats that haven’t had an election since 2016, and minimize damage in state House seats.

— Continue to gain in suburban areas they gained in in the 2018 midterms and defend their earnings mostly in those areas from that election.

It seems like a realistic and achievable agenda, one which depends upon the commitment of the Democratic state parties and their ability to educate and mobilize voters.