It should not surprise people that Trump’s approval ratings have risen some. Rally effects in times of national crisis are very common. What should surprise people is how little they’ve gone up. Since February 29, when the first US coronavirus death was reported and the first travel restrictions were announced, his aggregated approval rating on 538 has risen 2.5 points, from 43.3 to 45.8. If you date it somewhat later, closer to mid-March and the national emergency declaration, the rise is a bit over 3 points.

By historical standards, this is a very small rally effect. Presumably this reflects the fact that the overwhelming majority of Trump disapprovers are set in their judgments and perhaps a sense that some aspects of his response to the crisis have been far from optimal (as polling data suggest). Patrick Murray, director of the Monmouth Poll, does a good job of putting Trump’s “surge” in context:

“Fact 1: Donald Trump’s job rating is at an all-time high.

Fact 2: Donald Trump has not received the same approval “bump” as past presidents in a crisis.

Recent shifts in the president’s job approval have been met with “either alarms or fist pumps,” as one reporter put it to me. But we really have to keep this in context. We have become so accustomed to the fact that Trump’s numbers never move all that much, that we accept that as the norm. The current crisis is just an exceptionally stark example of that.

To put this in perspective, if this were any other president, we would expect job ratings to have swung almost instantaneously by at least 10 points. George W. Bush got a nearly 30 point bump after 9/11. John F. Kennedy saw a double-digit hike in his already high ratings during and after the Cuban Missile Crisis. Even Jimmy Carter got a 25 point bump in 1979 when Americans were taken hostage in Iran.”

It’s worth noting that all of the spikes alluded to by Murray featured the US against some other country in the world in a national security context. Despite Trump’s attempt to cast himself as a “wartime” president, it is obvious that the virus crisis has a different character–it’s a disaster, not a matter of national security.

“There’s a body of literature about the psychological need to rally around a leader in times of crisis, which is why the bigger research question for a student of public opinion is why that effect isn’t bigger right now rather than finding explanations for the few people who have become more positive toward the president.

Part of the explanation is certainly down to Trump’s inability to project a more inclusive, non-partisan persona as well as a steady hand on how his administration is tackling this situation. Part of the explanation is the failure of opposition leaders to signal to their followers that they should get behind the president (which admittedly is difficult for them to do as Trump’s rhetoric continues to lambast those who don’t show due deference to him).

Basically, the current times are blowing away a lot of the political theories about what typically happens in a time of crisis. And that, to me, is the more important public opinion story right now.”

It’s also worth noting the Trump’s small bump doesn’t seem to be having much impact on Trump-Biden trial heat measurements. The just-released Fox News Poll has Biden ahead of Trump, 49-40. This includes a shockingly low advantage for Trump among noncollege whites–a mere 13 points.

Finally, the Navigator survey has been running a tracking poll on Trump’s handling of the coronavirus crisis. They now find him underwater on this measure (down 13 margin points in a week; graphic below).

These measures all suggest the unusually modest nature of Trump’s gains in public perception. We shall see if recent measures taken (such as the CARES Act) yield larger benefits for him. But so far, the change in Trump”s approval rating is more “the dog that didn’t bark” than much of a game-changer. 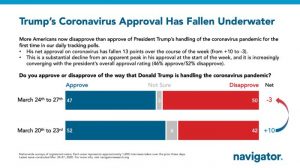