With the Iowa results (finally) in, the 538 model has flipped and now sees Sanders as the most likely candidate to garner a majority of delegates to the convention and therefore the nomination. This should make Sanders fervent supporters–and they tend to be very fervent–quite happy, even if his current advantage in this metric is fairly modest.

But let’s say Sanders does ride his current advantage to the nomination. Where would that leave the Democrats? Tom Edsall covered this topic in his Times column today and detailed both the reasons why Democrats might be optimistic and might be pessimistic. On the pessimistic side:

“Most political scientists I contacted this week saw greater disadvantages for the Democratic Party in a Sanders nomination than in the possible selection of other leading candidates.

Andrew Engelhardt, a postdoctoral researcher at Brown, wrote, that

“a Sanders nomination would be helpful for other party races to the degree he can encourage individuals who would otherwise not participate to actually turn out. It’s unclear if he helps Democrats win in more moderate districts.”

Engelhardt then noted that a January Economist survey “found that independent and Republican identifiers see Sanders as quite extreme relative to most other prospective Democratic candidates.”

Winning Republican voters is a lost cause for any Democrat, Engelhardt noted, but nominating Sanders could turn away
any who may at least consider someone like Biden or Buttigieg. Further, it may go so far as to encourage these individuals to turn out and vote against Sanders and other Democrats.

Wendy Schiller, a political scientist who is also at Brown, noted in an email that

“Sanders appears to generate the most fervent and intense enthusiasm among his supporters, but polls continue to show that Biden attracts more support among the key groups that are known to get out the door to vote in general elections, especially black voters and voters over the age of 35.”

At the moment, Schiller continued,

“the evidence today just isn’t there that Bernie Sanders at the top of the ticket can generate high enough turnout among black voters to put the Democrats in the White House 2020.”

Eitan Hersh, the Tufts political scientist, raised a different set of concerns about a Sanders nomination, primarily that he would mobilize conservatives:

“Democrats will turn out no matter who their nominee is because they are mostly motivated by their opposition to Trump. Republicans would look at a moderate like Biden or Klobuchar and think the stakes are lower than if the candidate is Sanders or Warren. So they might stay home more.”

How would a Sanders nomination influence the outcome of races for Senate, House and local offices?

“but if you want my best guess, it’s that the logic does apply: Democrats should be concerned about heightened counter-mobilization that limits their chances up and down the ballot if they nominate a more ideologically extreme candidate like Sanders.”

Now it may be that the country is ready to elect as president a 78-year-old angry democratic socialist calling for revolution. But if I were a partisan whose top priority was to bring the Trump presidency to an end, I would not bank on it.”

I would add to these observations, the data on key suburban community types recently released by Dante Chinni’s American Communities Project (ACP).

“This year, the ACP is partnering with Dynata, the world’s largest first-party survey insights company, to conduct monthly surveys to measure how each of the 15 community types is reacting to politics in 2020. Now that Dynata has completed its initial December survey, the ACP examines how each of the four big Democratic potentials — Joe Biden, Pete Buttigieg, Bernie Sanders, and Elizabeth Warren — does in a head-to-head matchup against Trump in the Exurbs (1159 responses) and Middle Suburbs (569 responses).

The early results are good for Biden, less so for Sanders….

The Exurbs and Middle Suburbs are more than bellwether communities. Together they represent the pull and push of Trump and his unique brand of politics. The Exurbs underperformed for Trump, giving him less support than other recent GOP nominees. On the other end, the Middle Suburbs surged for the president. (Furthermore, the groups hold lots of voters in the states that were very close and that won Trump the White House: Michigan, Pennsylvania and Wisconsin.)…

Among the big four Democratic frontrunners, Joe Biden’s numbers are the strongest with voters in both community types. In the Exurbs, Trump’s eight-point victory margin would be a Republican low for this century and big red flag for his campaign.

And a one-point win for Trump in the Middle Suburbs would likely mean a big defeat overall. It’s the kind of number that suggests Democrats would win back Michigan, Pennsylvania, and Wisconsin. Overall, Biden beats Trump by about six points in the national popular vote….

The numbers are less impressive for Sanders. Trump runs up a big 15-point win the Exurbs. That’s not a huge surprise. Exurban voters probably don’t see a lot to like about the idea of a “Democratic Socialist” as president. They have money in their bank accounts and in the stock market.”

Yep. Be careful what you wish for. The stakes will be pretty high this November. 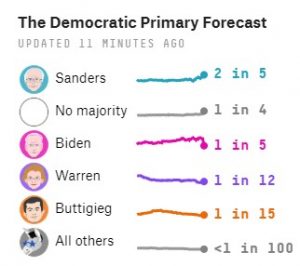