Fracking and the use of natural gas is a contentious policy issue upon which people vigorously disagree. I personally am a dove on the issue, favoring tighter regulation but believe it will serve–is serving–as a bridge away from the dirtiest energy–coal–toward completely clean sources like wind, solar and (yes) nukes. But I get the other side of this and see much room for debate.

What shouldn’t be particularly debatable is that the politics of a fracking band would likely be very bad for the Democrats in the 2020 election. This problem is explored in some detail in a NY Times article on Pennsylvania by Lisa Friedman and Shane Goldmacher.

“Though they are both Democrats, John Fetterman, Pennsylvania’s lieutenant governor, and Bill Peduto, this city’s mayor, have their differences on the environment….

But they agree on one thing: a pledge to ban all hydraulic fracturing, better known as fracking, could jeopardize any presidential candidate’s chances of winning this most critical of battleground states — and thus the presidency itself. So as Senators Bernie Sanders and Elizabeth Warren woo young environmental voters with a national fracking ban, these two Democrats are uneasy….

Mr. Peduto said “the Warren-Sanders, ban-all-fracking-right-now” position would “absolutely devastate communities throughout the Rust Belt” and pit environmentalists against workers at a time when Democrats need both.

“If a candidate comes into this state and tries to sell that policy, they’re going to have a hard time winning,” he said….

“It goes to the heart of the debate that we’re seeing within the Democratic Party right now, which is the appetite among progressives and the left for an agenda that remains unpalatable to swing voters in the states that determine the Electoral College,” said Amy Walter, national editor of the Cook Political Report.

A November poll conducted by the Kaiser Family Foundation and the Cook Political Report found that only 39 percent of Pennsylvania swing voters saw a fracking ban as a good idea, even as nearly 7 in 10 of those same voters said they supported the idea of a “Green New Deal” for the environment.”

Data in the poll also show that the idea is unpopular with the overall electorate in the state: just 22 percent support it and 53 percent are opposed. These figures, according to the poll, are essentially identical in Michigan and Wisconsin.

So a fracking ban, as advocated by Sanders and Warren, is clearly a loser in what are arguably the three most important states for the Democrats in the 2020 election. (Biden, as usual on these kinds of left litmus test issues, has a different and more sensible position: tighter regulations, a ban on new oil and gas drilling leases on federal lands, and a transition away from natural gas over time.)

So it may come down to a fracking ban vs. beating Trump. This should be an easy choice to make. 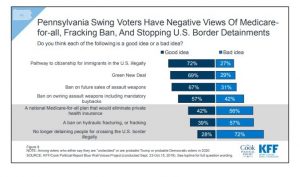 2 comments on “Teixeira: Want to Lose the 2020 Election? Advocate a Universal Ban on Fracking”