States of Change data featured in the Wall Street Journal in an excellent article on Trump’s demographic challenge by Aaron Zitner and Dante Chinni. Nice graphic (see below)

“President Trump’s 2020 election strategy relies largely on the white, working-class base that he excited in 2016. But he faces a demographic challenge: The electorate has changed since he was last on the ballot in ways likely to benefit Democrats.

Working-class, white voters are projected to decline by 2.3 percentage points nationally as a share of eligible voters, compared with the last election, because they are older and therefore dying at a faster rate than are Democratic groups. As those voters pass on, they are most likely to be replaced by those from minority groups or young, white voters with college degrees—groups that lean Democratic.

That means Mr. Trump will have to coax more votes from a shrinking base—or else find more votes in other parts of the electorate.

“Trump has a certain hill to climb, and this suggests that the hill gets a little steeper,’’ said Ruy Teixeira, a demographer with the States of Change project, which provided assessments of the 2020 electorate….

Projections by Mr. Teixeira and his colleagues find that the declining presence of working-class whites as eligible voters, if considered in isolation from other factors, would be enough to tip Michigan and Pennsylvania from narrow Trump wins into narrow Democratic wins, while producing the barest of margins in favor of Democrats in Wisconsin. Mr. Trump won each state by less than 1 percentage point, or a combined 77,000 votes.

Projected changes in the eligible electorate, holding other factors the same as in the last election, also narrow Mr. Trump’s winning 2016 margin in three swing states in the Sunbelt analyzed by States of Change: Arizona, Florida and North Carolina.

“Demographic change is making all six of these states closer,’’ Mr. Teixeira said.

If he were to rely on working-class, white voters to make up the ground he loses to demographic change, Mr. Trump would need to raise turnout among that group by 3 percentage points in Pennsylvania and Michigan and one point in Wisconsin, a Wall Street Journal analysis of the States of Change projections finds.” 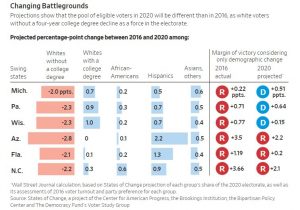 One comment on “Teixeira: Trump’s Hill Gets a Little Steeper in 2020”