I don’t suppose I’ve succeeded in getting many of you to actually read the Grimmer and Marble paper I linked to the other day. That’s too bad because it really is a very important paper. The paper is basically an accounting exercise–and I love accounting exercises!–which establishes very cleanly and clearly, using straightforward mathematics that is not really arguable, that “racial resentment” (itself a vexed term–see the famous Ryan Enos/Riley Carney paper) and similar attitudes simply cannot explain where Trump got the votes to be elected. And if that theory–to this day, the dominant theory in political science and general discourse–cannot explain where Trump got the votes, then what good is it since it doesn’t, you know, explain anything.

“An extraordinary new paper by Justin Grimmer and William Marble at Stanford has totally and irretrievably debunked the racial resentment thesis that traced the catastrophe of 2016 to white racial prejudice. But the paper, “Who Put Trump in the White House? Explaining the Contribution of Voting Blocs to Trump’s Victory,” does much more than that. It explains why the vast bulk of the literature that has emerged got it so very wrong. And it does so by mathematically demonstrating the limitations and biases of previous analyses in a straightforward manner that is a model of simplicity and elegance. This is easily the most significant work to appear on the question. In many ways, it is as much a theoretical intervention as an argument over 2016; one that has all the hallmarks of a seminal work — that creates a before and after. And it has the potential to irrevocably change the conversation in both academic political science and sophisticated political consulting. So what have Grimmer and Marble shown?

They begin by noting that, in order to understand 2016, or any other election, it is not enough to show that voters with such and such attribute (denoted by x, eg racial resentment) voted for this candidate at higher rates. This is so because the effect may be swamped by compositional effects (ie, the share of people with that attitude in the population may have fallen) and turnout rates (ie, the people with that attitude may have turned out at lower rates). In order to understand how a candidate won, we must pay careful attention to all three factors at once: composition, turnout, and vote choice.

The problem with the vast bulk of the literature is that it pays no attention to these confounding effects and pays near-exclusive attention to the vote choice of various blocs (“authoritarians” &c). In a survey of 83 papers analyzing 2016, they found a mere 5 that had paid attention to all three. The vast majority of reported results, 94 percent, are suspect because they fail to take into account these mathematical facts. This includes the entirety of the vast literature supporting the racial resentment thesis.

Once you start adding up the correct way, the racial resentment thesis turns out to be flat out wrong.”

Read the Policy Tensor piece for charts from the paper and clear explanations of what they mean. 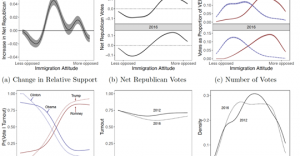