Mason Dixon has released a new Florida poll that has trial heat numbers plus broad crosstabs for Trump vs. Biden, Warren, Sanders and Buttigieg. Biden has a slim lead of 2 points, while the others lose to trump by 9, 5 and 4 points, respectively.

The internal comparisons are interesting (graphic below). Biden has Obama-level support among blacks (92-4) while Warren’s numbers look very similar to Clinton’s 2016 black support 87-8. And, while Biden leads Trump by 61-32 among Hispanics, Warren has a more modest 54-35 lead among this demographic–again, similar to Clinton’s performance in 2016. 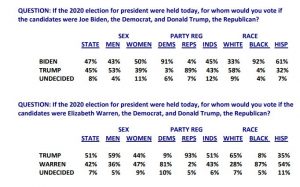