The good folks at Center for American Progress (full disclosure: I work there!), including my good buddy and co-conspirator John Halpin, have just released an enlightening poll on voter attitudes toward the economy, government and poverty. As Helaine Olen notes in the Post, the findings suggest the outlines of a winning Democratic message for 2020 (see the table below for some of those findings).

“As Democratic candidates slug it out with their primary rivals, a new report on voter attitudes toward the economy from the Center for American Progress and pollster GBAO offers guidance on what kind of message will put the eventual nominee and party in the best position for the general election.

Here’s the good news: Unity exists, even in the United States of 2019. “We see widespread support on reducing college costs, taxing the wealthy, checking corporate power and ensuring people have access to the basics,” John Halpin, a senior fellow at the Center for American Progress and one of the report’s co-authors, told me.

While the president remains divisive, the report finds majorities of Democrats, independents and Republicans agree on many things. Seventy percent or more of those surveyed, including majorities of Republicans, agreed with each of the following statements:

* “Rich families and corporations should pay a lot more in taxes than they do today, and middle-class families should pay less.”

* People who don’t receive health insurance from an employer should be allowed to buy into a public plan, and pharmaceutical companies should be “penalized” if drug prices increase faster than the rate of inflation.

* Increase “good jobs” with a $1 trillion investment in infrastructure, including both roads and “expanded production of green energy.”

* Reduce inequality with a 2 percent “wealth tax” on net worth in excess of $50 million.

That’s not all. People of every political persuasion give President Trump negative marks on his handling of health care and poverty. When asked what they believed is the most important issue that Trump and Congress should address in the coming year, “making health care more affordable” was cited by a majority of voters. Only a third of the entire electorate supported cutting Social Security, Medicare and Medicaid in an effort to address the national debt. And 8 in 10 Democrats and three-fourths of independents believe corporations have too much power and should be “strongly regulated” — something even 49 percent of Republicans also signed off on.”

This is mighty sweet music to my ears. The ideas above are a popular and plenty progressive program a Democratic candidate should be able to run on and win. Not progressive enough for you? Allow me to quote the immortal words of Nancy Pelosi: “Just win, baby”. 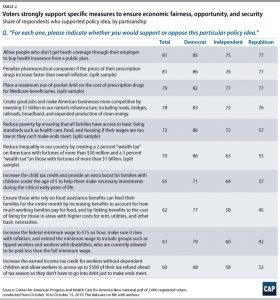 2 comments on “Teixeira: The Winning Message for 2020”