I’ve said this before and I’ll say it again. The key demographic in the 2020 election is likely to be white noncollege women. If Trump loses enough support among this group, he’s done.

More evidence for this comes from the latest Democracy Corps/Voter Participation Center survey. This phone/web survey was conducted in what they refer to as the Presidential/Senate battleground, which includes these 17 states, divided into four regions:

For those keeping score, these are the 15 states I covered in my recent report on The Path to 270 in 2020 plus New Hampshire and Maine.

Even correcting for the perhaps excessive optimism that at times creeps into the memo on the survey, the quantitative findings are impressive and don’t strike me as outliers compared to other polls. Both the memo and accompanying slide show are worth looking at but I want to focus here on the striking findings on white noncollege women.

But this poll in the presidential and Senate battleground shows both Biden and Warren running even with the white working class women (see chart below)— which would be historic, indeed, wiping out Trump’s 2016 margin of 27 points with them.

Both candidates are losing among white working class men by a stunning 32 points, but that is roughly the same as in 2018. Trump has not regained his 2016 position with the white working class men where he won by 48 points. Here, Democrats have gone from losing by more than 3- to-1 to 2-to-1. There is no evidence that Trump’s attempts to rally the base are working, at least with the men, and indeed, may be pushing the women away.”

Trust me. If this pans out, it’s big. 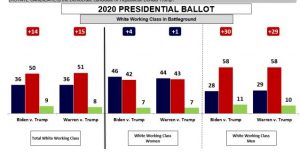