The allegation that robots are going to put huge chunks of the workforce on the unemployment line got a workout at the latest Democratic debate. As Paul Krugman noted, the Democratic candidates mostly gave terrible answers because they buy into this story about our economic trajectory–an assumption that is not remotely justified.

But if you think even that sounds bad, ask yourself the following question: When, in modern history, has something like that statement not been true?

After all, in the late 1940s America had about seven million farmers and around 12 million production workers in manufacturing. Machinery could and did take over much of the work those Americans were doing — and people at the time wondered where the new jobs would come from. If you think that concerns about automation are somehow new, bear in mind that Kurt Vonnegut’s novel “Player Piano,” envisioning a dystopian future in which machines have taken away all the jobs, was published in … 1952.

Yet the generation that followed was a golden age for American workers, who saw dramatic increases in their income, with many entering a rapidly growing middle class.

You might say that this time is different, because the pace of technological change is so much faster. But that’s not what the data say. On the contrary, worker productivity — which is how we measure the extent to which workers are being replaced by machines — has lately been growing much more slowly than in the past; it rose less than half as much from 2007 to 2018 as it did over the previous 11 years.” (See chart below)

So whose game are we playing when we buy into this robots-will-take-all-our-jobs hysteria? Krugman has an answer and I believe he is correct.

“So what’s with the fixation on automation? It may be inevitable that many tech guys like Yang believe that what they and their friends are doing is epochal, unprecedented and changes everything, even if history begs to differ. But more broadly, as I’ve argued in the past, for a significant part of the political and media establishment, robot-talk — i.e., technological determinism — is in effect a diversionary tactic.

That is, blaming robots for our problems is both an easy way to sound trendy and forward-looking (hence Biden talking about the fourth industrial revolution) and an excuse for not supporting policies that would address the real causes of weak growth and soaring inequality.

So harping on the dangers of automation, while it may sound tough-minded, is in practice a sort of escapist fantasy for centrists who don’t want to confront truly hard questions.”

Amen. What Democrats should be talking about instead of promoting scare stories about robots is something quite different–an actual program for promoting faster economic growth, which we are not getting and which we desperately need. Matt Yglesias:

“The simple fact of the matter is that productivity growth has been slow in recent years, in both the United States and other advanced countries. If the pace of automation were speeding up, you’d expect to see the opposite — output per hour worked would soar in response to the deployment of all the new technology.

And not only has growth productivity been slow, it keeps turning out to be slower than previous forecasts had expected — forcing the Congressional Budget Office to continually reduce its forecasts.

Seen through this lens, the striking thing about automation in the contemporary United States is how little of it there is…..

The result is slow growth in the overall economy which contributes to slower growth in wages and incomes. But though candidates certainly touched on points that are related to these issues, nobody directly mentioned the growth slowdown, much less propose solutions to it…..

35 years later, we know that the post-Reagan high-inequality era has not, in fact, generated sustainably faster growth than what we saw before. The economy has become more unequal, but growth has slowed. And it’s that slowdown in growth that makes the runup in inequality so unforgivable. If the rising tide was genuinely lifting all boats, people probably wouldn’t care so much about what the top one percent is up to. But the promised growth never arrived, and people are legitimately mad about it.

The lack of growth is a huge problem and it deserves serious solutions — including many of the kinds of specific things Democrats discussed relating to anti-trust law, labor unions, and investing in children — but to start you need to acknowledge the problem exists. And that means not dazzling people with fake stories of a robot revolution.” 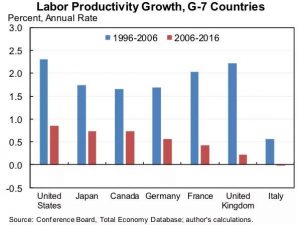