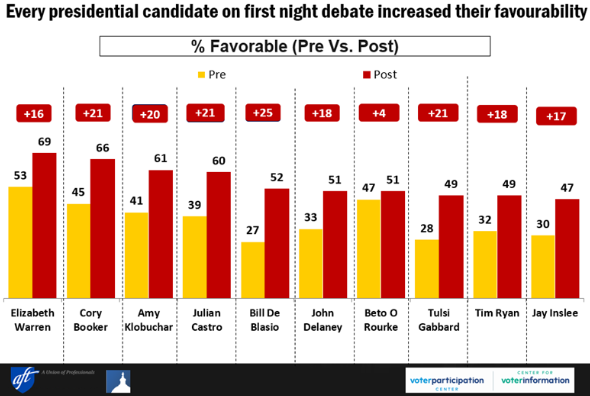 The first night Democratic Debate had a big audience and raised the favorability of all 10 participants. It was strongest for Elizabeth Warren, but also grew significantly for Corey Booker, Julian Castro, and Amy Klobuchar, raising for four all four candidates to at or above 60% favorability. The first debate also raised interesting dynamics for Vice President Joe Biden.

Voters thought Warren won the debate (44 percent), followed by Booker (18 percent) and Castro (9 percent). Booker grew his vote share more, up to 10 percent, but it came mostly among African Americans and at the expense of Biden. Castro grew his vote share among Latinos, also at the expense of Biden. So, minority candidates could erode Biden’s base. But critically, Biden gained with white working class women even though he was not on the stage. His working class appeal may come into play among this demographic.

We asked the panel participants which candidates would they consider after their initial vote. Again, we see the victors:

This was a debate where voters said their most important issues were health care and drug costs, climate change, and getting immigration under control.

Democrats showed a lot of strength with the Rising American Electorate, African Americans and Hispanics, and particularly unmarried women. It is making in-roads into white working class women too.

One comment on “Democracy Corps: All Candidates Gained Favorability”