Some excerpts from three Working America e-blasts by executive director Matt Morrison, following up to his New York Times op-ed, “The Best Way for Democrats to Win Working-Class Voters“:

Our view of what’s working

In addition to what messages work with voters, we want to use our experience and analytics to share what’s proving to be most effective this cycle.

The Persuadable Voter: With such a volatile, yet seemingly polarized electorate, identifying the best voters to move from being undecided or opposed to supporting our candidates is essential, but difficult. One way we are solving this problem is by using our store of dozens of clinical persuasion experiments from the last eight years to identify the type of voter who is consistently responsive to canvass contact. This meta-analysis tells us that from Tacoma to Greensboro, and places in between, certain types of voters will consistently be persuadable.

While some of the attributes of this group are unsurprising —no college degree, younger, etc. — it is determining how these demographic and behavioral traits combine that makes the targeting more efficient. Per calculations by the Analyst Institute, this approach can increase our targeting efficiency by 80 percent.

To put these lessons into practice, Working America ran additional experiments earlier this cycle to validate that the model works in different environments (a Midwestern gubernatorial race and a coastal U.S. House contest). We are finding success among both expected and unexpected targets. Segments of our best persuasion targets this year include:

Our Mobilization Targets: Similar to the meta-analysis of our persuasion experiments, we have combined the statistical power of dozens of turnout experiments to model which voters are most likely to increase their voter participation rates.

Much of the existing of meta-analysis, such as Gerber and Green’s authoritative book Get Out the Vote, points us to target lower-propensity voters (i.e. those with a 30%-50% likelihood to vote). That guidance is especially useful when the election context allows us to focus on these low-propensity voters, accepting that a large share will not vote even after being contacted.

What our new meta-analysis shows us is that there may be opportunities for increased turnout where we haven’t been looking, including among important segments of high-propensity voters (65%-80% vote likelihood). We have found this group can be mobilized as efficiently as lower-propensity voters — meaning we can achieve a similar proportion of vote gain, while spending less time and fewer resources in September and October trying to convince harder-to-reach low-propensity voters to turn out, and more time on the best bets. Examples of these types of voters include:

Importantly, mode of voting matters both in the short term and long term. During our work in 2014 in states with big vote-by-mail and early vote electorates, not only did we see increased turnout gains that cycle, but most of that increased turnout impact remained intact during the 2016 election two years later. As we think about 2018 as an opportunity to win more votes now, we are also looking at it from the perspective of how we realize the vote gain in 2020.

Consistent Engagement: The refrain every election cycle is that we must engage voters year-round, not just the last few months before an election. Yet, quantifying the value of that sustained engagement has proven difficult, leaving many to allocate resources and program to the same narrow window.

Our research shows that sustained organizing and engagement — whether done at the doors or through digital channels, or whether the target is persuasion or mobilization — consistently results in measurable vote gain effects 3-5X larger than late contact alone.

Many of the communities where political engagement has the most potential to increase — those with more voters who are people of color, young and low-income — simply do not receive this type of investment. Yet, our research finds time and again that shifting resources to contact these voters early and again during the last few months of an election is not only cost-neutral, but in most cases, significantly decreases the cost per vote.

Highlights from the field:

I. We Are Growing: 11 states, dozens of campaigns and growing

II. “Minting” Progressive Voters: How we are using analytics to realign the politics of millions of members

III. The Digital Difference: Our high impact Door to Digital GOTV program is coming this Fall.

I. We are growing. As of this writing, we are running voter contact programs out of a dozen offices across ten states (FL, CT, PA, OH, MI, IL, IA, MN, NM, ND, and CA), and adding more locations each week. By the end of the election cycle, we will have visited over 2.2 million voters and reached 650,000 through face to face conversations in dozens of important races. Some of our most exciting work is in races like PA-17, where Conor Lamb will defend the only House special election victory for Democrats since the Trump election. Another example is in Tallahassee and in Jacksonville, where we are fighting for Andrew Gillum, who would be the first African American governor in Florida history.

Despite the national political environment, most voters are focused on what’s closest to home—affordable healthcare, arguably the top issue this cycle. One story from the Minnesota gubernatorial contest:

One couple who identified as health care voters told us they were voting for conservative GOP nominee Jeff Johnson this election because they are conservative. The went on to say “honestly, we haven’t spent too much time thinking about it yet because our son is in the hospital.” They shared that they were having a rough time because they’re worried about their son’s hospital bills and how to pay for them when he got better, all while hoping the treatments were working. The canvasser responded by saying, “You know, that’s exactly why I’m here. I’m really worried about health insurance for my family too, and that’s why I’m talking to people about Tim Walz. He is pushing for a public option. No one should lose their house for hospital bills.” The couple agreed and promised to reconsider their vote.

Indeed, when we look at elections across the country, those who are worried about health care back our endorsed candidates by a 25 percentage point margin, even when controlling for the partisan lean of voters.

II. “Minting” Progressive Voters. You may recall seeing our growing body of clinical research showing the multiplier effect on voter behavior derived from being a Working America member. An additional insight is that the impact lasts for years.

We studied the long-term effect of increasing voter turnout in 2014 elections in Iowa and Washington. In 2014, we added 4 votes for every 100 conversations. In a confirmation that voting can be habit forming, 2 of the 4 extra votes turned out in the 2016 contests.

This type of evidence points to the importance of early organizing in shaping long-term voter behavior. In a measurable way, Working America is literally building up a bulwark of votes with every conversation we have right now that will make the difference in the 2020 presidential race.

III. The Working America Digital Difference in 100s of Elections. Digital communications allow us to reach exponentially more voters. Our approach starts by establishing a relationship at the door and is amplified through digital channels. This layered communications combination shows remarkable potential to gain more votes at 1/8th the costs of a typical peer-to-peer text messaging program. We will be sending out a list of races around the country where our digital GOTV program aimed at our 3 million Working America members will add thousands of votes for our candidates.

What It All Means. We are building a set of tools that will win more elections. More importantly, they can be used to change how working people approach political AND economic choices for the long haul. These tools are our building blocks for large-scale engagement to make the economy fairer for working people.

As part of our political program this year, we have revisited a number of Trump voters we canvassed in 2016. In January of that year, we sounded the alarm about Trump’s appeal to Ohio and Pennsylvania swing voters at a time when he was still widely dismissed. We saw that, among Republican voters, Trump had more support than all other GOP candidates combined. But what proved even more consequential were the 1 in 4 Democrats who planned to vote for him.

Here is what we have learned from these recent conversations in central Ohio and southwest Pennsylvania:

It seems that this is about more than just a partisan shift. From our vantage point, these voters reflect the great volatility of American politics over the last decade. These swing voters are people who do not relate to either party, but are yearning for something to change.

To get a sense of what we mean, watch for yourself: 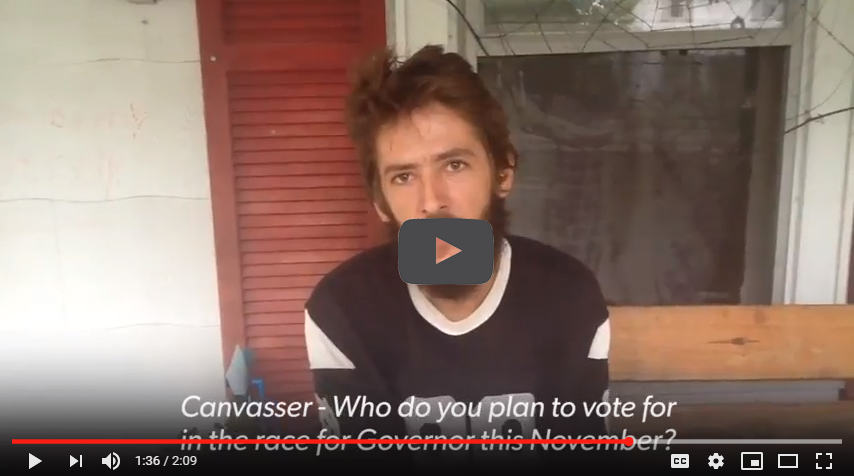 To see the data on these responses, click here.

So what does it all mean?

The progressive challenge is not just how we win 2018, but how we establish a home for voters who are adrift that stabilizes politics for an economically progressive governing majority.