For those wondering how Democrats should respond to the wave of terrorist bombing attempts against Democrats, progressives and media, the title of William Saletan’s slate.com article, “Trump Is Celebrating Violence and Nationalism at His Rallies: Republicans aren’t pushing back” puts the terrorist attacks in perspective. Saletan elaborates: “Trump has been testing the GOP’s tolerance for demagoguery that explicitly promotes brutality. And so far, Republicans seem willing to go along. Trump has repeatedly invited his supporters to beat up protesters at his rallies…To build support for political violence, you need potential adversaries within your party to clam up or look the other way. Trump is getting that from the GOP. CNBC says it asked Republican lawmakers, “including every Republican senator,” for reactions to the president’s comments. The network got no replies.”

Yochai Benkler’s “The Russians didn’t swing the 2016 election to Trump. But Fox News might have” at The Washington Post merits a thoughtful read by those who are charged with developing media strategy for Democratic candidates. Among Benkler’s insights: “the fundamental driver of disinformation in American politics of the past three years has not been Russia, but Fox News and the insular right-wing media ecosystem it anchors. All the Russians did was jump on the right-wing propaganda bandwagon: Their efforts were small in scope, relative to homegrown media efforts. And what propaganda victories the Russians achieved occurred only when the right-wing media machine picked up stories and, often, embellished them…For a new book, “Network Propaganda,” Robert Faris, Hal Roberts and I — colleagues at Harvard’s Berkman Klein Center for Internet and Society — analyzed millions of articles: any story, on any website, mainstream and fringe, that mentioned any candidate for the election and the major parties, from 2015 to 2018…Throughout our work, we find clear patterns, before and after the election. The Russians are there. They are trying. But in all these cases, American right-wing media did the heavy lifting to originate and propagate disinformation.”

In his syndicated column, “Republicans are scared of Stacey Abrams. They should be,” E. J. Dionne, Jr. writes, “By engaging in voter suppression, Stacey Abrams’s opponents are paying her the highest possible compliment…The former Democratic minority leader of the state House of Representatives, Yale Law School grad and the first African American woman to be nominated by a major party for governor is so close to winning that Republicans seem to think the only way to stop her is to keep thousands from casting ballots…Abrams’s identity would make her election historic. But her campaign also matters because she represents the growing strength of a pragmatic style of progressivism that could transform the politics of states long cast as conservative bastions.” A good point — the Abrams campaign’s impressive ability to make a close race of it in a red state, where others have failed merits study by Democrats.

Nate Cohn’s “Many Possible Paths to a House Majority for Democrats, None Guaranteed” at The Upshot provides a field guide typology to possible House swing districts: Cohn’s taxonomy  includes: “The First 13” — the most lkely Democratic pick-ups; “Well-Educated Republican Suburbs”; “Diverse Democratic Districts” — districts with pro-Democratic demographic profiles; “Mostly White, Middle-Class Districts”; “White Working-Class Trump Surge Districts” — basically Obama to Trump blue collar districts; “Democratic Stars, Republican Problems” –disticts where Dems have unusually strong candidates and/or Republicans are divided; “Republican-Leaning Gerrymanders” — districts that still have some pro-Democratic precincts, despite having lots of GOP supporters dumped in by redistricting; “A Stealthy Open Seat” — Republican-leaning districts that have no GOP incumbent; and “A Democratic Surprise” — a significant number of districts where there are no good polls to indicate trends toward either party.

“In the Senate,” Nathaniel Rakich writes at FiveThirtyEight, “our 80-percent confidence interval spans everything from Democrats picking up two seats to Republicans picking up three. And in the House, there’s an 80 percent chance that Democratic gains will be somewhere between 20 and 61 seats — that’s a big range!…What fuels this wide range of outcomes? A big part of it is lack of data. Even at this late stage in the election cycle, many states and districts — even potentially decisive ones — have seen little to no polling, which forces our model to lean on other factors like an area’s fundamentals, possibly missing sentiments stirring on the ground. Of course, we don’t need polls everywhere; many states and districts are safe for one party or the other. But if we just look at places that our model considers to be competitive, some get all the polling love, while several others are woefully under-surveyed…Overall, it appears that pollsters may be behind the curve on which districts are truly competitive given Democrats’ increasingly strong position in the House.”

Democratic strategist Joe Trippi has some comments about the effects of Trump fatigue on voters in the closing weeks. As reported by Tara Golshan at vox.com, “Trump’s creating energy among the Democratic base that wants to come out and wants to make the change and wants to do something to fight back against what’s happening. At the same time, he’s creating enough chaos and divisiveness and hostility that Republicans who would never ordinarily vote for a Democrat say, “Okay, well I’ve got all the chaos and hostility I can handle right now. I’ll vote for somebody who wants to try to find common ground and get things done for me, even if they’re a Democrat.” Golshan also quotes an anonomous “Democratic campaign aide,” who observed “People are over the drama…They are tired of the fighting. They want us to talk about the issue and the issue is not the border wall — their issue is whether their kid is going to get off of opioids.”

At The Washington Monthly, Megan Hart reports on “The Senate race That Climate Change Could Tip,” and offers insights about the largest swing state’s demographic dynamics, “Voter interest in environmental issues is exceptionally high this year, according to Jonathan Webber, the deputy director of Florida Conservation Voters.” Hart notes Republican Governor Rick Scott’s vulnerabilities regarding environmental concerns. “Under Scott and Florida’s Republican-controlled legislature, the environment has taken big hits. Webber said his organization has heard from many Republicans who are upset with the way their party has managed the climate crisis. “There are many older Republicans who miss the days when Republicans did really good things for Florida’s environment,” he said.” Also, notes Hart, “Florida’s electorate is getting younger. An analysis by TargetSmart showed that the rate of voter registration among 18- to 29-year-old Floridians increased by 8 percent following the Parkland shooting in February. Though the Sunshine State is known for its large population of retirees, more than 50 percent of Florida’s registered voters now come from the Z, Millennial, and X generations, according to MacManus, who is considered the state’s leading political authority. “These younger generations are environmental voters much more heavily than the older ones,” she said. Should they turnout on November 6, Scott’s chances of winning will diminish.”

Igor Bobic argues that “Democrats Hope Legal Weed Will Smoke GOP at the Ballot Box: The blue wave the party seeks may be more green than you think” at HuffPo. Bobic writes, “In races at the local, state, and federal level, Democratic candidates are embracing the legalization of some form of marijuana ― if not for recreational use, then purely for medicinal purposes ― at a rate not seen in previous elections…Not surprisingly, progressives like Florida gubernatorial candidate Andrew Gillum and Texas Senate candidate Rep. Beto O’Rourke have made legalizing cannabis a major plank of their campaign platform. But more centrist-minded Democrats in Illinois, Michigan, and Pennsylvania have made similar appeals to voters…The growing influence of cannabis on the campaign trail this cycle is a reflection of change over the decades in public attitudes about its use. According to a Gallup poll released this week, 66% of Americans now support legalizing marijuana ― a new record.” 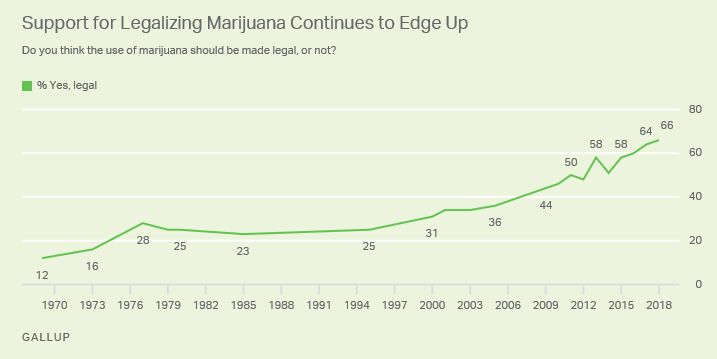