At The Hill Dean DeChiaro explores the  “Democrats Search for a Winning Campaign Strategy on Immigration” and observes,

For 18 months, Democrats have blocked Trump’s efforts to build a wall between the U.S. and Mexico, strip funding from so-called sanctuary cities and roll back asylum laws so he can more easily deport children and victims of domestic violence. On June 22, he tweeted that Republicans should put immigration legislation on hold until after November and focus on widening their majority in the midterms because Democrats “are just playing games.”

But Democrats say they’re protecting innocent families from the deportation “machine.” And Trump’s June 20 reversal on the family separation policy — a product of his “zero tolerance” for anyone who tries to cross the border illegally — underscores their message.

While most Democratic office-holders generally support less restictive immigration policies than do GOP eelected officials, DeChiaro notes that five Democratic Senators (Donnelly, Heidkamp, Mancin, McCaskill and Stabenow) have voted with the Republicans on key immigration measures, like Trump’s DACA overhaul and/or  ‘Sanctuary Cities,” and others feel pressure from voters in their districts and states who favor restricting immigration.

Trump and the Republicans are trying to brand Democrats as ‘open border’ advocates, which no Democratic elected officials support. They say they are concerned about lax boder security and potential terrorism. But Republicans all but admit they block Mexican and Central American immigrants because they tend to vote Democratic after becomming U.S. citizens.

For Democrats, the sweet spot image is being regarded as the reasonable party when it comes to immigration issues  — compassionate and humane about refugees seeking asylum and economic opportunity,  insuring a citizenship path for those who have been in the U.S. a long time, but also responsible about insuring safe and secure borders.

“Democrats have a shot at taking back Congress,” writes DeChiaro, “if they can find a way to play defense on public safety issues like sanctuary cities and the MS-13 gang, and offense on Dreamers and migrant rights. And if the playbook works, they believe they will have gained something even more valuable: the key to neutralizing Trump’s immigration rhetoric before the higher-stakes 2020 presidential campaign.”

Democrats also hope to tap public sympathy for the so-called Dreamers, the undocumented immigrants brought to the U.S. as children who could face deportation if Trump ends the Deferred Action for Childhood Arrivals program. Democrats are already invoking the Dreamers against a slew of House GOP incumbents in districts where Hillary Clinton performed well in 2016, and will likely do so in Senate races in Arizona, Nevada and other states with large Latino electorates.

DeChiaro presents a chart depicting the partisan leanings of more than two dozen congressional districts, where immigration issues could be pivotal: 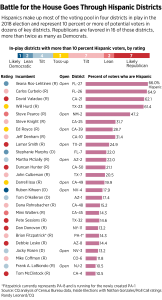 It’s not hard to envision a half-dozen or more Democratic pick-ups from this list in a good year, which so far has been the case in special elections. It’s unclear how many districts might be more in play for Republicans who are advocating a more restrictive mix of immigration policies.

Clearly, however, Democrats should take notice of Alexandria Ocasio-Cortez’s upset of Democratic Rep. Joseph Crowley in the NY- primary yesterday as an indication of rising Latino influence in congressional politics, as well as an indication that growing numbers of Democratic voters are looking for more progressive policies. There is no question that immigration reform is now a leading priority of American voters. Yet there are plenty of other issues threatening to crowd out immigration as a primary motivator on the midterm elections, including Mueller’s probe, economic instability, tariffs, corruption, gun violence etc., all of which present political minefields for both parties.

Democrats can take some comfort, however, in that they have a bumper crop of good candidates, including Latinos. And better, they have an unprecedented opportunity to look like the only reasonable alternative to a party whose leader advocates increasingly bigoted and irrational immigration policies.