The U.S. is now averaging more than one mass shooting every day, and in just just 44 days into 2018, there have been 19 school shootings. The 19-year old who bought a semi-automatic AR-15 and mowed down at least 17 students in a Parkland, FL  high school from which he was expelled provides yet another a tragic example of how easy it is for just about anyone to get weapons of mass murder, in this case, depite his threats and worrisome tips to law enforcement from students who knew him.

It’s crickets for recipients of NRA contributions, other than their usual “thoughts and prayers” response. As in so many other mass shootings, there was no “good guy with a gun,” as the NRA argues is the best solution to the problem of mass shootings. Eventually they will respond with the usual parroting of misleading statistics and other aguments of distraction, as they bide their time until the outrage melts away.

Democrats have to provide some significant leadership for gun safety because it is a national security issue, of more immediate urgency than any of our military conflicts in other nations. The lack of common sense restrictions on weapons of mass destruction is a matter of urgent national security because it is facilitating the murder of American children, not in some imagined future, but right now.

The challenge for Democrats is to keep the heat on for gun safety reform at the federal, state and local levels. Every Democratic candidate, from school board to the presidency, must become an informed, articulate champion of common-sense restriction on semi-automatic weapons, and it wouldn’t hurt for rank and file Democrats to press the case through November 6th in social media, town hall meetings and all engagements with their elected officials. We owe that much to the children who have been slaughtered by semi-automatic weapons. There is no better way to honor their lives and help their families.

To become better-informed advocates for responsible gun safety reforms, check out “America’s unique gun violence problem, explained in 17 maps and charts” by German Lopez at Vox. Lopez has done an outstanding job of producing some easy to understand, but striking graphics, which can be especially useful in social media. We’ll share one of them here, urge you to read the whole article and make good use of the graphics, as Democrats press the case for actual reforms, instead of only ‘thoughts and prayers.’ 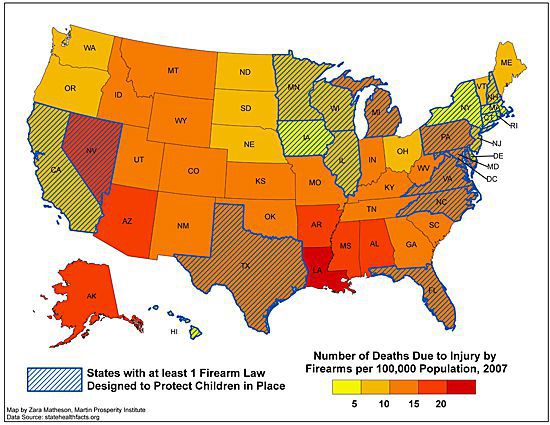 See also this NYT editorial identifying the recipients of the largest NRA contributions.