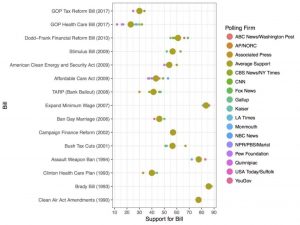 My, my what will those crazy rascals in the GOP think of next? Not content with being beaten soundly about the ears in the 2017 elections and currently running a serial child molester for Senator, the overachievers in the Republican Party and seeking to ram yet another incredibly unpopular piece of legislation through Congress in the spirit of their attempted repeal of Obamacare. John Sides of The Monkey Cage blog notes the following about the GOP’s tax reform plan:

On average, only about 30 percent of Americans support the tax plan. This is lower than support for almost any of these legislative initiatives. The only thing that was less popular was … the Republican health-care bill that was intended to replace the Affordable Care Act.

Gee, who would have thought that a bill that mostly cuts taxes for corporations and the rich while eventually raising taxes on middle income families would be unpopular?

Meanwhile, evidence continues to build that unpopularity (of their President, of the bills they have tried to pass, of the Republican Congress) will hurt the GOP big-time in 2018. Yes, I know some are reluctant to utter these words out loud, fearing that some mysterious Trump ju-ju will save the Republicans in the end. But, as Cook Political Report’s Amy Walter pointed out on her Twitter feed, the real lesson of 2016 is “Don’t ignore or rationalize away what’s right in front of you. A Dem wave is building. And it’s big”.

Yup, that’s right. What looks like it’s happening, in all probability, is really happening. So believe it and act accordingly.