The following article by James Carville and Stan Greenberg is cross-posted from Democracy Corps:

About 9 months into his presidency, Donald Trump has settled into a historically weak job ap- proval of 41 percent, well below his presidential vote, and with the strong disapproval over 45 percent of voters. He remains an unrepentant divider which pervades all political discourse.1

Yet the most hated politicians are the Republicans in Congress, and perhaps they ought to be more of the focus as they are on the ballot in 2018. Mitch McConnell is the least popular con- gressional leader in Democracy Corps’ polling, followed by Speaker Ryan. Voters know that the Republicans are in charge in Congress and these are the poster children. So why do the Democrats not enjoy a stronger lead in the ballot? 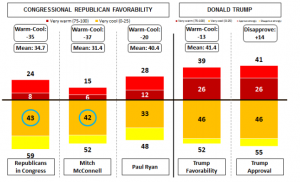 1 National phone survey of 1,000 registered voters conducted by Democracy Corps and Greenberg Research from September 30 – October 6, 2017. The survey was matched to voter file and 67 percent of respondents were reached by cell phones. Of these registered voters, 667 are “likely voters” in 2018. Greenberg Research maintains its own survey and weighting methods, independent of surveys released by GQRR.

The Democrats are ahead by just 8-points among registered voters, and 5-points among likely 2018 voters in Democracy Corps’ most recent national survey. That is marginally down from the 10-point and 7-point advantages (among registered and likely voters, respectively) Democrats held in our June polling on behalf of WVWVAF. (We will release new findings on behalf of WVWVAF next week.)

See graph at this link.

The focus should be more on the GOP Congress, but contributing is the Democratic Party brand, which is unimpressive in this poll. They are viewed more favorably by just net 4-points. There has been no growth in identification with the Democratic Party, as there was in going into 2016.

This dynamic is producing a situation where self-identified Democrats, generic Democratic voters and Hillary Clinton-supporters hold their preferences with great certainty, but they are no more likely to turnout for Democrats in the off-year election, according to this poll.

A remarkable 81 percent of Democrats strongly disapprove of Donald Trump, while just 55 per- cent of Republicans strongly approve of his job performance. Those voting for the Democrat for Congress are more certain of their choice by 62 to 38 percent, while those voting Republican are split in their certainty (52 very certain to 48 percent somewhat certain).

Yet when it comes to the measures used to gauge interest and intention to vote, Democrats and Republicans are showing equal engagement. That will not produce the landslide election Democrats are hoping to achieve.

See graph at this link.

Maybe Steve Bannon is right that stoking the flames of identify politics creates an environment where Democrats calling for big economic change don’t get heard. We saw in the polling we re- cently released with Public Citizen that Donald Trump has high approval marks when it comes to ‘keeping jobs in the US’ (+27) and ‘putting American workers before the interests of big corpo- rations’ (+7).

But two things catch our eye in this poll to suggest the election could take shape in very different ways by next year. First, watch the seniors and Baby-Boomers. With acute sensitivity to the impact of health care changes, seniors and Boomers are giving particularly high negative marks to Trump and Republicans. The Democrats even hold a 2-point lead in the generic ballot among seniors, breaking the age pattern that has shaped our recent elections.

Second, in our first poll testing a 2020 presidential contest between Donald Trump and Elizabeth Warren, the Senator wins by 12-points (54 to 42 percent). In coming polls, we will test other potential nominees, but that result is some measure of the real structure of the partisan balance.

One comment on “Carville and Greenberg: The country hates the GOP Congress: Why don’t Democrats have a knock-out lead?”