The millions of Americans who have benefitted from the Affordable Care Act (ACA) have reason to be concerned about President-elect Trump’s intentions regarding the legislation.

It’s not just Trump’s pledge to repeal the legislation and replace it with something “terrific.” Trump’s  nominee for Secretary of Health Education and Welfare Rep. Tom Price is cause for further concern. Price, as New York Times reporter Tom Hulse has noted, is “not only a leading proponent of repealing the Obama-era health care law, but he has embraced Republican efforts to move future Medicare users into private insurance programs and raise the eligibility age.”

At some point, however, Trump will have to reassess at his “mandate,” tempered though it is by Clinton’s popular vote win. More specifically, he should examine what Trump’s 62+ million voters want to do about Obamacare. The most recent Kaiser Health Tracking Poll, conducted Nov. 15-21, offers some guidance in arriving at a credible answer to what his voters want, regarding the ACA. 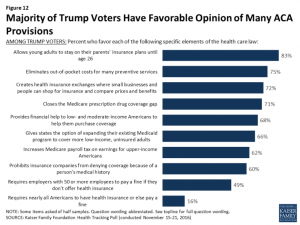 Clearly Trump voters overwhelmingly support the key provisions of Obamacare, with the very significant exception of the individual and employer mandates — even though many of them voice fervent opposition to the legislation by name. If Trump wants to respect his supporters’ wishes, he has to navigate a very difficult course.

One of the trickier questions Trump and the Republicans will face in preserving the ACA’s ban on denying coverage because of prior medical history, is whether insurance companies will be able to charge higher rates to those with a history of medical issues, and if so, how much higher. Seniors are also worried that the Trump regime may force Medicare recipients to pay more out of pocket, and middle-aged voters have reason to be concerned about raising the Medicare eligibility age.

These and other questions almost guarantee that a lot of Trump voters are going to be sorely disappointed. It will be interesting to see how that plays out in the 2018 mid-term elections.