The following article is cross-posted from a Democracy Corps e-blast (website link here):

We are entering a period too awful to contemplate, and James and I thought it important to share our first take on what happened and why. Thankfully, Women’s Voices Women’s Vote Action Fund and the Roosevelt Institute supported this election night survey and critical research on the changing electorate and the economy throughout this cycle that allows us to offer unique perspective. There are extensive findings that we are only just beginning to fully explore and will continue to release to add texture to this complicated outcome. This note focuses on why people voted the way they did and what happened across this very diverse and divided electorate.

First, we believe Hillary Clinton and Democrats could have won this election if Democratic base voters turned out at higher numbers and appealed to enough white working class voters, particularly women, to win the Rust Belt.

Second, it should not be ignored that some of the reason for Trump’s upset is malicious interference by the Russian Federation and their allies at WikiLeaks, as well as reckless politics by the F.B.I. in the post-debate period. Battling back against this media coverage forced Clinton to take her foot off the pedal. She was unable to end the campaign turning out her voters by talking about the change they were demanding.

Democracy Corps’ research for WVWVAF and Roosevelt has consistently shown the importance of putting forward a progressive economic agenda and message of change to motivate a changing electorate, reach out to persuadable voters, and consolidate the Democratic base. In our polling we found that Hillary Clinton gains her biggest leads when she is calling for an economy that works for everyone, not just the wealthy and well-connected, and puts forward bold policies to end trickle-down economics. Debate dial-meter testing for WVWVAF found voters became more enthusiastic about Clinton and viewed her more positively when she went after Trump for proposing massive tax-breaks for himself and failed to release his own tax returns. (View our debate dial meter group reporting here and here)

Instead, the campaign closed by attacking Trump and few voters remembered her bold economic plans and the change she was promising. The result was an election where the “New American Majority” did not turnout in anywhere near the numbers expected.

Meanwhile, Donald Trump was on message running on cleaning-up the political system, attacking Clinton as a tool of big business and Wall Street, and offering a reprieve from bad trade deals that cost American jobs and greater public investment. For those who voted for – or considered – Trump, his vow to repeal Obamacare and keep liberals off the Supreme Court were the most important reasons to cast their ballots. But nearly as important were his economic plans and how his business success prepared him to create jobs. 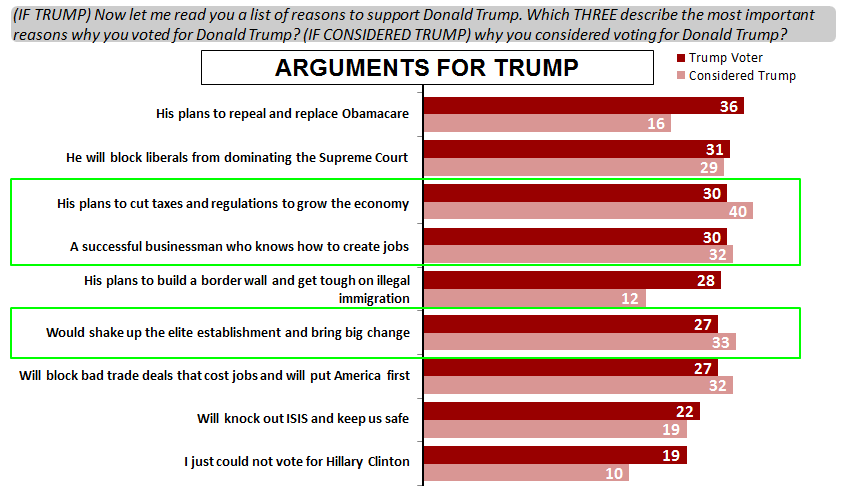 Trump’s hard-line immigration stance ranked fifth and may be an overstated factor in the outcome of the election. Even a plurality of Republicans say that “Immigrants today strengthen our country because of their hard work and talents.”

The arguments for Clinton that won her support were her experience, her temperament and suitability to serve as Commander in Chief, her capacity to govern for Americans of all backgrounds and her support for women on equal pay, the right to choose and funding Planned Parenthood. As we saw, that was her closing argument. Her plans to grow the economy by taxing the rich and investing in the middle class were overshadowed and only rank fifth in voter attention. 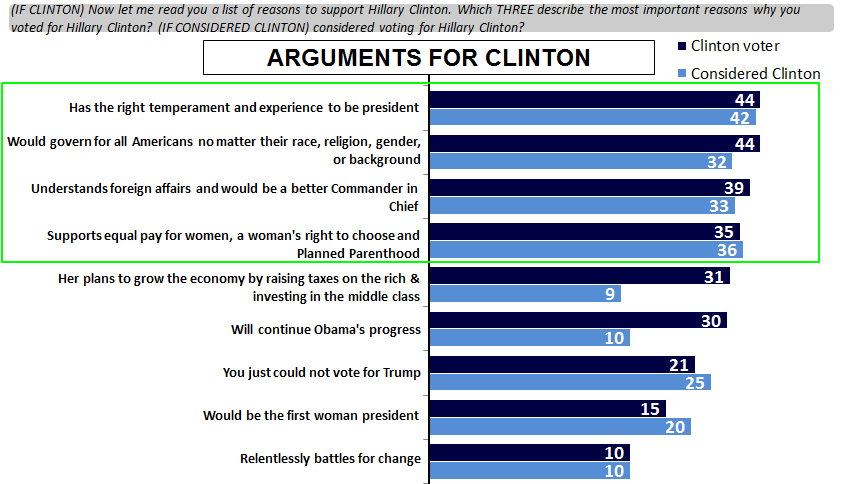 The attacks on Trump that registered among those who voted for Clinton and considered her concerned the hateful things he has said about vulnerable minority groups, his disrespect for women, and his inability to handle the nuclear codes given his thin-skin.  His plans to cut taxes on the rich, likely himself, and his refusal to release his tax returns scored even lower, and were not elevated enough to make an impression on voters.

Because the Clinton campaign ended up running on her experience, suitability to govern and openness to America’s diversity and women, but not on the economy and change, it is not surprising that the Democrats ended up best on uniting the country and reviving the middle class. Because they did not run on the economy and change, Republicans have a 6-point lead on handling the economy. And while voters questioned Trump’s capacity to serve as Commander in Chief, the GOP has a 10-point lead on keeping the country safe. 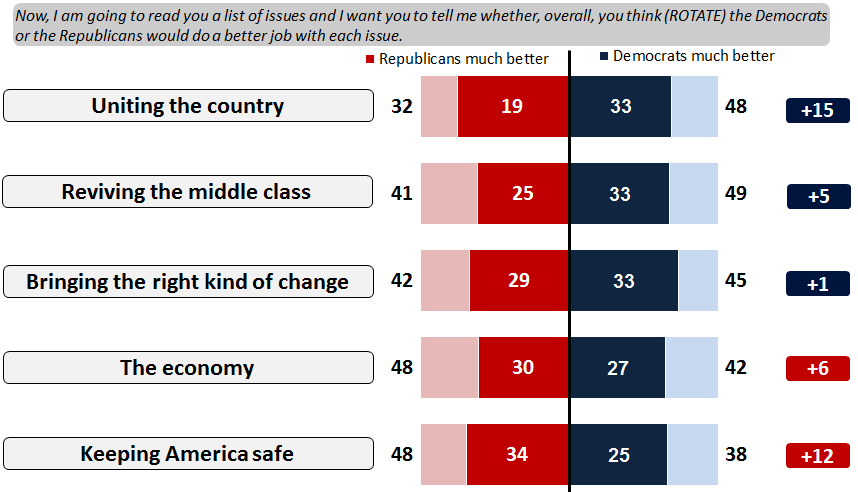 On Election Day, millennials and Hispanics – two of the groups that form the Rising American Electorate – were among the least engaged voting blocs, with obvious consequences (only 72 percent of Hispanics and 68 percent of millennials gave the highest rating of significance of this election on a 10-point scale).

Despite all that, the Rising American Electorate did become the majority of the vote for the first time. The groups of minorities, unmarried women and millennials who twice elected President Obama now formed 55 percent of voters, pushed up by the growth of millennials and Hispanics. African American voters held their share of the vote at 12 percent, while unmarried women still fell just short of being one-quarter of the voters. They helped Clinton win the popular vote. 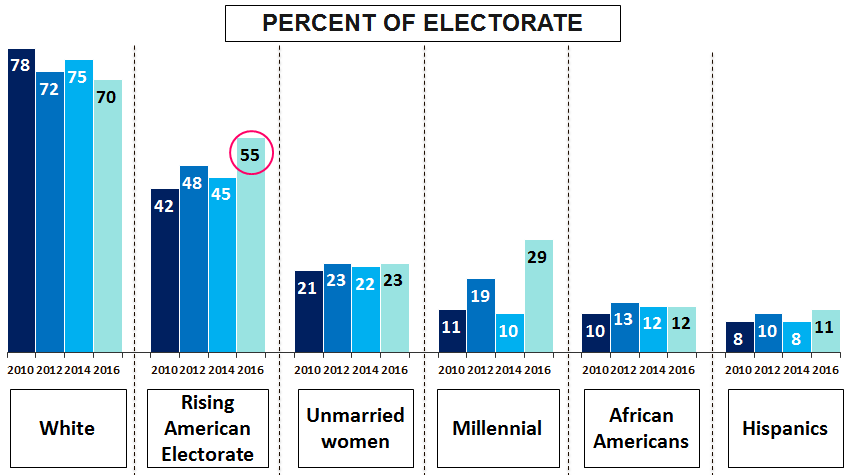 White working class voters played a big part in the very late swing to Trump, particularly in the battleground states. This came in part from further consolidation of white working class male voters and elevated turnout, particularly in the rural areas and small towns in the Rust Belt. We always had Trump performing well here: he held a 36-point lead before the conventions, and in the end, won by 49-points with 72 percent of their vote.

Just as important was the late switch of white working class women. Hillary had been competitive among white non-college women after the debates, pushing Trump’s margin to 7-points.  But the disrupted close to the campaign saw those women move dramatically away, with Trump winning by 26 points, 7-points better than Romney.

These voters thought Trump was raising legitimate working class issues, and with the Clinton campaign mobilizing its diverse base and no longer talking about change, the white working class women moved to the Republicans in many states.

Obviously, we are only beginning to understand this new moment and what it means for progressives. We look forward to sharing the rest of our findings in the coming week.

This survey took place Monday, November 7 – Wednesday November 9, 2016 among 1,300 voters or (on Monday only) those with a high stated intention of voting in 2016.  In addition to a 900 voter base sample, oversamples of 200 Rising American Electorate voters (unmarried women, minorities and millennials) and 200 battleground state voters (AZ, FL, OH, IA, NC, NV, NH, PA, VA, WI) were included. Margin of error for the full sample is +/-3.27 percentage points at the 95 percent confidence level.  Of the 1,300 respondents, 65 percent were interviewed via cell phone in order to accurately sample the American electorate.