The following article by Stan Greenberg of Democracy Corps and Page Gardner of Women’s Voices and Women Vote Action Fund is cross-posted from Democracy Corps:

Hillary Clinton won the first debate against Donald Trump and likely produced electoral shifts, according to participants in a live dial meter focus group organized by Democracy Corps and commissioned by Women’s Voices. Women Vote Action Fund. These participants, comprised of voter blocs critical to the outcome of this election, watched a Democratic candidate lay out a broad economic vision that spoke to their lives, show strength that reassured on security, speak to our nation’s racial divisions in a way that engaged voters and most of all, reassure them on trust and honesty.

Trump’s performance, with some exceptional moments, lacked the bombast of previous efforts, but did little to reassure voters about the prospect of a Trump presidency, particularly when it comes to security. Dials showed that Trump really struggled with both his tax plan and his own taxes, his contempt for women and above all, when he talked about his favorite subject: himself. The only area where he made gains was on having the right approach to trade agreements.

Clinton produced impressive gains in the vote, squeezing the third party candidates and raising intensity of support with white unmarried women and white working class voters.That alone would be a big night. But just as important, she shifted these voters’ perceptions of her as a person on such key attributes as trustworthiness, having good plans for the economy, jobs, and looking out for the middle class. There was also a huge shift in her overall favorability (+33 points).

The white working class story is almost as impressive. Their lines spiked all through the debate and their favorability towards Clinton also shifted 33 points. The 2-way vote margin shifted 16 points as the 3rd party vote got squeezed. And at the end of the debate she won her biggest gains with these working class voters on the economy, keeping America strong and having the right approach to taxes. Clinton could not have hoped for better.

Millennials also responded very positively to key parts of Clinton’s performance, though their favorability shift was not as great as other groups and Clinton lost a little ground on the vote. We will watch what happens in the real world.

Overall, this was a very good night for Hillary Clinton.

Some of the Secretary’s strongest moments, particularly among unmarried women, came at the inception of the debate when the two candidates laid out their economic vision. Clinton’s narrative of an “economy that works for everyone,” and her new criticism of Reaganomics (“Trumped up trickle down”) struck a chord with these voters, including non-college white voters who have moved away from Clinton and Democrats in recent elections. 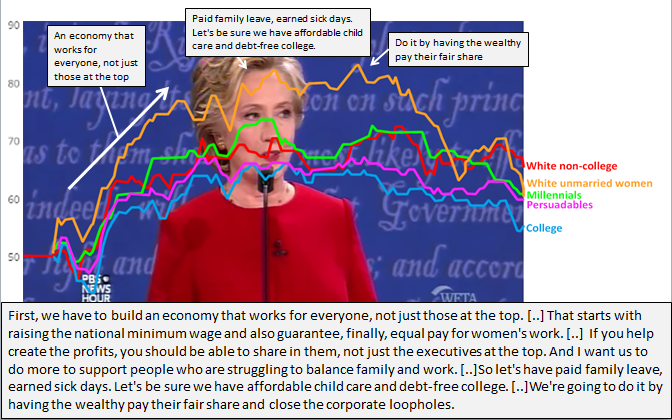 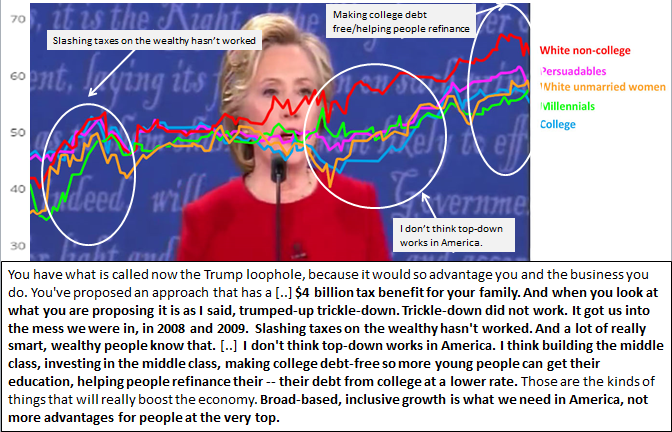 The biggest increase in Clinton’s attributes (+18 points) concerned whether she “looks out for the middle class.” In the post-debate breakout groups among those who shifted over the course of the evening, people talked about how she would help the middle class and cared about them.

Trump’s focus on trade moved the dials up sharply but not far north of 50 percent at this point. Later, his attacks on trade did get one of his strongest responses, and he was considered to have the better approach on trade at the end of the night. That did not translate, though, to any gains in whether he has good plans for the economy. 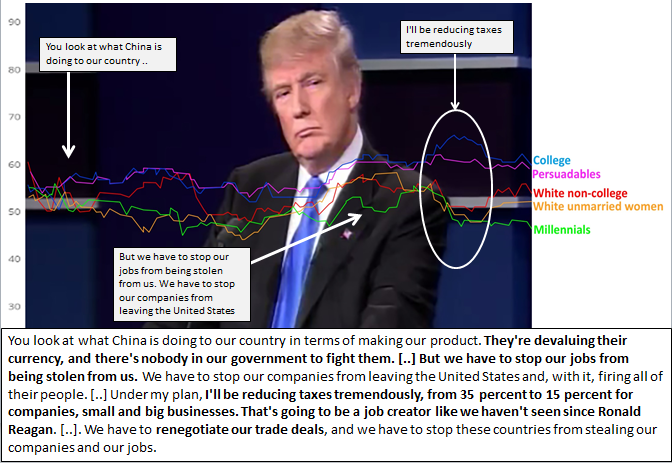 The exchanges around trickle-down economics got their strongest response from the white working class voters, and their lines soared above all others in the groups. At the end, they shifted 22 points on who has the better approach to taxes.

At the 30 minute mark, the moderator opened a dialog about Trump’s failure to release his taxes, leading to the worst moments from the Republican. When Trump crowed about the $694 million dollars he made last year, among other boasts, he quickly lost the people in our focus group. Clinton seized the opportunity to successfully highlight Trump’s history of stiffing workers and baited Trump into bragging about his business. Trump did not disappoint, further undermining his standing among participants. It reinforced the impression that he was only about making the economy work for him.

Race and crime
Trump did not commit any racial gaffes in this debate, but neither did he reassure voters.  And he needed too.  Moreover, his commitment to “Stop and Frisk” and his repeated lying about New York’s crime rate did not convince voters in a country increasingly divided over race to embrace him as a figure of national unity.  His insistence on “law and order” did not impress these voters. 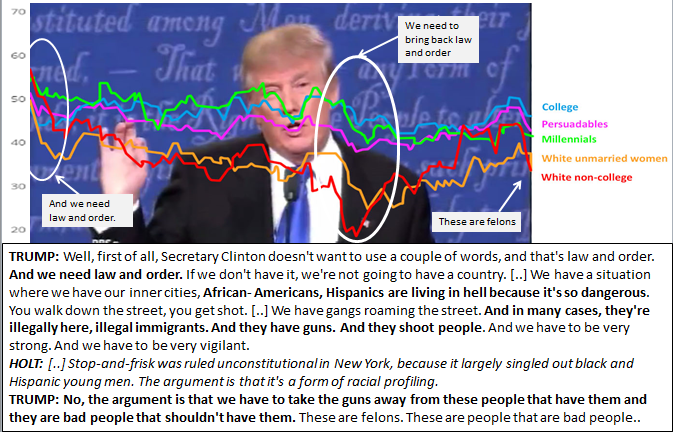 Hillary Clinton’s strongest moments among millennial voters—a group that has so far failed to embrace her candidacy with much enthusiasm came during the discussion of race and criminal justice reform.  Her strongest moment among these voters came during her condemnation of Trump’s racist “birther” attack on President Obama. 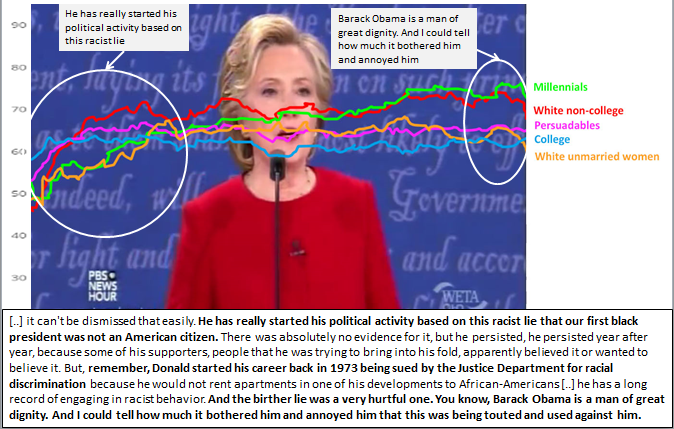 Clinton also scored points with voters of all stripes, including non-college whites, when embracing common-sense policies to reduce gun violence, producing one of the sharpest dial spikes in the evening. Trump wisely did not walk off the cliff with the gun lobby on the “no-buy, no fly” list but these voters seemed otherwise unimpressed with his NRA endorsement.

Making our country safe
Donald Trump came into this debate needing to reassure a fretful nation that he could be trusted to be Commander in Chief.   While Trump avoided comments about “loving war,” his argument that we need a “businessman” failed to convince these voters.  Participants conferred a huge 60 to 40 percent Clinton advantage over Trump before the debate on who would keep America safe and Trump was not able to do anything to chip in to her lead, with Clinton still holding a 60 to 40 percent lead after the debate.

But she also demonstrated strength throughout the debate.  Despite some cheap and poorly received “stamina” shots from Trump, a 66 percent majority of participants described Clinton as a “strong leader” at the conclusion of the groups

Two big wins and losers
Clinton accomplished some important things, most notably in terms of positive improvement on personal favorability, on trust, on being for the middle class and on the economy and jobs. That cannot help but shift the vote.

The first of the biggest wins was the consolidation of unmarried women.  It was as if Clinton had rehearsed with unmarried women as her audience.  Their dials responded as if she was speaking to them directly. This debate shifted their vote, their excitement and their intensity of support.  They are poised to help Clinton reach a victory.

The second win was the shocking response of white working class persuadable voters.  They responded as if they too were the main target.  They warmed to her dramatically, responding strongly to her on the economy, jobs and taxes. This debate may have shaken up the voters that were to give Donald Trump his path to competitiveness.

The losers are Donald Trump, for obvious reasons, but perhaps also Gary Johnson and Jill Stein. Among the 50 swing persuadable voters, the 3rd party vote and number of undecideds dropped 12 points – that is, by almost 50 percent. Among the white unmarried women, that bloc dropped 12 points and 6 points among the white working class. Obviously, the debate is an artificial environment, but it is also the way this election will look to most voters in the weeks ahead. This debate shows them too to be among the big losers.

The implications for the vote will become apparent pretty quickly, and we expect there to be an increase in Clinton’s margin.

Democracy Corps conducted online dial meter research among 100 likely voters nationally: 50 persuadable voters, 25 white unmarried women, and 25 millennials during the presidential debate. Surveys were administered before and after the live dial meter session. An online breakout focus group among those who changed their vote or become more certain of the vote was conducted after the debate. This research is qualitative in nature and involves 100 total participants.  Results are not statistically projectable onto a larger population.
____________________
Democracy Corps is an independent, non-profit organization dedicated to making the government of the United States more responsive to the American people. It was founded in 1999 by James Carville and Stanley Greenberg. Democracy Corps provides public opinion research and strategic advice to those dedicated to a more responsive Congress and Presidency. Learn more at www.democracycorps.com
Women’s Voices Women Vote Action Fund (WVWVAF) is a nonprofit, nonpartisan 501 (c)(4) organization founded in 2005 and dedicated to increasing the voting participation and issue advocacy of unmarried women. Learn more at www.wvwvaf.org.