In “Liz Cheney Already Has a 2024 Strategy. To save the Republican Party, the defeated Wyoming representative may first have to destroy it,” Ronald Brownstein writes at The Atlantic: “The magnitude of Cheney’s defeat yesterday underscores how strong Trump remains within the party, and how little chance a presidential candidacy based explicitly on repudiating him would have of capturing the nomination….Yet many of Trump’s remaining Republican critics believe that a Cheney candidacy in the 2024 GOP presidential primaries could help prevent him from capturing the next nomination—or stop him from winning the general election if he does. “Of course she doesn’t win,” Bill Kristol, the longtime strategist who has become one of Trump’s fiercest conservative critics, told me. But, he added, if Cheney “makes the point over and over again” that Trump represents a unique threat to American democracy and “forces the other candidates to come to grips” with that argument, she “could have a pretty significant effect” on Trump’s chances….In some ways, a Cheney 2024 presidential campaign would be unprecedented: There aren’t any clear examples of a candidate running a true kamikaze campaign….Kristol predicted that the party might try to exclude her by requiring any candidate participating in a RNC-sanctioned debate to commit to supporting the party’s eventual nominee in the general election—something Cheney’s determination to stop Trump would not allow her to do. (In 2016, the RNC imposed such a loyalty oath primarily out of fear that Trump wouldn’t endorse the nominee if he lost. Trump signed it but characteristically renounced it in the race’s latter stage.)….Even so, it would be difficult for any media organization that sponsors an RNC debate to agree to keep her off the stage. And if Cheney is registering reasonable support in the polls—say 5 percent or more—even state parties might think twice about barring her. “Every other candidate not named Trump is going to want Liz Cheney on the debate stage,” the GOP consultant Alex Conant, the communications director for Senator Marco Rubio’s 2016 presidential campaign, told me.” It is hard to see how Cheney’s loss will have any effect on the midterm elections. In 2024, many Democrats would rather have Trump to run against, since having him at the top of the ticket in 2020 cost his party the presidency, the House and Senate majorities already. But at this juncture, it looks like Trump’s legal troubles are a bigger threat to his candidacy than Cheney’s shrinking megaphone.

“Overall, our best guess right now is that there will not be a ton of net change in the governorships,” Kyle Kondik writes at Sabato’s Crystal Ball, regarding GOP prospects in the midterm elections. “Democrats appear very likely to flip the open seats of Maryland and Massachusetts and they have another prime open-seat target in Arizona, but Republicans may be able to make up for losses (and then some) by flipping a number of the vulnerable Democratic-held governorships we’ve noted above — with many of the best targets coming west of the eastern time zone.” Kondik adds, “Democrats continue to have the 2 clearest pickups, the open seats in Maryland and Massachusetts. However, Democrats also are defending 4 of the 5 Toss-ups.” Kondik shares this map, illustrating Crystal Ball’s current gubernatorial ratings: 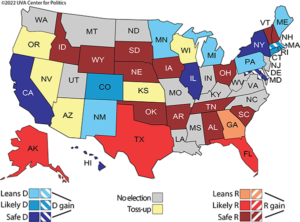 A couple of encouraging recent Polls noted at The Hill: Caroline Vakil writes, “President Biden’s approval rating ticked up 3 percentage points in the past week, according to a Politico-Morning Consult poll released on Wednesday, as Democrats scored a major legislative win with the passage of their climate, health care and tax reform package….The poll showed that 42 percent of registered voters said they approve of the job Biden is doing as president. The same poll released last weekshowed Biden’s approval rating was at 39 percent….At the same time, the number of registered voters who said they disapproved of his job performance dropped from 59 to 56 percent….More people in the latest poll also said the country was on the right track — 30 percent, compared to 25 percent last week. Seventy percent of registered voters said it was on the wrong track, compared to 75 percent the previous week.” Also at The Hill, Jared Gans reports, “Wisconsin Lt. Gov. Mandela Barnes (D) leads incumbent Sen. Ron Johnson (R) by 7 percentage points in their race for Johnson’s seat, according to a poll from Marquette University Law School released Wednesday….The survey found that Barnes received support from 51 percent of respondents, compared to Johnson’s 44 percent. Barnes expanded his lead from Marquette’s June poll, in which he led Johnson by only 2 points, within the margin of error….The poll released Wednesday shows a sharp partisan divide between the candidates, with 95 percent of Democrats supporting Barnes and 92 percent of Republicans supporting Johnson. But Barnes leads among independents, 52 percent to 38 percent. …The two candidates were tied among independents in the June poll….The conservative senator has faced sharp pushback after he said earlier this month that Social Security and Medicare should be categorized as discretionary spending, requiring Congress to approve their budgets every year instead of allowing them to rise annually….Democrats also released an ad this week targeting Johnson for his vote against implementing a $35 per month cap on out-of-pocket insulin costs for individuals with private insurance.”

Abby Vesoulis’s “The Inflation Reduction Act Was a Huge Win for Democrats. Will It Help Them In the Midterms?” at Mother Jones offers some messaging advice for Democratic campaigns: “battle. Now Democrats must convey this major legislative victory to voters as they struggle to preserve their congressional majorities in the upcoming midterm elections….There are, however, strategies Democrats could take to turn their legislative successes into electoral ones, half a dozen political strategists and experts say….The most obvious move is to start pointing out the highly popular policies that Republicans have tried to thwart, three strategists emphasize….Fully 83 percent of voters support Medicare negotiating for lower drug prices, 61 percent say Congress should do more to fight climate change, and 62 percent backraising corporate taxes. Not a single Republican voted for the IRA, which does all three….Even the 2021 bipartisan infrastructure deal hardly lived up to its billing as bipartisan. Democrats ought to point that out, says Mike Lux, a political strategist who has served senior roles on six different presidential campaigns. “Ninety percent of House Republicans voted against it. A majority of Senate Republicans voted against it,” says Lux, “Democrats need to serve up the contrast: ‘Look, we’re working to get stuff done. Republicans are trying to stop things from getting done.’”….Republicans’ vote against expanding the reconciliation bill’s insulin price-capping provision to include privately insured patients is one of the most obvious examples of GOP obstruction….More than 7 million US diabetics require daily insulin and roughly 14 percent of insulin users spend “catastrophic” levels of their income on insulin, according to a Yale study, meaning their insulin accounts for at least 40 percent of their income after deducting food and housing costs….“I think we can kill the Republicans on the insulin thing,” argues Lux.” Vesoulis continues, “Every GOP lawmaker just voted against a bill that will surely prevent some people from dying from treatable diseases, says Dr. Rob Davidson, the executive director of Committee to Protect Health Care, a group that advocates for policies that put patient care over profits….In his day job as an emergency medicine physician in rural Michigan, Davidson says he sees patients rationing medication due to financial difficulties end up in the his emergency room on a weekly basis….Lower prescription drug and insulin costs procured by the IRA will “save a certain number of people’s lives,” he says. “It’s incontrovertible. Nobody can say that’s not true.”….Whether the IRA can save Democrats’ congressional majorities is less straightforward. That will not so much depend on what Democrats got done—but if they can finally learn how to talk about it.”