So how are Democrats doing when it comes to registering voters? Rhodes Cook takes a look at party registration trends at Sabato’s Crystal Ball and writes, “Party registration can be a lagging indicator of political change, but recent changes in some states are bringing registration more in line with actual voting….Republicans have taken the voter registration edge in states such as Florida and West Virginia somewhat recently, and Kentucky flipped to them just last week. Democrats have built bigger leads in several blue states….Democrats hold a substantial national lead in party registration, but a lot of that has to do with the fact that a number of states, many of which are Republican-leaning, do not register voters by party. A little less than two-thirds of the states register voters by party (31 states plus the District of Columbia)….Overall, Republicans have made gains over Democrats in 19 states since summer 2018, when we last looked at these trends, while Democrats have made gains over Republicans in 12 states and the District of Columbia. There are more registered Democrats than Republicans in 17 of these states plus DC, and more registered Republicans than Democrats in 14….Why does all this matter? For a long time, party registration totals have been viewed as a “lagging indicator” of a state’s political evolution, changing more slowly than dominance at the ballot box. As a consequence, registration data has sometimes not been very predictive of how a state would vote. Yet now, as states switch from Democratic to Republican across the South, the data is becoming more reflective of actual election outcomes.” It should also be noted that party registration is not the same thing as “party identification,” which can be revealed by opinion polls. I’m not sure if it is still the case, but for many years registration status was the most accurate predictor of voting. 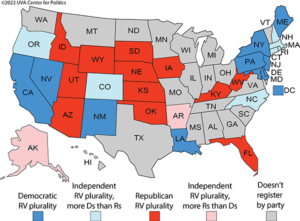 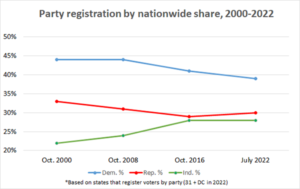 In “What Could Save Democrats From a Midterm Catastrophe?” at The Cook Political Report, Charlie Cook reads the donkey party the riot act, but lets in a sliver of hope: “Democrats fervently hope that the reversal of Roe v. Wade, gun legislation, and the findings of the Jan. 6 committee (or some combination thereof) might galvanize their voters enough to retain at least one chamber. But data suggests that even a combination of all three is unlikely to be the antidote for their problems….The public is exhibiting an incredibly high level of pessimism about the direction of the country thanks in part to a variety of economic indicators that are all flashing red. Inflation is running at its highest rate in more than 40 years, the National Association of Realtors reported in May that the ability of buyers to afford a home hit its lowest levels since 2006, and over half of Americans and a majority of economists are bracing for a recession in the next year or 18 months….With those factors, along with the inability of President Biden and congressional Democrats to even remotely deliver on all they promised, there is plenty to be pessimistic about for Democrats. Midterm elections are basically report cards halfway through a president’s term, an opportunity for voters to choose between “stay the course” or “time for a change.” History shows their proclivity is to opt for a midcourse correction, if not a total reversal of what happened two years earlier….Yet there might be one silver lining for Democrats on the distant horizon. Should former President Trump decide, against the advice of nearly every Republican strategist alive, to announce his candidacy before the midterm elections in November, he might energize Democratic voters enough to minimize their losses at the margins. I am not sure it would save one or both majorities, but it certainly has the potential to have a greater impact than abortion, guns, and Jan. 6 combined….As unpopular as Biden is currently, he still bests Trump in most head-to-head matchups. In fact, Trump is arguably the one Republican that Biden might have a decent chance of beating if he ultimately decides to run for reelection….under the Republican delegate-selection system of winner-takes-all rather than proportional representation, delegates allocated in rough proportion with vote share, the more rivals Trump has, the more ways the anti-Trump or non-Trump vote is split. If that’s the case, then it is more likely for Trump to prevail….But back to 2022. Clearly Democrats need to make this election about anything but Biden and the state and direction of the economy. Can Trump provide the change of venue that Democrats so desperately need?….He will need to for Democrats’ sake, because the stakes are far too high considering historic precedent when a party suffers an election wipeout like Democrats are looking at this year.”

In a FiveThirtyEight post that ought to be required reading for data-crazed political junkies, Nate Silver offers another mini-ray of hope for Dems: “We remain in something of a summer doldrums for polling, and the overall outlook for November remains about the same as in recent weeks. But polls on the race for Congress have continued to inch slightly toward Democrats in what may reflect the impact of the Supreme Court’s decision to overturn Roe v. Wade….In the Deluxe version of our midterm election forecast, Republicans have a 85 percent chance to win the House and a 51 percent chance to win the Senate, both largely unchanged from when we launched the model three weeks ago. Meanwhile, in the Classic version of the model, which sticks to purely quantitative factors and leaves out the expert race ratings published by the Cook Political Report and other such groups, Republicans are actually underdogs to win control of the Senate, with a 39 percent chance.” Silver’s column is really more about how “distinctive” New Hampshire is as a “swingy” state, what makes a state that way and which states fall into that category. But he does conclude, “My subjective experience is that New England is considerably weirder — excuse me, “more distinctive” — than our metric describes it, and that means New England tends to be quite loyal to its incumbents. Hassan will hope that pattern holds.” Hassan, who has recently been listed as one of the more vulnerable Democratic senators, surely knows that hope is good, but working like hell to win her ‘swingy’ constituencies in a tough midterm year is even better.

For a good round-up probe of the effectiveness of the ‘McCaskill strategy,’ in which Democratic campaigns give dough to the more extreme Republican primary candidates they hope to run against, check out “Democrats have been boosting ultra-right candidates. It could backfire” by Nicole Narea at Vox. Narea lists the campaigns in which the strategy has worked well for Dems, and it is an impressive list. The list of campaigns where it has backfired is shorter. But Trump’s victory over Clinton in 2016, which may or may not have been decided by the strategy, is the scariest backfire example. However, the stakes are not quite so high in the midterms, and Democratic campaigns can’t be fairly blamed for using it when it looks promising. It may have worked just last Tuesday, when a Dem-supported extremist got the GOP nomination to run for Governor of Maryland. The Democratic nominee, Wes Moore, now has a much better chance of winning the governorship, according to Maryland pundits. Moore would be Maryland’s first Black Governor if elected. Ovetta Wiggins and Erin Cox reported at The Washington Post, “Moore said in an interview that while he recognizes a victory in November would be historic, that isn’t his goal. “I’m not running to make history,” he said. “I’m running to make inequality history. I’m running to make child poverty history. I’m running to address the issues that Maryland families have been facing for generations, with an urgency that I think it deserves.” Great statement.