Democrats should be cautiously optimistic about the results of the Pennsylvania primary. But columnist Paul Muschick, writing in Allentown’s The Morning Call, observes, “Gov. Doug Mastriano….If that has you rummaging for your Tums, you have plenty of company. Save some for me….The Republican establishment did all it could to prevent Mastriano, a 2020 election conspiracy champion and friend of the QAnon crowd, from winning Tuesday. It doesn’t think he has a prayer of beating well-financed Democrat Josh Shapiro in November….Right-leaning Commonwealth Partners Chamber of Entrepreneurs refused to endorse Mastriano, saying in a statement that he “would not be able to win the swing voters necessary to win in November.”….It seems as if Shapiro wanted Mastriano to be his opponent, too. He was running attack ads against him before the primary. But don’t count Mastriano out….It would be easy to predict the November gubernatorial election will be a repeat of 2018, when even-keeled, borderline boring Democrat Tom Wolf trounced Scott Wagner, a brash-talking Trump clone….I wouldn’t make that bet. The Mastriano-Shapiro race will be tight.” At Sabagto’s Crystal Ball, J. Miles Coleman writes, “Republicans are concerned about their chances in the open Pennsylvania gubernatorial race after far-right state Sen. Doug Mastriano (R) won the party’s nomination. We’re moving that race from Toss-up to Leans Democratic.”

Those following center vs. left trendlines in the Democratic miderm campaigns should read “‘Success begets success’: Progressives look for big boost from key primary wins” by Elena Schneider and Ally Mutnick at Politico. Some excerpts: “Progressives had a big night in their drive to remake the Democratic Party — when their candidates weren’t getting washed away in a flood of super PAC money….There was more outside spending in Tuesday’s Democratic House primaries than in all of their 2020 primaries combined, much of it used to boost moderate Democrats or bash progressive ones. But progressive candidates in several key races showed they could survive the deluge….Summer Lee, who rallied with Sen. Bernie Sanders last week, is hanging on to a narrow Democratic primary lead for a deep-blue seat based in Pittsburgh, where she faced $2 million in negative spending against her. Rep. Kurt Schrader (D-Ore.), one of only two incumbents endorsed so far in 2022 by President Joe Biden, is trailing badly in his redrawn district to Jamie McLeod-Skinner, an Elizabeth Warren-backed challenger who was outspent on TV 11-to-1 by Schrader and his allies, according to AdImpact, a media tracking firm….And this week’s marquee Senate contest was a crowning achievement for the left: John Fetterman, a Sanders supporter who shuns intra-party labels altogether, beat out moderate Rep. Conor Lamb for the Democratic nomination in Pennsylvania….There were notable losses for the progressive wing, as well, in North Carolina and Kentucky, where a trio of more moderate Democratic House candidates won primaries — with significant super PAC support. But overall, the results represented a step forward in progressives’ bid to reshape the Democratic congressional caucuses with new faces and more left-leaning policy views….“Success begets success, so moderates were emboldened by Shontel Brown’s victory [in Ohio earlier this month], and Summer Lee will embolden Jessica Cisneros and Kina Collins,” Shahid continued, citing a pair of progressive challengers running against incumbents in the upcoming Texas and Illinois primaries.” Looking ahead, however, Maurice Mitchell, national director of the Working Families Party, said that Tuesday’s primaries were “an indication that our strategy is working … but we can also do math, and we understand what it means when people are making seven-digit buys” against progressive candidates….Even more of that type of race is on the horizon, including member-versus-member primaries and open-seat battles in Illinois, California, New York and Florida.”

In “The Battle for State Legislatures” at Sabato’s Crystal Ball, Louis Jaobson explains “Given the longstanding polarization and gridlock in Washington, D.C., state lawmakers will decide many key policies state-by-state — particularly on reproductive health issues if the Supreme Court overturns Roe vs. Wade this year. Legislatures could also try to meddle in presidential elections, as then-President Donald Trump asked some to do after the 2020 election….When all the ballots were counted [in 2020], Democrats failed to flip a single GOP-held chamber; the GOP flipped 2, both in New Hampshire. Today, the playing field looks likely to be considerably smaller….This is my first handicapping of state legislative control for the 2022 election cycle….Our analysis is based on interviews with dozens of state and national political sources….At this point, we see 4 chambers as Toss-ups. Of these, 3 of 4 are held by Democrats and are considered prime GOP targets of opportunity: the Maine Senate and House, and the Minnesota House. Meanwhile, the fourth Toss-up is the Democrats’ best target: the Republican-held Michigan Senate….Meanwhile, 3 chambers rate as Lean Republican. One is Democratic-held, and thus leans toward a flip: the Alaska House….The other 2 Lean Republican chambers are the Michigan House and the Minnesota Senate. Both are currently held by the GOP. (Not counting Alaska, Minnesota is the only state that has elections scheduled this year that has its 2 chambers under divergent partisan control — Virginia is another, but it holds legislative elections in odd-numbered years.)…Finally, we rate 3 chambers Lean Democratic: the Colorado Senate, Nevada Senate, and Oregon Senate….All told, that’s 10 chambers that rate as competitive — a relatively small number for recent cycles. Most of them are held by Democrats, putting the party on defense.” 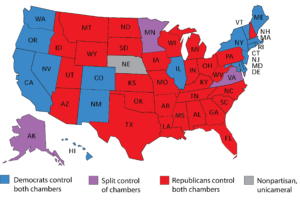