Alex Samuels explains why “Ketanji Brown Jackson’s Nomination May Not Be Enough To Turn Out Black Voters For Democrats” at FiveThirtyEight. An excerpt: “In February, political scientists Jaclyn Kaslovsky of Rice University and Andrew R. Stone of Washington University in St. Louis published a piece in The Washington Post about their research showing that Black Americans place a high value on what’s called “descriptive representation.” In other words, having someone who looks like them in a position of power — particularly in the judiciary — is very important to Black Americans….Kaslovsky told me one reason why Black Americans may want more Black people in positions of power is that they’ve been historically underrepresented in politics. “There’s research arguing that group consciousness matters for how people evaluate political institutions,” she said. “So, as Black Americans become more represented in the judiciary, they may feel like their voices are legitimated by that institution.”….What’s working in Biden’s favor is that polls suggest that Black voters really want Jackson to make it through the nomination process and that her appointment is motivating them ahead of what’s expected to be a grueling midterm cycle for Democrats. While surveys on midterm enthusiasm among Black Americans are generally sparse, at least one survey from Morning Consult/Politico shows that Black voters became more enthusiastic for the midterm elections in late February — right around the time Biden made Jackson’s nomination public. Other polls similarly show Black Americans’ eagerness to get Jackson through the nomination process. According to Navigator Research, 89 percent of Democratic voters and 88 percent of Black voters said they trusted Biden’s judgment on who should be the next Supreme Court justice. In fact, among all races and ethnic groups, Black voters were the most likely to say they would support the Senate’s confirmation of Jackson, at 71 percent; only 11 percent of Black voters said they would oppose the confirmation, for a net support of 60 percentage points. Asian American and Pacific Islander voters had the second-highest level of support for Jackson’s confirmation: 58 percent would support her confirmation, for a net support of 51 points.”….To be sure, Jackson’s nomination is pretty far away from the midterms, and there’s still plenty of time for voters to either forget Biden took this step orwarm up to him before November. As the Morning Consult/Politico poll shows, along with tracking polls from YouGov, Biden’s standing among Black Americans has the potential to rebound. But, as Reece told me, “Biden will have to rely on something else to motivate Black people come November. I’m not sure if Jackson’s nomination will be the thing that gets people out of their seats for a midterm election.”

Nick Hannauer’s “Democrats Need to Fix Rural Economies—and Get the Credit for It” at The American Prospect poses a pretty tough challenge. But what’s a great political party for, if not to meet great challenges? As Hannauer writes, “the political rupture that threatens to tear our nation apart is largely occurring along the urban/rural divide….Throughout rural America, once-vibrant factory towns have been impoverished and dismantled through the offshoring of manufacturing jobs. Local businesses have been struggling to compete against the concentrated buying power of national chains, while local workers have been forced to struggle to make ends meet as monopsony employers have relentlessly pushed down wages. Small and midsize farmers have been at the mercy of a handful of agribusiness giants with the power to dictate the crops to be sown, the livestock to be raised, and the price to be paid for them. Local tax bases have eroded, and with them the services, schools, infrastructure, and other public investments necessary to secure a prosperous future….At the median, rural workers now earn only 82 cents on every dollar earned by their urban counterparts, and as rural jobs grow more scarce and less diverse, rural workers have fewer opportunities to close the gap. Nationally, the U.S. workforce grew by 68 percent since 1975 while rural employment actually shrank by nearly a third. Between 2007 and 2018, just 11 percent of counties captured 9 out of every 10 new jobs, a massive concentration of employment and wage growth in a handful of deep-blue metros. In second-tier cities, small towns, and rural counties, the health and well-being of residents are being left behind.”

Hannauer continues, “If rural voters are angry, they have every right to be—and if they look at the relative wealth and good fortune of “urban elites” and blame their woes on Democratic policies, it’s not hard to understand why. Yes, there is massive and growing inequality within big blue cities too, but in the aggregate these booming cities are receiving nearly all the benefits of the information economy while rural America reliably gets none. Rural voters are angry, and lacking a more obvious villain they routinely punish Democrats, the party of the cities, at the polls. As the violent rhetoric surrounding the January 6th insurrection indicates, there’s a not insignificant number of Republicans who passionately believe that electoral defeat isn’t nearly punishment enough….In nearly every recent election cycle, Democratic candidates routinely receive millions more votes than Republican candidates for the House, the Senate, and the White House, and yet the Republican Party could plausibly establish a regime of minority rule (not to mention a stranglehold on the federal courts) for at least a generation to come. Beholden, both ideologically and financially, to corporate interests, Republican elected officials do little if anything to actually help their rural constituents. Instead, they nurture a politics of grievance. But given the failure of Democrats to offer a compelling alternative, grievance alone appears more than enough for Republicans to continue to secure the rural vote….President Biden and congressional Democrats have a frighteningly narrow window to persuade a small but electorally significant percentage of rural voters that only Democrats can and will serve their communities’ needs. To do this, Democrats need to aggressively run on rural revitalization as a centerpiece of their economic agenda in 2022, 2024, and beyond, while immediately using every policy tool at their disposal to begin the difficult work of reversing the extreme geographic inequality that the past 40 years of neoliberalism has wrought….Democrats don’t need to persuade a majority of rural voters, or even a lot of them. Just a few percentage points in a handful of swing states would be enough to block the Trumpist forces from seizing hegemonic minority rule. And that would also give Democrats the breathing space they need to do the hard work necessary to assure that the state of the union between urban and rural America is once again strong.”

In their post, “Notes on the State of Politics: March 24, 2022,” Kyle Kondik and J. Miles Coleman sketch one key aspect of the daunting challenge facing Democrats at state-level politics: “The Democrats do not control a single chamber in a state that Donald Trump won with the debatable exception of Alaska’s state House, where Republicans have a majority of members, but a coalition of Democrats, independents, and Republicans elected the chamber’s speaker. Meanwhile, Republicans hold both chambers in 6 Biden-won states (Arizona, Georgia, Michigan, New Hampshire, Pennsylvania, and Wisconsin) and a single chamber in 2 others, Minnesota and Virginia, for a total of 14 Biden-state chambers. Overall, Republicans hold 61 chambers — 62 if one includes Nebraska’s technically nonpartisan but functionally Republican unicameral state legislature — while Democrats hold 36, with Alaska’s House not counted in either side’s tally.” They share this map: 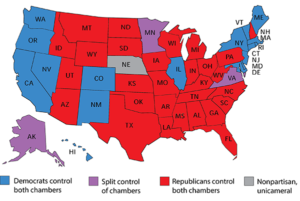