Washington Post columnist E. J. Dionne, Jr. writes that “Unprecedented, redistributive government spending across the wealthy countries prevented the pandemic downturn from becoming another Great Depression. At the same time, the seething social resentments that right-wing populists brought to the fore forced even the complacent to recognize the dislocations and injustices bred by rising inequality over the last half-century….This shift toward interventionism has been reinforced by a climate crisis whose dangers are increasingly obvious to large majorities across the democratic world….All this has led to a resurgence of social democracy’s core idea: that market economies can thrive only when governments underwrite them with strong systems of social insurance, new paths to opportunity for those cast aside by capitalism’s “creative destruction,” and updated rules to advance social goods that include family life, education, public health — and the planet itself….This explains why there is more unity among Democrats than skeptics expected around Biden’s big investment program. Its emphasis on shared social needs reflects how broad the new consensus is. It encompasses pro-capitalist moderates such as Sens. Mark R. Warner (D-Va.) and Jon Tester (D-Mont.) no less than democratic socialists such as Sen. Bernie Sanders (I-Vt.) and Rep. Alexandria Ocasio-Cortez (D-N.Y.).”

From postfun.com: There are more people in the red areas than the grey, which may help explain political ad buys. 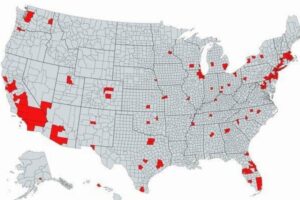 In an article orginally published in The National Journal, Charlie Cook writes at the Cook Political Report: “One Washington Post column cited a recent Navigator survey conducted for a group of liberal labor groups and individuals involved in Democratic politics and policy. Three in five registered voters in its national sample said they believe that the country is in crisis—72 percent of Republicans, 60 percent of independents, and 53 percent of Democrats. When respondents were given a list of 14 different possibilities and asked which ones they considered a major crisis, the top issue was violent crime, with 54 percent. Fifty-seven percent of Republicans said so, as did 52 percent of independents and Democrats. This was 3 points higher than the coronavirus pandemic and well above a whole host of Democratic priorities, including China, climate change, voting, joblessness, and infrastructure, as well as “cancel culture.”….As Biden tries to navigate rising crime, he and his team are clearly mindful of how toxic his party’s most extreme voices are to swing voters. Despite his efforts to create a lot of distance from that movement, there is a certain guilt by association that’s amplified very effectively by his GOP and conservative critics….Many Democrats—including Biden at his press conference on crime last month—point to their efforts to enact tougher gun laws. But voters are savvy enough to know that new regulations on guns aren’t likely to get through Congress. Until then, they want to know: What happens? What else can you do to keep me safe? Democrats’ majority may depend on their answer.”

At Politco, Steven Shepard notes: “A new, highly anticipated report from the leading association of pollsters confirms just how wrong the 2020 election polls were. But nine months after that closer-than-expected contest, the people asking why are still looking for answers….National surveys of the 2020 presidential contest were the least accurate in 40 years, while the state polls were the worst in at least two decades, according to the new, comprehensive report from the American Association for Public Opinion Research….The most likely — if far from certain — culprit for off-kilter polling results is that key groups of people don’t answer polls in the first place….Comparing the final election results to the poll numbers for each candidate, Trump’s support was understated by a whopping 3.3 points on average, while Biden’s was overstated by a point — turning what looked like a solid Biden lead into a closer, if still decisive, race….It wasn’t just a Trump effect, either. The polls of Senate and governor’s races were off by an even greater margin: 6 points on average….Without definitive answers about the causes of the 2020 miss, however, pollsters aren’t sure they’ll be able to get it right in 2022, 2024 or beyond.”