In “The Jan. 6 Committee Is Politically Terrible For Republicans — And They Did It To Themselves,” Kate Riga writes at Talking Points Memo: “Pelosi chose Rep. Liz Cheney (R-WY) as one of her eight selections. Cheney already lost her leadership position within the Republican caucus over her refusal to accept the big lie, and said she was “honored” to serve….Picking Cheney allows Pelosi to avoid the narrative that would have dominated the independent commission, where the Democratic and Republican appointees would have been evenly split. Instead of neat, party-line battles between Democratic and Republican appointees, Pelosi will likely be able to tout bipartisan decisions and findings, as Cheney has an actual interest in investigating what happened. The independent commission was much more likely to end in a partisan schism, perhaps even with dueling majority and minority reports….Ultimately, Republicans saved Democrats from themselves. Democrats right up to Pelosi made clear that they preferred the independent commission model, regardless of its built-in features that would have made it easier for Republicans to manipulate…..Expect months of GOP objection to every move the committee makes — “witch hunt!” — and dismissal of its fact-finding. But its discoveries will be covered and conclusions made known, with Republicans having very little say over the matter. For that, Republicans have no one to blame but themselves.”

NYT columnist Thomas B. Edsall explores the phenomenon of “political schadenfreude” in politics, and notes, “In their July 3 paper, “Partisan Schadenfreude and the Demand for Candidate Cruelty,” Steven W. Webster, Adam N. Glynn and Matthew P. Motta, political scientists at Indiana University, Emory and Oklahoma State, explore “the prevalence of partisan schadenfreude — that is, taking ‘joy in the suffering’ of partisan others.”….In it, they argue that a “sizable portion of the American mass public engages in partisan schadenfreude and these attitudes are most commonly expressed by the most ideologically extreme Americans.”….In addition, Webster, Glynn and Motta write, these voters create a “demand for candidate cruelty” since these voters are “more likely than not to vote for candidates who promise to pass policies that ‘disproportionately harm’ supporters of the opposing political party.”….In response to my emailed inquiries, Webster answered: Schadenfreude is a bipartisan attitude. In our study, the schadenfreude measure ranges from 0-6. For Republicans, the mean score on this measure is 2.81; for Democrats, it is 2.67. Notably, there is a considerable amount of variation in how much partisans express schadenfreude: some express very little schadenfreude, while others exhibit an extraordinary amount. Those who identify as a ‘strong Democrat’ or a ‘strong Republican’ tend to express greater levels of schadenfreude than those who do not strongly identify with their party.”….Democrats should consider that Schadenfreude is not a particularly good look for any political candidate, who hope to win over swing voters who are tired of all the bickering. And yet, there are studies which indicate that negative campaigning works.

Some key points from “Where Both Parties Overperform in the House” by Louis Jacobsen at Sabato’s Crystal Ball: “— As we head into a once-a-decade redistricting cycle, we analyzed which states have one party that is currently overperforming in its House delegation compared to that party’s share of the 2020 presidential vote.— Overall, the GOP has notched notable overperformances in 19 medium-to-large-sized states, compared to 11 for the Democrats. However, the total number of excess seats for each party from these states is roughly in balance, though Republicans have a slight edge: 32 for the GOP, 28 for the Democrats.— The three biggest sources of excess seats for the GOP today — Texas, Ohio, and Florida — could provide additional excess seats in the coming redistricting round, given the fact that each state has unified Republican control of state government. The Democrats’ options for squeezing out additional seats are more limited because many of their biggest sources of excess seats have a commission system for redistricting.” 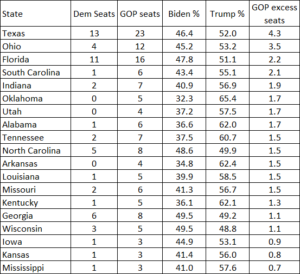 Republican Rep. Chip Roy of Texas was caught spilling the beans. As Jake Johnson reports at Common Dreams: “Newly leaked video footage of a recent event hosted by the right-wing group Patriot Voices shows Republican Rep. Chip Roy of Texas openly admitting that his party wants “18 more months of chaos and the inability to get stuff done” as President Joe Biden, a bipartisan group of senators, and congressional Democrats work to pass climate and infrastructure legislation….”Honestly, right now, for the next 18 months, our job is to do everything we can to slow all of that down to get to December of 2022,” Roy says in the clip, referring to the month after that year’s midterm elections. Republicans need to flip just a handful of seats to take back the House and Senate….”I don’t vote for anything in the House of Representatives right now,” Roy says in response to an audience member’s question about the sweeping infrastructure and safety-net package that Democrats are planning to pass unilaterally alongside a White House-backed bipartisan deal….As the clip of Roy circulated online Tuesday, McConnell (R-Ky.) told a Kentucky audience that Republicans intend to give Democrats a “hell of a fight” over their plans to pass a multitrillion-dollar infrastructure bill using the budget reconciliation process, which is exempt from the Senate’s 60-vote legislative filibuster—an archaic tool that McConnell has repeatedly used to obstruct Democratic legislation….Rep. Pramila Jayapal (D-Wash.), chair of the Congressional Progressive Caucus, noted Monday that “not a single Republican voted for the American Rescue Plan,” a popular $1.9 trillion reconciliation package that included direct relief payments, an extension of emergency unemployment programs, and funding for vaccine distribution.” With Roy, McConnell and other Republicans bragging about their obstruction intentions, Democratic ad-makers have the resources to do a hell of a mash-up ad illustrating the GOP = Gridlock, Obstruction and Paralysis equation for the midterm elections.