The Data for Progress Newsletter reports that “Our latest polling with Invest in America on Biden’s Build Back Better infrastructure initiatives finds that bipartisan negotiations haven’t caused voters to lose their enthusiasm for the bold structural changes contained in the American Jobs Plan and the American Families Plan — in fact, they are strongly supportive of the clean energy, long-term care, and education investments contained in the American Jobs Plan, by +60-points, +53-points, and +41-points, respectively….In the same survey, we found that voters want to pass the AJP and AFP together via reconciliation by +31-points — news the White House seems glad to hear. 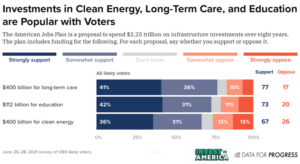 Commenting on the New York City Mayoral election in his column, “‘New York City Is a World Unto Itself.’ But It May Tell Us Where Democrats Are Headed,” Thomas B. Edsall writes that “In census tracts with a majority or plurality of whites without college degrees, Adams — who repeatedly declared on the campaign trail that “the prerequisite for prosperity is public safety” — led after stage one of the New York City Democratic primary last week, according to data provided to The Times by John Mollenkopf, director of the Graduate Center for Urban Research at C.U.N.Y….Adams took 28.5 percent of the first-choice ballots among these white voters, compared with the 17.1 percent that went to Garcia, who is white and has served as both sanitation commissioner and interim chairman of the New York City Housing Authority, and the 15.4 percent that went to Wiley ….Adams’s strength in non-college white tracts shows that his campaign made substantially larger inroads than either Garcia or Wiley among white working-class voters, a constituency in which the national Democratic Party has suffered sustained losses….Adams’s biggest margins were in Black majority non-college tracts, where he won with 59.2 percent to Wiley’s 24.4 percent and Garcia’s 4.7 percent. In Black majority college-educated tracts, Adams won a plurality, 37.5 percent, to Wiley’s 32.5 percent and Garcia’s 13.0 percent….Counting all the census tracts with a majority or plurality of adult voters who do not have college degrees, Adams won decisively with 42.1 percent — compared with Wiley’s 19.7 percent and Garcia’s 10.3 percent.”

Edsall quotes Jonathan Rieder, author of “Canarsie: The Jews and Italians of Brooklyn Against Liberalism,” who notes, “For all the gradual shrinkage of white non-college voters, the Democrats still require a multicultural middle to include non-affluent and lesser-educated whites in their majority coalition. And that will be hard to secure if the party is identified with ceding the border, lawlessness, ignoring less privileged whites, exclusionary versions of anti-racist diversity that smack of thought reform, phrasing like Latinx that large numbers of Latinos find off-putting, esoteric or perplexing, and so much more.” Edsall adds, “Margaret O’Brien Steinfels, who founded the Fordham Center on Religion and Culture with her husband Peter Steinfels, argues that Adams’s lead rests on four factors: (A) the “crime wave” that became the hot issue in the campaign; (B) on Adams’s story of experiencing police abuse and then being in the police; (C) on the emerging sense that Black voters are “moderates” — pace the views of progressives and young B.L.M. advocates (Black and white) — that N.Y.C. is a union city and that Adams had important endorsements; (D) Adams was pretty clearly the “working class” candidate and he campaigned in relevant districts. Defunding the police, which Adams opposes, is not a winning policy as Biden’s announcements on crime this past week underlined.”

At The Daily Beast, Matt Lewis shares some insights derived from the recent Pew Research poill: “To be clear, Biden did not win the married white male vote or “veteran households.” But the data suggests that Biden won the election by making inroads with these traditionally center-right constituencies by broadening his base of support—as opposed to winning by juicing traditionally Demographic constituencies. In other words, Biden won the presidency by losing groups of Americans like non-college whites by a smaller percentage than Hillary Clinton—and that made all the difference in the world….It’s possible a different Democratic candidate might have turned out higher numbers of voters traditionally assumed to represent progressive constituencies. However, Cohn (whose expertise is covering polling and demographics) is appropriately skeptical of this alternative electorate. And I agree with him. Trump drove progressive turnout. And even if minority turnout were higher in, say, California, it wouldn’t matter because of the electoral college. And any turnout gains made by a different Democrat (like Bernie Sanders—who won the New Hampshire primary) may have been offset by votes that were only gettable by Biden….Why does this matter? People in the Democratic Party (especially progressives) don’t fully appreciate or understand the coalition that got Biden elected in the first place. Indeed, I’m not sure Biden even fully appreciates this (if he did, he would more forcefully stand up to the left in his party), though he certainly has a better sense of it than most of his fellow Democrats.”