In “Redistricting Holds Key to House Majority” at The Cook Political Report, Amy Walter writes: “Since the end of the Civil War, the party holding the White House has lost House seats in 36 out of the 39 midterm elections. Then there’s the fact that midterm elections are almost always referenda on the incumbent president, even more so when a party bears full responsibility for governing….President Biden’s job approval rating at this point sits at 52 percent. The good news for Democrats: he’s above water. The bad news for Democrats: this may be his high watermark. Even as Biden has presided over a successful roll-out of the COVID vaccine and a re-opening of the economy, support among independent voters is tepid. At the same time, approval among Republicans is pretty much non-existent. In other words, if this is where Biden’s job approval sits when things are going relatively well, and his administration hasn’t made obvious fumbles, it’s hard to see how his job approval ratings can go much higher in these next few months. Plus, it’s easy to see how a mediocre or troublesome next year can easily drag those approval ratings down….

Walter notes, further, that “we have no idea if the surge of voters we saw flood into polling places in 2018 and 2020 will remain engaged in politics now that Donald Trump is no longer on the ballot or in the White House. Moreover, writes demographic guru Ron Brownstein, more Democrats than Republicans turned out to vote in the Trump era, giving Democrats a bigger pool of potential voters to turnout in 2022.” However, “In 2021, the GOP will control the remapping process in 20 states with 187 districts, while Democrats will be able to draw the map in 8 states with 75 districts. Independent commissions will draw maps in 10 states with 121 districts. Just six states with 46 districts have split control….Republicans control line drawing in twice as many districts as Democrats. There’s also the fact that maps drawn by “independent commissions” like those in Ohio, New York, Utah and Iowa can be overturned by a vote of the state legislature. Only New York has a Democratic-controlled legislature and governor.” Walter concludes, “Traditionally, a midterm election is driven by two major factors — the political environment and opinions about the sitting president. This year, however, it is redistricting that is likely to be the most significant. In fact, until we know what the new lines are going to look like, discussions about Biden’s approval ratings, the political climate, or the makeup of the electorate are pointless.”

“A Gallup poll earlier this year also found that only 27 percent of Americans were satisfied with the nation’s policies to reduce or control crime, and that 65 percent were dissatisfied,” Nathaniel Rakich writes at FiveThirtyEight. “That’s a big change from 2020, when 47 percent were satisfied and 49 percent were dissatisfied….Altogether, this has sparked a narrative that the rise in violent crime poses a political problem for Democrats, who are the ruling party and also traditionally perceived as softer on crime. But at this point, it’s not really clear that the crime issue will hurt Democrats and anti-police progressives politically. For starters, Americans are actually pretty divided on what the best solution to stopping crime is. In a YouGov/Yahoo News poll from May 24-26, 32 percent of adults said that law enforcement is not tough enough on most offenders — but about the same amount, 27 percent, said law enforcement is too tough on most offenders. (Eighteen percent thought law enforcement’s level of toughness was about right, while 22 percent weren’t sure.)….The public is also pretty sharply divided on whether Democrats or Republicans are better on the issue of crime. When asked whether Biden or former President Donald Trump has done a better job handling crime, 34 percent of respondents to the YouGov/Yahoo poll said Trump, while 32 percent said Biden….Similarly, in elections so far in 2021, it also doesn’t look like crime is driving voters toward more conservative candidates. True, this week’s Democratic primary for mayor of New York City focused heavily on crime, and the winner was most likely Brooklyn Borough President Eric Adams, arguably the race’s most pro-police candidate. But there are plenty of counterexamples: In the Democratic primary for Philadelphia district attorney, incumbent Larry Krasner — the George Washington of the progressive criminal-justice movement — handily defeated a moderate who attempted to tie Krasner’s policies to Philadelphia’s rising crime rate. And in this month’s special election for New Mexico’s 1st Congressional District, the Republican candidate ran what was virtually a single-issue campaign on crime and policing issues; Democrat Melanie Stansbury ended up winning by 25 percentage points, exceeding the district’s D+18 partisan lean.”

At Sabato’s Crystal Ball, Kyle Kondik shares the latest map depicting “Party control of statewide elected executive offices” and writes: “Currently, one party controls all of the statewide elected executive offices in 36 of the 50 states….Candidate decisions by down-ballot executive officeholders in Florida and Missouri could make Republican statewide sweeps easier in those states, and Democrats may have opportunities to sweep more states on their side….Democrats could sweep Maryland and maybe Massachusetts. Popular Gov. Phil Scott (R-VT), the lone Republican elected in Vermont, has to run every two years. If he were to not run again, Democrats could sweep there….Arizona, Iowa, Kansas, and Nevada are split states that all should feature competitive races next year. Sweeps can’t be ruled out in any of them….The bottom line is that we may have even more one-party statewide executive states after 2022 than we have now, which would fit in with a larger trend toward one-party dominance in many of the states.” 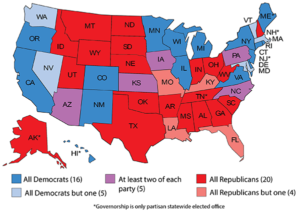