In his Washington Post column, “Georgia’s voters end the Trump era. Definitively,” E. J. Dionne, Jr. writes, “Thanks to the voters of Georgia, the 2020 election looks very different than it did 48 hours ago. President-elect Joe Biden will now govern with a Democratic Senate and a Democratic House. The margins will be thin, but the power of Republicans to obstruct has been sharply diminished….And the political map of the United States looks very different, too. Four years ago, it was unimaginable that Democratic control of the elected branches of the federal government would be cemented by victories in Senate races in Georgia. The Rev. Raphael Warnock and Jon Ossoff won in a state that had not elected a Democrat to the Senate in two decades….The outcome put an exclamation point on Biden’s success and a dagger into the Trump era. President Trump almost certainly hurt Republicans Kelly Loeffler and David Perdue, both directly and indirectly….Their defining issues were economic, and their victories would make it far easier for Biden to enact a large new relief package, a major infrastructure program, and expansions in health-care coverage and child care — as well as democracy reforms and voting-rights protections….Georgia’s choice will make an enormous difference in Washington — easing passage of Biden’s program, speeding the confirmation of his appointees and enabling the new president to fill empty court seats.”

Stacey Abrams marked Trump’s riot at the capitol with an eloquent meme: 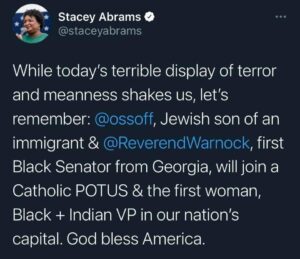 Geoffrey Kabaservice shares some insights on the Georgia Senate flip at The Guardian: “The election returns from Georgia are showing a consistent pattern of Democrats having shown up at the polls at rates approaching their general election turnout, while significant numbers of Republicans stayed home. Democrats did a superb job of voter mobilization, including the door-to-door efforts that they chose not to undertake for pandemic-related reasons in the lead-up to the November elections. But they also made the straightforward argument that the Georgia elections mattered because Biden’s success in appointing officials and passing progressive programs would depend upon Democrats retaking control of the Senate….Credit for the victories must go to the candidates themselves, get-out-the-vote organizers in Georgia’s minority communities (Stacey Abrams above all), and Democratic donors and volunteers from all over the country. But the Republicans did as much to lose these elections as the Democrats did to win them.”

After giving Warnock, Ossoff and their campaigns, along with Abrams and Georgia’s energetic activist community due credit, there’s no avoiding the conclusion that Trump’s blundering clusterfuck rhetoric and behavior made the Georgia senate flip inevitable. Alex Isenstadt notes at Politico that “senior Republicans are in near universal agreement that Trump’s relentless, two-month assault on voting processes around the nation and in Georgia played a major role in the party’s twin defeats in the state….Scott Jennings, a Kentucky-based GOP strategist and longtime McConnell confidante, noted that the party had suffered poor turnout in conservative areas of Georgia where Trump had strong support. “That’s on him. He told them their votes didn’t count, and some of them listened,” Jennings said….GOP officials had conducted internal polling showing that moderate voters were especially receptive to the idea that a Republican-controlled Senate would provide a needed check on the Biden White House. But Republicans concluded they couldn’t wage a check-and-balance focused campaign because it would be an implicit acknowledgment that Trump had lost, something that would alienate the president and his supporters….“Republicans had everything going for them in this race, except Trump. If this election had been about checks and balances, then the Republicans would have won. Instead it was about Trump and his conspiracy theories,” said Republican strategist Alex Conant, who was a top adviser on Florida Sen. Marco Rubio’s 2016 presidential campaign….“By constantly exacting a pledge of fealty from the Republican candidates he basically froze them in place and made it almost impossible for them to run their own races. Instead they were in this constant state of reaction to Trump and his whims — whims that were toxic in the most important suburban areas of the state,” said Kevin Madden, a top adviser on Mitt Romney’s 2012 presidential campaign.”