At Politico, Elena Schneider and James Arkin report that “GOP winning the Georgia ad war as Dems shift money to ground game: Super PACs have tilted the advertising battle toward Republicans, as Democratic donors invest in groups working on the ground.” They explain that “Republicans hold an overall advertising advantage across the state, largely fueled by $86 million in outside spending supporting their candidates, compared to just $30 million spent by Democratic outside groups on TV advertising so far, according to AdImpact. Democratic candidates Jon Ossoff and Raphael Warnock are hauling in record small-dollar cash, far ahead of GOP Sens. David Perdue and Kelly Loeffler — but not enough to own the airwaves….Super PACs pay more per ad than candidates do, so Ossoff and Warnock have been able to blunt the GOP’s financial edge, especially in the Atlanta media market, where nearly two-thirds of people in the state reside. But GOP TV ads are running in much higher rotation in other markets, according to data from AdImpact, and the disparity has sparked concern among Democrats that the two campaigns aren’t getting enough help with control of the Senate on the line.”

Ronald Brownstein writes at The Atlantic: “Biden should target McConnell almost immediately, says Sean McElwee, a founder of the progressive polling-and-analysis firm Data for Progress, one of the organizations that signed the open memo. “Democrats really need to start making people understand that Mitch McConnell is leading a do-nothing Senate that should be replaced in the midterms,” McElwee told me. “You want to make Mitch McConnell the enemy, and we need to get his favorables down to nil and then tie all of the Republicans to” him….By contrast, the centrist Democratic group Third Way this week released a poll  showing that a strong majority of registered voters want political leaders in both parties to seek compromise. In the survey, 85 percent of self-identified Democrats and two-thirds of Republicans said they prefer political leaders who will “compromise in order to get things done….In practice, these two perspectives may not really be all that different. McElwee agrees that Biden should work, wherever possible, to divide the GOP by seeking to attract at least a few Republican senators to his policy priorities. And Bennett said that while Biden must continue to pursue agreements “in the hope that Republicans will come to their senses, he also needs to be mindful that they may not.”

“Through no fault of his own, Biden’s legislative agenda is blocked for at least the first two years of his presidency, and most likely for the entirety of his first term,” Martin Longman writes in “How Biden Can Have a Successful Presidency Without Congress: Barry Lynn provides a roadmap that Biden use to take on monopolies–without Mitch McConnell’s help. Now state attorneys general are stepping up their game, too.” at The Washington Monthly. “He can resign himself to being ineffectual, or he can use the antitrust tools he has at his disposal, and those tools are more powerful than is commonly understood.” Longman then quotes from Barry Lynn’s How Biden Can Transform America: “On day one, President Biden will be able to strap himself into the cockpit of a governing machine purpose-built during the Wilson and Roosevelt administrations—and fortified by Truman, Dwight Eisenhower, Lyndon Johnson, and even Richard Nixon—to break power, distribute opportunity, build community, protect security, and engage citizens in constructive activities. This system includes agencies with great untapped powers, like the FTC and the Department of Agriculture, which have far-reaching and long-neglected rule-making authority. And it includes strong anti-monopoly powers in just about every office of government, including the Federal Reserve, the Treasury Department, the Federal Communications Commission, the Securities and Exchange Commission, the Defense Department, the Transportation Department, and the Federal Energy Regulatory Commission, among many others.” Longman adds, “While the public is focused on quarrelsome and unproductive debates on Capitol Hill, he can work behind the scenes to bust up monopolies. He’ll find sympathetic ears on the right where concern about market concentration is on the rise.”

From a Hill-HarrisX poll, which was conducted online among 3,785 registered voters Dec. 3-7: 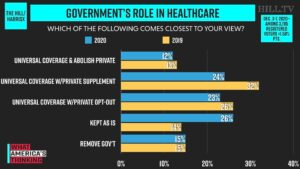