In “How Georgia’s Senate race pits the Old South against the New South,” Maya King writes, The state has seen an influx of young people of color and college educated voters of all races, which has boosted the population by nearly 10% over the last decade, according to census data. Immigrants from Latin America, Asia and Jamaica also account for these changes. The immigrant population jumped 84 percent between 2010 and 2018, putting Georgia on the fast track to become majority-minority by 2030. Black, Latino and Asian voters in the once-Republican Atlanta suburbs helped deliver the state for Joe Biden in November. In the Peach State — and soon, strategists argue, the rest of the South — demography is becoming destiny….Carolyn Bourdeaux, who won one of a handful of down-ballot Democratic victories in Georgia, faced similar attacks from her Republican opponents during her House race. One ad described her as a “dangerous reckless extremist” who has “taken cash from groups who want to defund … the police,” which Democrats have cited as an anchor to their effort to expand their House majority. Bourdeaux said she decided to ignore Republican attack ads and focuses on policy points instead. “I try to sum it up by saying I’m here to take a passionate stand for the common-sense solutions that people in this district need,” said Bourdeaux, the only Democrat to flip a red seat this election. “And then combine it with building and engaging with the diverse communities that are now in Georgia.”

If you were wondering how many Americans are actually paying attention to politics, Nathaniel Rakich has some recent data on the topic in “Other Polling Bites” at FiveThirtyEight: “We at FiveThirtyEight were glued to the election results as they came in about a month ago, and it turns out we weren’t alone. According to a recent Pew Research Center poll, 36 percent of Americans say they followed the results of the election “almost constantly,” while another 34 percent “checked in fairly often.” Twenty-two percent said they “checked in occasionally,” while only 7 percent “tuned out entirely.” And, if you were wondering where Americans get their political news, Elizabeth Grieco notes at Pew Research Center that a survey of 12,043 adults who are members of the Center’s American Trends Panel found that, “In a late 2019 survey conducted as part of Pew Research Center’s Election News Pathways project, Fox News and CNN were named by the largest segments of U.S. adults as their main political news source – 16% and 12%, respectively. Six other news outlets – NPR, NBC News, ABC News, MSNBC, CBS News and The New York Times – were named by at least 2% of adults. The sources named by the remaining 51% of U.S. adults resulted in a long tail of more than 50 other individual brands….In all, about half (49%) of U.S. adults named one of these eight outlets as their main source for political and election news. The long list of all other individual outlets, named by fewer than 2% of respondents, included larger sources like The Washington Post, the BBC and Rush Limbaugh, as well as more niche sources such as One America News, The Young Turks and individual local newspapers. Some of the remaining respondents named social media sites (4% in total) or a medium without any specific outlet specified (“radio,” “the internet”). Finally, 13% of respondents declined to provide a recognizable news outlet, left the field blank or said they didn’t remember the name of their main news source.”

Here’s a chart from Grieco’s article showing some demographic breakdown data from the survey’s findings: 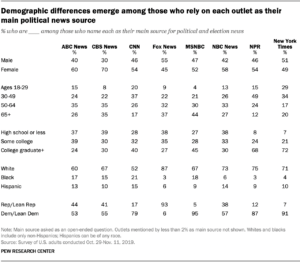