Debates are seldom pivotal for determining election outcomes, but Democrats should be encouraged by Andrew Prokop’s “The first post-VP debate poll says Kamala Harris won” at Vox, which notes that “the first poll we have of vice presidential debateviewers is good news for Sen. Kamala Harris — and her running mate, Joe Biden…The poll, conducted by CNN and SSRS, found that 59 percent of debate watchers thought Harris won, and 38 percent thought Vice President Mike Pence won, an impressive margin of victory for Harris…In comparison, a poll by CNN after the 2016 vice presidential debate found that Pence won: 48 percent of respondents that year gave the victory to Pence and 42 percent to Hillary Clinton’s running mate, Sen. Tim Kaine (D-VA)… CNN’s David Chalian pointed out on air that part of Harris’s margin is explained by the poll’s sample skewing more Democratic. But that’s not enough to explain all of Harris’s margin: 38 percent of respondents were Democrats, 29 percent were Republicans, and 33 percent were independents…69 percent of women who watched thought Harris won, and 30 percent thought Pence did. Among male viewers, it was a near tie — 48 percent thought Harris won, and 46 percent thought Pence did.”

Looking ahead to the next presidential debate, Dan Merica. Kevin Bohn and Chandelis Duster report at CNN Politics that “Trump says he won’t participate in next debate after commission announces it will be virtual,” and write, “The second presidential debate will take the form of a town meeting, in which the candidates would participate from separate remote locations,” the commission said in a statement. “The town meeting participants and the moderator, Steve Scully, Senior Executive Producer & Political Editor, C-SPAN Networks, will be located at the Adrienne Arsht Center for the Performing Arts of Miami-Dade County in Miami, Florida. The White House Pool will provide coverage of the second presidential debate.”…”I am not going to do a virtual debate,” Trump said on Fox Business. “I am not going to waste my time on a virtual debate.”…Trump’s comment throws into question the second debate after the commission took the significant steep to wholly remake the contest between the two candidates. The move was seen as needed by members of the debate commission given the uncertainty around the President’s health.”

Ramsey Touchberry writes at Newsweek: “Senate Republicans enter the final weeks of this election pouring millions of dollars into states they never expected would be competitive, and are still struggling to explain their indefensible records of voting to eliminate protections for pre-existing conditions and their failed coronavirus response…Sen. Martha McSally (R) is projected to lose her re-election fight to Democrat Mark Kelly, a former astronaut. Cook Political Report rates the race as “lean Democrat.” FiveThirtyEight predicts there is a 79 percent chance Kelly wins…Sen. Cory Gardner (R) is also projected by Cook to lose against Democratic Gov. John Hickenlooper. Cook has the race as “lean Democrat.” FiveThirtyEight gives Hickenlooper a 75 percent chance of winning, up from 65 percent on September 2….Cook rates the match between Sen. Susan Collins (R) and Democratic challenger Sara Gideon, speaker of the Maine House of Representatives, as a “toss-up.” FiveThirtyEight has increased the likelihood Gideon unseats Collins from 51 percent on September 16 to 62 percent as of Tuesday….Another “toss-up” race by Cook, FiveThirtyEight shows Sen. Joni Ernst (R) and Democratic challenger Theresa Greenfield virtually tied. Last month, they predicted Ernst with a 59 percent chance of winning but have since decreased it to 51 percent.”

“President Trump spent Tuesday night tweeting madly for hours about Hillary Clinton and Barack Obama and various conspiracy theories about the 2016 election,” Heather Digby Parton writes at salon.com. “Twitterati speculated that his experimental drug cocktail and steroid treatment for COVID-19 might be making him manic and grandiose. But how could you tell, really? This is pretty much his normal modus operandi…Considering the Soviet-style propaganda campaign they’ve been running at 1600 Pennsylvania Avenue, that’s no surprise…The White House is apparently in total chaos, which isn’t really news, but there does seem to be a certain desperation that isn’t always present. This is likely because of Trump’s atrocious messaging to the public over the past few days, in which he’s pretending he has “beaten” the virus with his strength and virility, and telling people to stop letting the virus “dominate” their lives.” 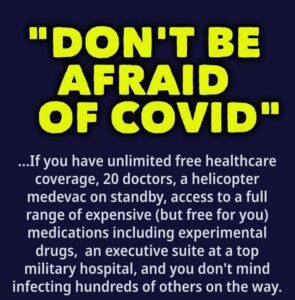 In “GOP Senate majority at risk after monster fundraising quarter by Democrats,” David M. Drucker writes at the San Francisco Examiner: “Democratic candidates are raising hundreds of millions of dollars. Even previously overlooked challengers saw their coffers swell with contributions from energized grassroots liberals in July, August, and September, turning sleepy Senate races into a potential nightmare for sitting Republicans and the party’s precarious three-seat majority…It’s no longer just Arizona, Colorado, and Maine, blue-trending battlegrounds where Republicans were prepared for a dogfight from the beginning of the 2020 cycle — or purple states such as Iowa and North Carolina. They are now looking over their shoulder in typically ruby-red territory such as Alaska, Georgia, Kansas, Mississippi, Montana, and South Carolina….“The numbers are astounding,” GOP operative Doug Heye said. “Republicans are right to be concerned.”..Third-quarter fundraising totals are not due to be released until Oct. 15. But Democrats have begun publicizing their numbers…The cash allows Democratic challengers a chance to drown out Republicans on television and fund robust voter turnout operations with all of the technological frills.”

Nathaniel Rakich shares findings from FiveThirtyEight’s “third and final forecast of the 2020 election,” and writes, “while Democrats are slight favorites to flip the Senate and Joe Biden is a solid-but-not-overwhelming front-runner for the presidency, Democrats have between a 92 and 97 percent chance of keeping control of the House…Democrats must defend 30 seats in districts won by President Trump in 2016 (as opposed to only six Republicans who sit in districts that Hillary Clinton carried)…And now that we have a House forecast, we can combine it with our Senate and presidential forecasts to determine the odds that either Democrats or Republicans will have full control of the federal government…the likeliest scenario is that Democrats will win full control of the federal government: There’s a 63 in 100 chance of that happening…But there is also a good chance (31 in 100) that we will once again have a divided government in Washington…”

From today’s update on election trends by Kyle Kondik and J. Miles Coleman at Sabato’s Crystal Ball: “Recent rosy polling for Joe Biden in the presidential race may represent an artificial sugar high for the challenger…But at this point, Donald Trump needs to be making up ground — not treading water or falling further behind…11 rating changes across four categories of races (president, Senate, House, and governor) almost exclusively benefit Democrats…Biden’s leads in the RealClearPolitics and FiveThirtyEight polling averages are now close to 10 points apiece, and a couple of respected national polls, CNN/SSRS and NBC News/Wall Street Journal, have shown Biden leading by 16 and 14 points, respectively. The state-level numbers generally have been bad for the president, too: for instance, Monmouth University pegged Biden’s lead in Pennsylvania earlier this week at around 10 points; the pollster’s previous Keystone State survey had Biden up only a few points based on different turnout models. In other words, one of the better state-level polls for Trump in a key state was reversed in fresher polling.”