Mary Papenfuss notes in “Horrified Walter Reed Attending Physician Slams Trump’s Drive-By Risk To Secret Service” at HuffPo: “An attending physician at Walter Reed Medical Center blasted the “astounding irresponsibility” of President Donald Trump, saying he put the lives of Secret Service agents at risk to wave at his fans from his motorcade on Sunday…Trump made a spur-of-the-moment decision to briefly leave the hospital where’s he being treated for COVID-19 to do a “surprise” drive-by in the presidential SUV to wave to supporters — whom he called “great patriots” — gathered outside. “Every single person in the vehicle during that completely unnecessary Presidential ‘drive-by’ just now has to be quarantined for 14 days,” Dr. James Phillips tweeted. “They might get sick…Commanded by Trump to put their lives at risk for theater. This is insanity,” Phillips said of the agents accompanying Trump…Phillips — the head of Disaster and Operational Medicine in the Emergency Medicine Department of the George Washington University School of Medicine —  noted that the SUV is hermetically sealed to protect against chemical attacks. “The risk of COVID-19 transmission inside is as high as it gets,” other than during medical procedures, he added.”

Trump’s mismanagement of the pandemic could hurt with senior voters. As Harold Gold writes at Marketwatch, “In an interview, economist Teresa Ghilarducci, a professor at The New School in New York City and one of the nation’s leading experts on retirement, told me that half—that’s right, half—of Americans aged 55 and up will retire in poverty or near poverty…“Our data is showing that, because of the COVID recession, about 50% of workers over the age of 55 will be poor or near-poor adults when they reach 65,” she said.” Gold asks, “What’s behind this? People losing their jobs and health insurance because of COVID-19? Or losing the employer match on their 401(k) contributions? Or having to tap into retirement savings to cover daily expenses? “All of the above,” said Ghilarducci…But it starts with job losses. “Older workers are losing their jobs at a faster rate, relative to younger people and relative to where they had been before than they were in the Great Recession,” she told me…A report done by the New School Retirement Equity Lab found that over half of older unemployed workers may be forced into involuntary retirement. Nearly three million older workers have left the labor force since March and if the economic disruptions caused by COVID-19 continue, another million could join them soon…“

According to Data for Progress, “Our new Senate polling is showing really good signs for Democrats. We find:

Data for Progress also noted of the first presidential candidate debate that “Viewers also thought Biden was more “presidential” than Trump by an even wider margin (53-33). Crucially, this includes Independents and Third Party voters, who rated Biden as more presidential by a 20-point margin…But Biden didn’t just win the debate on character — he won it on policy grounds as well. Voters think he’ll handle race relations, the coronavirus pandemic, the integrity of our elections, and the Supreme Court better than Trump. That said, respondents narrowly preferred Trump’s position on the economy.” A chart: 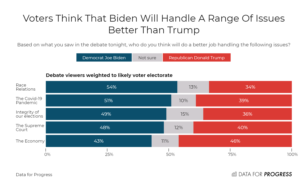 In “Post-debate CNN poll: Six in 10 say Biden won the debate,” Jennifer Agiesta writes at CNN Politics: “Six in 10 debate watchers said former Vice President Joe Biden did the best job in Tuesday’s debate, and just 28% say President Donald Trump did, according a CNN Poll of debate watchers conducted by SSRS…In interviews with the same voters conducted before the debate, 56% said they expected Biden to do the better job while 43% expected that Trump would…About two-thirds said Biden’s answers were more truthful than Trump’s (65% Biden to 29% Trump), and his attacks on the President were more frequently seen as fair. Overall, 69% called Biden’s attacks on Trump fair while just 32% said Trump’s attacks were fair…A majority of debate watchers (57%) said that Tuesday’s debate did not affect their choice for president, while the minority who said they were moved were more apt to say they became more likely to vote Biden (32%) than Trump (11%).” However, “The voters who watched the debate were more partisan than Americans as a whole — 36% identified as independents or non-partisans compared with around 40% in the general public, and the group of debate watchers was more Democratic than a typical survey of all adults, with 39% identifying as Democrats and 25% as Republicans.”

“Joe Biden’s national lead over President Donald Trump nearly doubled after Tuesday’s presidential debate, with voters saying by 2-to-1 that Biden has the better temperament to be president, according to a new NBC News/Wall Street Journal poll. As Mark Murray writes at nbcnews.com, “The poll was conducted in the two days after the unruly and insult-filled debate Tuesday but before Trump tested positive for Covid-19 and was hospitalized Friday at Walter Reed National Military Medical Center…Biden is now ahead of Trump by 14 points among registered voters, 53 percent to 39 percent — up from his 8-point lead in the previous poll, before the debate…The biggest declines for Trump were among seniors (who now back Biden by 62 percent to 35 percent) and suburban women (58 percent to 33 percent)…And men 50 years and older moved to a 1-point advantage for Biden in the latest poll, compared to a 13-point advantage for Trump in the pre-debate NBC News/WSJ poll.”

Regarding Trump’s Supreme Court pick, Murray adds, “The poll asked voters about Trump’s pick to succeed the late Ruth Bader Ginsburg on the Supreme Court, Amy Coney Barrett…Thirty-five percent of registered voters say they support Barrett’s nomination, while 33 percent oppose it; 30 percent say they don’t know enough about her…The findings are similar to the first NBC News/WSJ numbers on Trump’s 2018 Supreme Court pick, Brett Kavanaugh, whom the Senate confirmed by a narrow 50-48 vote…In a separate question, 50 percent of voters say they would prefer the Senate to wait to fill the Supreme Court seat until there’s a winner in the presidential contest, while 38 percent want a vote before the election.”

Kyle Kondik and J. Miles Coleman explain why “Biden Lead Looks Firmer as Midwest Moves His Way” at Sabato’s Crystal Ball, and note, “Joe Biden is now over 270 electoral votes in our ratings as we move several Midwestern states in his favor.” Kondik and Coleman move Ohio and Iowa from “leans Republican” to “toss-up” and they now have Minnesota moving from” leans Democratic” to “likely Democratic,” and they move Wisconsin from “toss-up” to “leans Democratic. They add, “Changes in the battle for Congress benefit Democrats almost exclusively. We’re moving two Senate races in their direction, as well as several House contests.” Their updated Electoral College map: 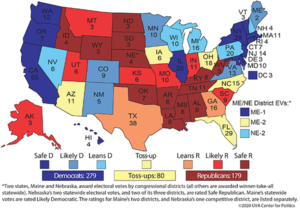