Democratic strategist and CNN political commentator Paul Begala, who served as a political consultant for President Bill Clinton has some strong feelings about Democratic messaging at this political moment. Begala, author of “You’re Fired: The Perfect Guide, writes in “Trump declares war on Social Security, Medicare” at CNN Opinion that Trump’s “executive action suspending collection of payroll taxes hands the Democrats the kind of issue that can sink a candidacy. It is nothing less than a declaration of war on Social Security and Medicare. The payroll tax funds those two vital and beloved programs. When you suspend collection of the revenue that funds those two programs, you endanger their viability. Say it with me, Democrats: Donald Trump wants to gut Medicare and Social Security…this is not his first attempt. His 2021 and 2020 budgets each proposed deep and painful cuts in Social Security and Medicare. How deep? How painful? $2 trillion over ten years, according to the Wall Street Journal. What a coincidence: that’s about how much Trump’s 2017 tax cut for corporate America cost. According to the nonpartisan Congressional Budget Office, Trump’s corporate tax cut has a price tag of $1.9 trillion...Democrats can run on this and win. I was so confident of this — even before Trump’s latest attempt to gut Social Security and Medicare, that I devote an entire chapter of my new book (YOU’RE FIRED: The Perfect Guide to Beating Donald Trump) to begging Democrats to run on Trump’s attempts to cut Social Security, Medicare, and Medicaid. The title of the chapter is: “This Chapter Will Beat Trump: I Guarantee It.”

Asma Khalid explains “How This Conservative Florida County Became A Surprise 2020 Battleground” at npr.org: “Duval County, a traditionally conservative area in Florida’s northeast corner along the Atlantic Ocean, hasn’t voted for a Democratic president since Jimmy Carter in 1976. But in recent presidential elections, it’s begun tilting more toward the Democratic Party. In 2016, Trump won Duval County by 1.5 percentage points — one of his slimmest margins in the state…Pollsters, political scientists and party leaders all agree the county’s changing landscape is largely due to demographics and grassroots organizing. Stronger turnout among the county’s relatively large Black population combined with an influx of college-educated transplants has turned this once-reliable red county into a contested political battleground in a must-win state for Trump…In the late 1960s, Duval County and the city of Jacksonville merged into one entity, creating a large sprawling city that feels like an overgrown suburb. Trump has struggled in recent polling with suburban voters nationwide, and the same trend seems evident in Duval…Beyond demographics, activists point to the work that progressive groups like Indivisible and the New Florida Majority have been doing on the ground. Traditionally, after a midterm, the state party packs up and goes home, but after the 2018 elections, half a dozen Democratic staffers stayed on the ground to prepare for the presidential race.”

Khalid continues: “Data from the Florida Chamber of Commerce finds the two states where most Duval transplants have arrived from in recent years are New York and Pennsylvania. The assumption is these outsiders are bringing their more liberal politics to the South. Voter registration data seems to somewhat align with this theory…But the shift is not tied solely to new college-educated voters moving into the area. The new chair of the Democratic Party elected last year is a 28-year-old Black man, the youngest leader in the local party’s history. The average age in Duval is younger than many other Florida counties, and young voters tend to be more liberal…At the same time, there are some Republicans who have grown disenchanted with the president. While this frustration will not necessarily translate into votes for Biden, it has become one factor in Duval’s changing landscape…In Duval County, there are more registered Democrats than Republicans, but the GOP still usually wins elections. Jacksonville has a Republican mayor. The GOP has a majority on the city council as well. But in 2018, Andrew Gillum, the Democratic candidate for governor, won Duval County — a first since the 1980s…”Arguably the single most important county in the single most important state in the most important election in a century is Duval County,” said Dean Black, the GOP county chair.”

Chris Cillizza weighs in on “The *final* Joe Biden VP rankings” at CNN Politics, and noting that “these picks are based on conversations with knowledgeable sources, reporting and just some educated guesswork.” Cillizza’s short list rankings are as follows at present: 1. Sen. Kamala Harris 2. Foprmer  UN ambassador Susan Rice 3. Gov. Gretchen Whitmer 4. Sen. Tammy Duckworth and Rep. Karen Bass. Regarding his bet on Harris, Cillizza writes, “She has the best combination of skills: She’s a charismatic candidate and debater who has been vetted on the national stage and would be a historic pick as the first African American and Indian American candidate on a national ticket…Does she have drawbacks? Yes. (Who doesn’t?) Her record as attorney general in California is ripe for the picking (as The New York Times noted Sunday morning). And her performance as a candidate in her own right — after an initial burst of promise — is worrisome…But net it all out, and Harris still makes the most sense for Biden.”

Amy Walter shares some thoughts concerning “What Biden Really Needs From a VP Pick” at The Cook Political Report: “At this moment of racial reckoning, it would be riskier for Biden not to choose a woman of color as his Vice President. The choice of Michigan Gov. Gretchen Whitmer or Sen. Elizabeth Warren feels like the political equivalent of ‘not reading the room.’…Given Biden’s age, his VP pick will also get more attention than usual from voters. After all, it’s not inconceivable that this person will be asked to step in to take over the most stressful job in the world. This isn’t the time for outsiders. Someone who understands how Washington works — and has been a part of it — is a plus…The four most-oft mentioned Black women; former UN Ambassador Susan Rice, Reps. Val Demings and Karen Bass and Sen. Kamala Harris, all have Washington experience. But, none of them have been tested and vetted the way Harris has. She didn’t run a flawless campaign. But, she has experience on the presidential stage that the others don’t. She’s not a household name, but she is familiar. And, while she doesn’t have the depth of White House experience as Rice, she has notably less baggage.”

E. J. Dionne, Jr. urges former Vice President Biden to accept the challenge presented by Trump’s ludicrous-on-so-many-levels charge that, if elected, Biden would “hurt God.” As Dionne writes in his syndicated Washington Post column, “Never has a politician accorded his opponent so much power. Last week, President Trump said that if former vice president Joe Biden won the White House, he would “hurt God.”..Wow! What supernatural chops! Trump did not specify how exactly a mere mortal could “hurt” the Almighty, but he warns Biden would create a world of “no religion, no anything.”…“He’s against God. He’s against guns. He’s against energy, our kind of energy,” said Trump. Yes, energy sources are now polarized between red and blue, and the Supreme Being is part of it…Here’s the good news: Trump’s truly idiotic language and Biden’s own faith open new opportunities to push back against forms of religious warfare that have done grave damage both to religion and to our politics. Trump’s theology-free theology and his reduction of God to a political consultant’s role offer Biden, and progressives more generally, a large opening for reconciliation. Think of it as a Providential moment.”

Charlie Cook offers this observation at The Cook Political Report: “The data suggest though that the tolerance that voters had for Trump’s unconventional style may have ended with his handling—or mishandling—of the pandemic, and the killing of George Floyd, and subsequent nationwide demonstrations. It appears that among those outside his base, his credibility has taken a beating, his judgement and motives suspect. Trump’s ability to draw support beyond his base was predicated on keeping an economic tailwind that looks unlike to exist by November…The issue of reopening the economy brings all of these to a head. Last month, the ABC/Washington Post poll asked, “What do you think is more important—trying to control the spread of the coronavirus, even if it hurts the economy, or trying to restart the economy, even if it hurts efforts to control the spread of the virus?” Just 33 percent chose Trump’s oft-stated course of restarting the economy as soon as possible, while 63 percent chose the former option. In fact, 52 percent responded to a follow-up question by saying they strongly agree with the option that suggests controlling the virus, twice as many as the 26 percent who strongly wanted to reopen the economy. On one of the most important and consequential policy choices one can imagine, a large majority took the opposite view of the president. That suggests big problems.”

Kyle Kondik writes at Sabato’s Crystall Ball: “We rank the top dozen Senate seats in order of their likelihood of flipping. Of the 12, 10 are held by Republicans, underscoring the amount of defense that the GOP will need to play in order to hold their majority…We have two Senate rating changes, one in favor of each party…Overall, the battle for the Senate is close, although we would probably rather be the Democrats than the Republicans at the moment. The reason is basically that, of the three decisive Toss-ups in our ratings, we would probably pick the Democrats in at least two of them right now: both Maine and North Carolina are closer to Leans Democratic than Leans Republican. If Democrats win those, as well as Arizona and Colorado (while losing Alabama), they would forge a 50-50 tie, with what they hope is a Democratic vice president breaking ties…Beyond these top races, the Democrats also have better second-tier targets than the Republicans: namely, the regular race in Georgia as well as Montana. We were prepared to add Kansas to that list, too, but Roger Marshall seems to have spared the GOP that additional headache.” 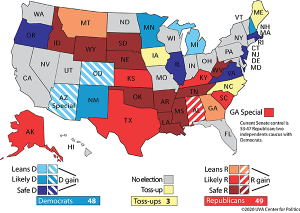