In their article, “No excuse not to fix broken Ga. election system by Nov. 3,” Alan Abramowitz and Jonathan Krasno write “There are lots of ways to describe Georgia’s primary election, but no one would argue that it was anything less than an enormous embarrassment for the state. Some voters, particularly Black voters, were forced to wait for hours to cast their ballots while others breezed through without any trouble…This is not the way democratic elections are supposed to work. But things like this keep happening here, and no one should have any confidence that they are going to stop anytime soon since the state government now claims it is not responsible for fixing them. The question is whether Georgia’s business community is willing to tolerate being associated with what looks at best like sheer incompetence or at worst deliberate racism…We are talking about the tourist industry that draws millions of visitors to attractions like Savannah’s historic district and the Atlanta Aquarium…We are talking about leading brands headquartered in Georgia like Coca-Cola, Home Depot and UPS. All of these, plus plenty of smaller companies, have long told potential employees and customers of the advantages of their state: warm weather, low taxes, cosmopolitan Atlanta, the New South, etc…Failed elections tinged with racism do not fit with that picture…For many business leaders, that alone will offend. For all of them, there ought to be the uncertainty whether connection with Georgia will affect their bottom line…Just ask businesses in North Carolina. Its “bathroom bill” launched a boycott movement that cost the state hundreds of millions of dollars in conventions…An even better example comes from Indiana, where then-Gov. Mike Pence signed a “religious freedom” bill that critics charged gave businesses and organizations the right to discriminate against LGBTQ people. While a few businesses were overjoyed with the law, the vast majority were appalled because they felt it cast their state in a poor light…They fought back. Angie’s List, headquartered in Indianapolis, canceled an expansion of its offices that would have brought an additional 1,000 jobs to the state. Salesforce suspended all activity in the state. The NCAA announced its intention to reevaluate its business there…Etc. Within months, the Legislature passed an additional law adding LGBTQ protections.”

It’s a month old, but, according to “Public Opinion on Single-Payer, National Health Plans, and Expanding Access to Medicare Coverage” by the Kaier Family Foundation, “A hallmark of Senator Sanders’ primary campaign for President in 2016 was a national “Medicare-for-all” plan and since then, a slight majority of Americans say they favor such a plan (Figure 4). Overall, large shares of Democrats and independents favor a national Medicare-for-all plan while most Republicans oppose (Figure 5). Yet, how politicians discuss different proposals does affect public support (Figure 6 and Figure 7). In addition, when asked why they support or oppose a national health plan, the public echoes the dominant messages in the current political climate (Figure 8). A common theme among supporters, regardless of how we ask the question, is the desire for universal coverage (Figure 9).” However, “KFF polling found that when such a plan is described in terms of the trade-offs (higher taxes but lower out-of-pocket costs), the public is almost equally split in their support (Figure 11).  KFF polling also shows many people falsely assume they would be able to keep their current health insurance under a single-payer plan, suggesting another potential area for decreased support especially since most supporters (67 percent) of such a proposal think they would be able to keep their current health insurance coverage (Figure 12).”

Further, The Kaiser Family Foundation notes, “KFF polling finds more Democrats and Democratic-leaning independents would prefer voting for a candidate who wants to build on the ACA in order to expand coverage and reduce costs rather than replace the ACA with a national Medicare-for-all plan (Figure 12). Additionally, KFF polling has found broader public support for more incremental changes to expand the public health insurance program in this country including proposals that expand the role of public programs like Medicare and Medicaid (Figure 13). And while partisans are divided on a Medicare-for-all national health plan, there is robust support among Democrats, and even support among over four in ten Republicans, for a government-run health plan, sometimes called a public option (Figure 14). Notably, the public does not perceive major differences in how a public option or a Medicare-for-all plan would impact taxes and personal health care costs. However, there are some differences in perceptions of how the proposals would impact those with private health insurance coverage (Figure 15). KFF polling in May 2020 finds about half of Americans support both a Medicare-for-all plan and a public option (Figure 16). So while the general idea of a national health plan (whether accomplished through an expansion of Medicare or some other way) may enjoy fairly broad support in the abstract, it remains unclear how this issue will play out in the 2020 election and beyond.”

A new anti-Trump ad from The Lincoln Project:

From”Why you shouldn’t believe Trump missed a guy chanting ‘white power’ in the video he shared” by Chris Cillizza at CNN Politics: “Why shouldn’t you believe the idea that Trump simply missed a guy chanting “white power” in the first few seconds of a video that he shared with his 82.5 million supporters on Twitter? Because, well, history — both recent and not-so-recent…From a housing discrimination lawsuit in the 1970s to his comments about the “Central Park 5”to his assertion that “both sides” were to blame for white supremacist violence in Charlottesville, Virginia, in 2017 — and dozens of smaller moments in between — Trump has again and again showed he simply does not get it when it comes to America’s ongoing racial problems. Or, seen through another lens, that he gets it all too well…And, of late, with his political fortunes flagging badly, Trump has leaned more and more heavily into barely-coded appeals to racist sentiment in the country…In fact, the ways in which he has worked to weaponize race and exploit racial divisions for his own personal political gain suggests that all Trump did on Sunday morning was say out loud what he has been saying slightly more quietly and subtly for years…”‘White power’ isn’t a dog whistle,” tweeted Soraya Nadia McDonald, the culture critic at The Undefeated. “It’s an air horn.”

“Do Campaign Visits Pay Off?” Analyzing “Evidence from the 2016 Presidential Election,” Alan I. Abramowitz, author of “The Great Alignment: Race, Party Transformation, and the Rise of Donald Trump,” addresses the question at Sabato’s Crystal Ball: “With infection levels rising in many states and several Trump campaign staffers having tested positive for COVID-19, it is not clear how many more live rallies the Trump campaign will be able to conduct between now and Election Day. The Biden campaign currently has no plans to hold live campaign rallies. However, the findings reported in this article indicate that whether either campaign holds live rallies and whether one holds more rallies than the other will probably have little or no impact on the election results at the state level. Campaign events may have other benefits such as energizing supporters and stimulating donations, but in 2016 they did not appear to have any effect on how well candidates did in the states in which they were held…Campaigns may derive indirect benefits from rallies, though, such as voter contacts, press coverage, and donations. But there’s not much evidence to show that the number of rallies in a given state had an impact on the results.”

“Far from adjusting to different times, Trump is betting — as he did in 2016 and as the tea party did in the Obama years — that the leftover right-wing slogans from the 1960s (see: “LAW AND ORDER!”) and a defense of Confederate “heritage” will win him the overwhelming majorities among older white voters that he needs to carry battleground states,” E. J. Dionne, Jr. writes in his Washington Post column. .\”But this isn’t working, and not only because former vice president Joe Biden is an older white guy who is rather hard to tar as an agent of the revolutionary left. It’s also failing because many older voters are petrified of what Trump’s astonishingly inept handling of the coronavirus pandemic means for their health and their very lives…But more importantly for the long run, the 2020 electorate is not the electorate of the tea party wave, or even of 2016. The new generations that Obama realignment enthusiasts acclaimed 12 years ago are, at long last, the dominant groups in the electorate…As a Pew Research Center study showed, members of Gen Z (born after 1996) couldn’t even vote in 2012 and made up just 4 percent of the 2016 potential electorate. But they will account for 1 in 10 eligible voters this year. Millennials (born between 1981 and 1996) will constitute 27 percent of this year’s eligible voters. In combination with Gen Xers (born 1965 to 1980), more than 6 in 10 of this year’s electorate will be younger than 55…Three things are true: (1.) The post-boomer generations are more diverse than the rest of the electorate. (2.) Younger whites are more liberal than their elders on matters of racial justice — as a Washington Post-Schar School poll showed this month — and on social issues. (3.) The share of millennials who vote will be higher than in Obama’s elections simply because they are older than they were in 2008 or 2012.

A reminder for any undecided voters you may know: 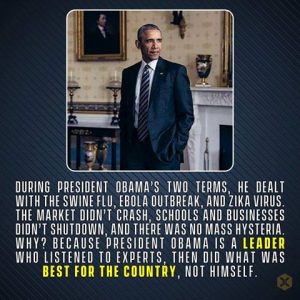