On his Facebook page, Ruy Teixeira comments on “The Single Most Important Stat from the New NBC/Wall Street Journal Poll,” and notes, “In this poll, Biden leads Trump by 7 points. But the most interesting finding is Biden’s support among those who are not favorable toward either him or Trump. In 2016, Trump carried those unfavorable toward both him and Clinton by 17 points. This time ’round Biden is carrying those who don’t like either him or Trump by 50 points. 50 points! I would characterize this as a good sign.”

“President Trump has chosen his pandemic re-election strategy,” Thomas B. Edsall writes at The New York Times. “He is set on unifying and reinvigorating the groups that were crucial to his 2016 victory: racially resentful whites, evangelical Christians, gun activists, anti-vaxxers and wealthy conservatives…Tying his re-election to the growing anti-lockdown movement, Trump is encouraging a resurgence of what Ed Kilgore, in New York magazine, calls “the angry anti-government strain of right-wing political activity that broke out in the tea-party movement” — a movement now focused on ending the virus-imposed restrictions on many aspects of American life…Steve Schmidt — a former Republican consultant and prominent Never Trumper who served as a senior adviser to John McCain’s 2008 presidential bid — described the shape he saw Trump’s 2020 re-election drive taking. As the “administration continues to lie, fumble and flounder,” Schmidt wrote in an April 17 Twitter thread,..”get ready for the noxious blend of Confederate flags, semiautomatic weaponry, conspiracy theorists, political cultists, extremists and nut jobs coming to a state Capitol near you.”

If you were wondering “What Would Virtual Democratic And Republican Conventions Mean For The 2020 Presidential Race?,” A FiveThirtyEight chat surveys the possibilities, including this observation by Nathaniel Rakich : “Sabato’s Crystal Ball had a great article the other day on this and how remote conventions could work. I recommend reading the whole thing, but the TLDR version is that the four important formalities that a convention must address — certifying delegates, approving the convention rules, electing convention officers and, of course, nominating the presidential and vice-presidential candidates — could all be done remotely but will require lots of advance planning…As for the glitzy, self-promoting elements … I think that’s more of an open question.” Julia Azari says, “It’s a really tricky question in some ways. Conventions are kind of a holdover from a past era when delegates reallypicked the nominee, but the transition from “conventions as real events” to “conventions as infomercials” has been kind of messy and slow…Geoffrey Skelley notes, “It’s tough to say what the impact might be, but I can see why the parties don’t want to go virtual if they don’t have to. There’s potentially less coverage of the event and less of a chance to get their message across.”

Another good Biden ad, this one from The Lincoln Project, an oganization of anti-Trump Republicans, including Steve Schmidt, George Conway and Rick Wilson:

From “Biden Quiet on Nationwide Vote by Mail. That’s on Purpose” by Scott Bixby and Hunter Woodall at The Daily Beast: “As concerns have risen about voter safety in the midst of a global pandemic, the past few weeks have seen proposed solutions put forward by voter-rights organizations, Democratic lawmakers, and almost the entirety of former Vice President Joe Biden’s short list of potential running mates…But Biden himself has held back on endorsing any particular plan for expanding access to mail-in ballots—a decision that campaign sources told The Daily Beast is by design…Last week, Sen. Kamala Harris of California introduced the “VoteSafe Act,” which would require states to permit no-excuse mail-in voting by absentee. In March, Sen. Amy Klobuchar of Minnesota introduced the “Natural Disaster and Emergency Ballot Act of 2020,” which would do the same, and reimburse states for additional costs of administering elections during the pandemic.” Biden made the right call because his endorsement would likely feed media distortion of the nonpartisan merit of voting by mail, since the need for the reform before the election is critical in light of the pandemic.

Mackenzie Zlatos spotlights “10 Republican Senators who are vulnerable to being swept out with Trump in November” at frontpagelive.com. Noting that “35 Senate seats are up for election on November 3: 12 Democrat incumbents and 23 Republican incumbents (along with two special elections),” Zlatos argues that Senate seats now occupied by the following Republicans are up for grabs: Susan Collins (ME); Martha McSally (AZ); David Perdue (GA); Joni Ernst (IA); Mitch McConnell (KY); Cindy Hyde-Smith (MS); Thom Tillis (NC); Lindsey Graham (SC); John Cornyn (TX); and Cory Gardner (CO). Zlatos provides “Why he (she) might be in trouble” nuggets for each of the GOP Senators, like this one for Tillis: “Tillis was booed while attending a Trump rally in North Carolina.”

Seth Moskowitz writes at Sabato’s Crystal Ball: “In order for Democrats to win an outright majority in the Senate and overcome the current 53-47 Republican split, they need to net four seats. In the case of a Senate tie, however, the vice president casts the tie-breaking vote. Given the 2020 Electoral College and Senate maps, it is difficult to imagine a plausible scenario whereby Democrats net four Senate seats but do not win the presidency and the tiebreaking power in the Senate. So three is the real magic number for Senate Democrats.” Here’s the current Senate election map, according to Sabato’s Crystal Ball: 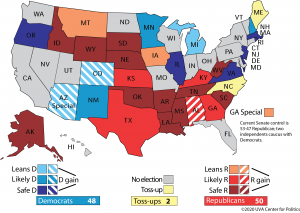 Would you like to get election reminders via text on your cell phone? How about basic voting information for every state by hovering over an interacti ve map of the U.S. or Covid-19 voting information? Or maybe get a toolkit providing assistance for hosting a voter registration drive in your community? Or if you just want to register, check your registration status or updated poll location? You can also get “A suite of modern digital tools designed to empower organizations to drive civic action and track progress,” or take part in a “Democracy Class” with lesson plans designed to educate high schoolers about the importance of voting, local elections, the 2020 Census and other topics. All of this can be accessed through the Rock the Vote website.